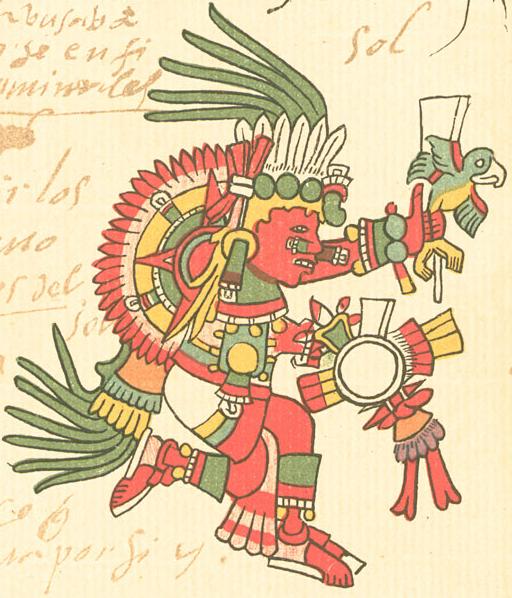 An image of Tonatiuh from a codex.

Tonatiuh is the Aztec sun god (or more accurately the fifth sun god, as the Aztecs believe that at the end of each age, the sun is destroyed and remade), however in reality he is another usurper, gaining power through heathen rituals. See the wikipedia article on Tonatiuh for more details.

Tonatiuh is the motion of the Sun. The Aztechs offered human sacrifice to him. That's all we know.

We don't really know why, although western scholars in the 1800's speculated that this was to ensure the orderly progression of the Sun. It is just as likely (as modern scholars have speculated) that he was symbolic of death (the passage of the sun at night) and that the sacrifices offered were to stave off death.

The Aztechs made human sacrifices to most of their gods towards the end of their civilization. This may have been related to a rapidly dropping food supply that made them abandon their great cities, they couldn't feed all their citizens and sacrifices served both to try to appease the gods and to cut down population. We know that at least some of the humans offered for sacrifice were unwilling (they appear to be from other tribes in the pictures).

"Tonatiuh demands blood. He promises that in return for the blood shed from human sacrifice and heathen rituals, he (the sun) will continue going round the sky. This is a lie, as he is not the sun and only draws arcane power from these rituals."

Tonatiuh's clergy are all Aztec Priests. They are usually bloodstained and filthy, and not beyond eating the flesh of their foes. His temples are impressive stepped temple-pyramids covered in bloodstains from sacrifices.