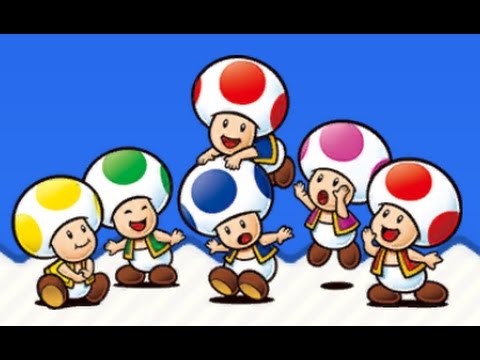 Toadstools, also known as mushroom retainers and mushroom people, are a peaceful race of mushroom-like humanoid characters and the dominant species of the Mushroom Kingdom. Toadstools reside in many towns and cities throughout the workd and have a capital named after them called Toad Town. Most Toadstools are citizens of the Mushroom Kingdom, and many also work as loyal servants of the kingdom's ruler Princess Peach. Toadstools are an industrious people and that's why most of the best towns and businesses exist where Toadstools live. Most Toadstools do not appreciate the spotlight and thus tend to play supporting roles in adventures.

Racial Traits: +2 Cha, -2 Str; 30 ft speed; Small; Toadstools are born with a large mushroom cap on their head. These can vary into 6 different colors which each have their own unique characteristics.

Red: Red Toadstools are the most common and the most diverse in their skill set. +4 skill points at 1st level and then +1 skill point at every level after 1st.

Yellow: Yellow Toadstools are historically messengers because they tend to be faster. +5ft to movement speed.

Green: Green Toadstools seem to be full of life. +1 to max hp at every level.

Purple: Purple Toadstools are rare and mysterious. +3 to max mp at every level.

Abilities: Charisma is largely the most important ability for a Toadstool because it increases the potency of their shroom-magic. Toadstools are also great in social situations and running businesses. The better their Charisma, the better they are at these.

Class Defense: Toadstools have a B column Defense bonus.

Shroomcraft: Using shroom-magic, Toadstools have learned to concentrate their spores into solid substances called shrooms. These shrooms contain the magic power of the Toadstool who crafted the item. Some Toadstools use this craft as a profitable business and others use it to help fellow adventurers. Shroomcraft is a major reason why the best hospitals in the world are in the Mushroom Kingdom.

Expert: Toadstools can craft shrooms at three times the mp cost of any Toadstool spell.

Cha Mod Effects: A Toadstool's Cha Mod is added to his/her healing magic affects and other factors in their shroom magic. For example, Netty has a Cha Mod of +3 and casts Salve. The healing effect will be 1d8+3. See spell Descriptions for further information.

6th level: - mp cost = 15: White Wind - 3d8 healing, all within 20ft radius of caster. Life - resurrect a fallen target at 1/4 max hp, touch. Regen - target heals #(1d8+caster's Cha Mod) each turn for 5 turns. Frighten/Confuse/Enrage - range 100ft and target must be visible, target must succeed on Will save or take on chosen negative status by caster for #(caster's Cha mod) of turns. Shell - all friendly targets within a 10ft radius increase AC by 2, lasts # of rounds = caster's Cha Mod.

10th level: - mp cost = 30: Cura - 10d8 healing, touch. Panacea - removes most negative statuses. Blind/Silence/Sleep - range 100ft and target must be visible, target must succeed on Will save or take on chosen negative status by caster for #(caster's Cha mod) of turns. Venom - target takes damage equal to caster's Cha Modx3 each turn until healed, touch, Fort save negates. Stop - causes target to become motionless for #(caster's Cha mod) of turns, 50ft range but target must be visible, Reflex save negates.

20th level: - mp cost = 90: Grace - resurrect all fallen targets within a 20ft radius of caster at 1/4 max hp. Mustard Bomb - any movement by affected target causes it's body to overheat and target dies, touch, Reflex save negates. Petrify - target turns to stone, 30ft gaze range, Fort save negates. Death - upon a successful physical attack target instantly dies, Will save negates instant death but attack does normal damage. Ruby Light - casts Reflect on all friendly targets within a 20ft radius of caster. Holy - shoots a holy ray at a target and upon contact does 20d6, 75 ft range, Reflex save for half damage.