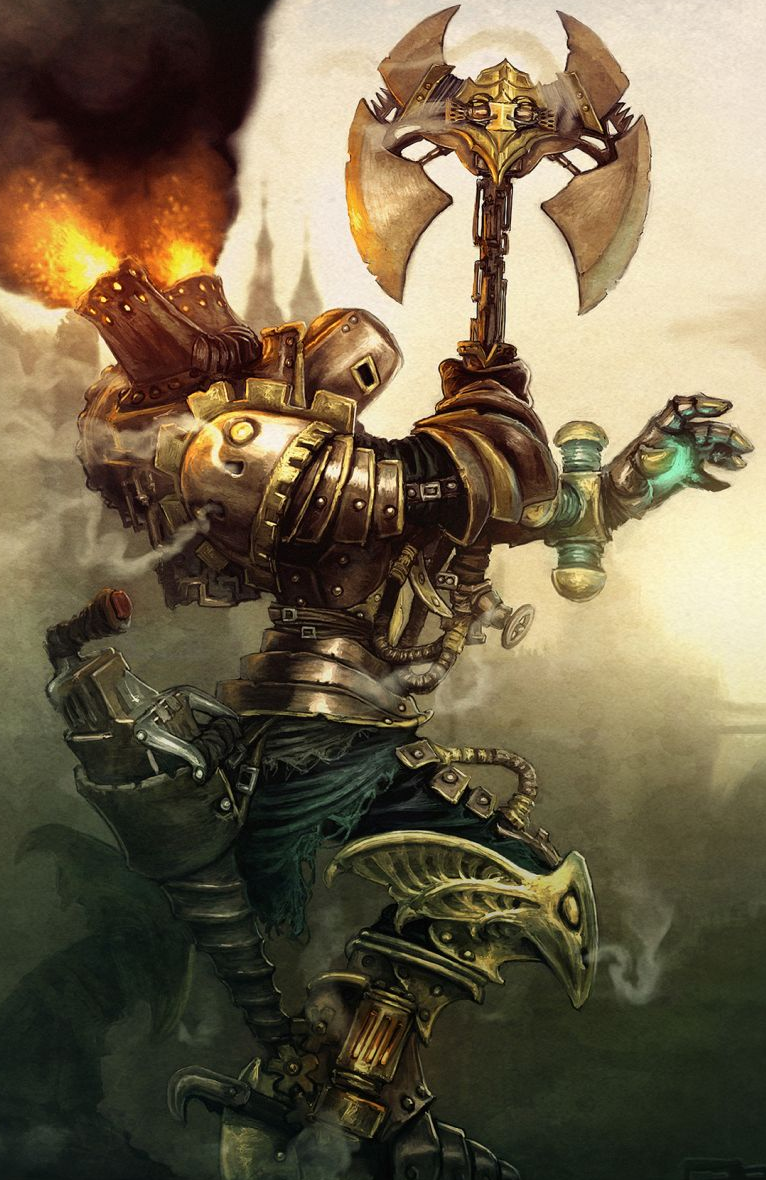 A Tinman with a greataxe burns off some steam. Art by Joel B.

A Tinman is an individual unlucky enough to have been entombed within a steam-powered mechanical suit. The most likely reason for this is severe bodily trauma and loss of limbs and/or muscle control. The class abilities require, at minimum, having lost both arms.

The Tinman is a front-line fighter. Though he can be outfitted to handle ranged combat, he is designed to be in the thick of the fighting. He crushes his opponents with raw mechanical might and absorbs attacks to spare the more lightly armored members of his party.

Abilities: Strength and Constitution are the most important abilities for the Tinman. Dexterity can be useful sometimes, but the other stats aren't necessary at all.

Races: Any race with the level of technological advancement required to produce steam-powered prosthetics can produce Tinmen. This will vary depending on your campaign setting.

Alignment: The Tinman can be of any alignment.

Weapon and Armor Proficiency: The Tinman is proficient with all Simple and Martial weapons, as well as firearms if the campaign setting allows them. He is proficient with no armor other than his Tinman Suit, but is able to use shields (light, heavy).

Tinman Suit: The suit worn by the Tinman is what preserves his life and keeps him mobile. It functions as a suit of Full Plate armor that cannot be removed. It can be enchanted and upgraded. The suit provides this bonus, even when caught flat-footed. The suit also runs on water. The tank starts holding 15 units of water and the tank size increases as the Tinman gains levels. Should the suit ever run out of water, the Tinman is Fatigued and cannot use any of his steam-powered abilities. Because of his suit and the water stored within, the Tinman suffers a -10 to saves against any electrical effects. The Tinman also gains a natural Slam attack based on his size. 1D6 for Medium, increased or decreased as is appropriate.

Flame Resistance/Immunity: The Tinman's suit is virtually fireproof. As such, he gains FR-5 at first level, which increases by 5 every 5 levels until 20th, where it becomes Flame Immunity.

Steam Breath: The Tinman is able to vent scalding steam from the face plate of his suit. This does 1D4 damage per odd-numbered level in a 30-foot cone and uses 1 unit of water.

Steam Burst: The Tinman may vent a cloud a super-heated steam from the various pipes and grilles on his suit. This deals 1D6 damage per 3 levels in a 15-foot burst centered on the Tinman. This uses 1 unit of water.

Superheat Suit: The Tinman can superheat his suit by releasing the steam stored within, but trapping it just under the surface of the suit. Anything making a natural or unarmed attack against the Tinman, or anyone the Tinman strikes with his natural slam attack, takes 1D6 fire damage per 3 levels. Consumes 1 unit of water per round until deactivated.

Full Steam Ahead: This ability allows the Tinman to charge at three times his base land speed and treat himself as one size category larger for any checks made during the charge. Consumes 1 unit of water.

Windmill Arms: This ability allows the Tinman to rotate his arms rapidly in 360 degree arcs. He gives up all his normal attacks for the round and instead can make one attack against each opponent within melee range at his highest base attack bonus. Consumes 2 units of water.

Steam Jump: The Tinman may expel steam from his feet to gain a +10 bonus to a single Jump check. Consumes 1 unit of water.

Collateral Damage: This steam powered attack allows the Tinman to ignore up to 10 points of an object's hardness. Consumes 1 unit of water.

Propelled Arms: The Tinman may propel one or both of his arms forward using jets of steam. The arms are attached to his shoulders by a 30-foot length of chain, granting the Tinman a ranged touch attack that deals damage equal to his natural weapon damage. This stacks with the fire damage granted by Superheat Suit. Consumes 1 unit of water per arm propelled.

Steam Jets: The Tinman may expel steam out his hands and feet to gain Clumsy flight at half his base land speed. Consumes 1 unit of water per round.

Propelled Arm Whirlwind: The Tinman is able to combine his Windmill Arms and his Propelled Arms abilities. He may forfeit his attacks for the round to make an attack against every enemy within 30 feet by extending his arms to the ends of their 30-foot chains and whipping them around violently. Consumes 4 units of water.

Burn Off Steam: An upgraded version of Superheat Suit. The Tinman is able to burn a tremendous amount of water to give himself 20 feet of bonus movement speed and +4 Strength. This ability costs 4 units of water per round. If the Tinman should run out of water while this ability is active, he becomes Exhausted instead of Fatigued.

The only way to become an Ex-Tinman is to be killed and then revived through magical means. Assuming this restores his body to its natural state, he loses all Tinman class abilities and is reduced to a Warrior of equivalent level until he can either have a new suit made or find his old one. However, most individuals would be glad to have their original body back. 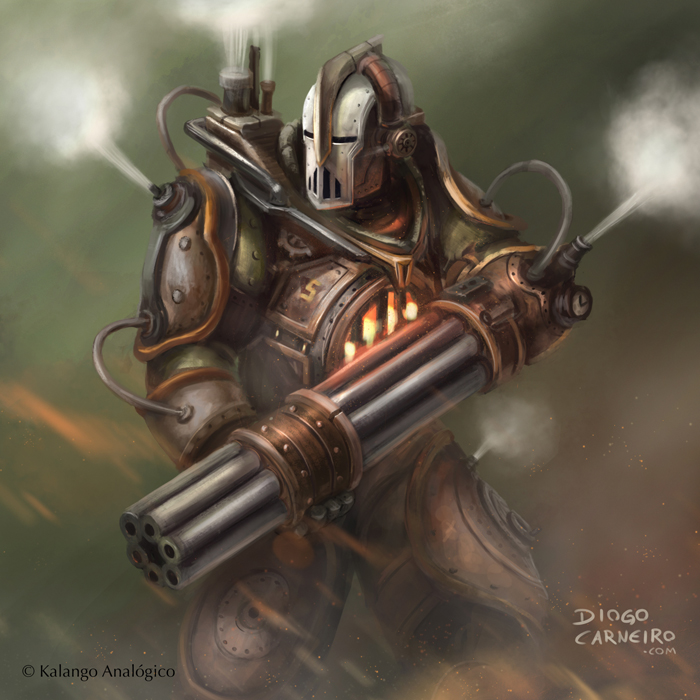 This Tinman's lower arm has been replaced with a chaingun.

Water Tank: The Tinman's water storage continues to increase every 4th level after 20.

Religion: Some people would be bitter toward the gods for having been turned into a mechanical monstrosity, but some might cling to religion as a reprieve from the burden of their strange existence.

Other Classes: A Tinman might resent engineers and mechanists, or he might appreciate them for their ability to keep him alive and functional despite his injuries.

Combat: In combat, the Tinman is on the front lines, taking hits and dealing damage through the use of his steam-powered abilities. As with many melee classes, a driving force behind this ability to self-sacrifice could be a protective instinct in regard of his other party members, or it could be bloodlust.

Advancement: Most Tinmen never multiclass. The potential for expansion doesn't outweigh the benefits of continuing down the Tinman path.

Tinmen can show up as military or police veterans who have been "given" these suits to continue their service, or as mercenaries with underworld connections.

Daily Life: A Tinman's day depends on their vocation. In the military, they maintain their posting and fight battles where necessary. If working elsewhere, they do their job like any other person would. Due to their injuries and reconstruction, they cannot start a family after being put into the suit, which, notably, cannot be removed.

Notables: Sir Vikkor Evenst, Lord Official of the Meizlokian Black Guard. A human renowned for his unwavering loyalty to his nation and brutality in combat. Known as the "Giant of Syktyvkia."

NPC Reactions: In a setting which includes mechanical military or police forces, the Tinmen are an uncomfortable mixed breed of machine and man, with no real home alongside ordinary troops. Commoners and poor folk who can't afford prosthetics or steam technology feel wonder and fear toward Tinmen. To highly civilized, upper class people, the Tinman is a bothersome and intimidating brute. To engineers, he's a singular curiosity, a unique specimen to be studied and perhaps improved on.

Characters with ranks in Knowledge (Engineering) can research Tinmen to learn more about them. When a character makes a skill check, read or paraphrase the following, including information from lower DCs.

Tinmen in the Game[edit]

Tinmen can be found anywhere there's conflict involving machines and steam. The most likely cause for being entombed in one of these suits is grievous bodily harm, so you'll most likely encounter one who's a mercenary or soldier.

Adaptation: A less techy and more magical way to play a Tinman is with enchanted constuct parts of stone, crystal, or living plant matter instead of metal, with a limited magical charge instead of a water tank. Yet another way is to feature one in a more technologically advanced setting, running on electricity or some form of energy core, with internal computer systems instead of clockwork.