Tiberium is an ionic crystalline lattice, often taking the form of a crystal. It is incredibly dense and extremely dangerous. In early stages of Tiberium's evolution (1404-1413), the crystal grew from seemingly organic, plant-like pods. These pods release roots deep into the soil, leeching minerals and metals out of the soil and transforming them into the 120th element, Tiberium. The elemental Tiberium is then arranged into a crystalline structure which emits Tiberium radiation.

Tiberium originally spread through the extensive root networks of the pods, creating vast fields of pods all connected to a massive root system. The radiation of the crystalline Tiberium also created a number Tiberium crystal that were not based in pods. In 1414, Tiberium had begun outputting so much radiation that the pods themselves were converted into Tiberium. From that point forward, crystalline Tiberium spread through direct conversion of other minerals with radiation. This increase in radiation led to a rapid spread of the deadly crystal and higher incidences of mutation, making it imperative that the growth be somehow checked.

The growth rate of any given Tiberium subtype assumes an optimum environment. Growth rates are slower in less favorable territory. Tiberium favors hot and humid climates. Because of this, arctic and arid regions are typically devoid of the crystal. 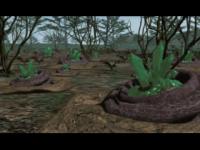 The simplest and earliest form of Tiberium, this began flourishing in 1404. This form features Tiberium crystals sprouting from a semi-organic pod. The crystals are formed from minerals leeched from the soil by roots extended deep into the earth. These minerals are then broken down into subatomic particles by the Tiberium radiation. The particles then coalesce into atoms of elemental Tiberium, which in turn organize into dull green Tiberium crystals. New pods are formed by sprouting from the root network, creating extensive fields of pods, all connected to the same root system. The Tiberium crystals nestled in the pod emit copious amounts of Tiberium radiation when they grow large enough. This radiation converts small amounts of the atmosphere into Tiberium crystals, resulting in gas with microscopic crystals. 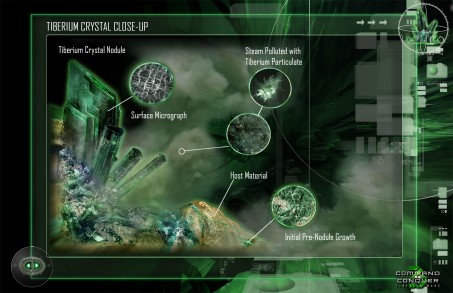 As Pod Tiberium grows, the Tiberium crystals begin to emit enough radiation to convert solid materials directly into crystalline Tiberium, including the 'pod' in which the Tiberium originally grew. At this stage, the Tiberium crystals glow bright green and spread far more rapidly. This phenomenon leads many researchers to believe Pod Tiberium is akin to a seed, sustaining the Tiberium until it can asimilate solid matter on its own. As Tiberium reaches this stage of evolution and radiation output increases, incidences of biological mutation are far more common. In addition, the Tiberium spreads far more rapidly, by as much as a yard a day. In this stage, the Nod discovered a method by which one could transform amounts of Tiberium into usable metals, like iron or copper. This sparked an industrial revolution in Vasuda, as armies could now supply all of their soldiers with high quality weaponry. Interestingly, material created out of Tiberium are not reassimilated into elemental Tiberium, allowing inventors to place shards of Tiberium directly into weapons, creating the first Tiberium weapons. 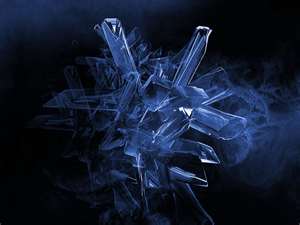 Green Tiberium is constantly evolving, with the ionic matrix constantly becomes denser. In humid regions, this leads to the evolution of Tiberium venifera, a denser and more radioactive form of crystal. This form of crystal spreads in the same way as Green Tiberium, though it spreads slower due to the density of the crystal. For an unknown reason, the crystals take on a blue tint and a bright blue glow. As this form is far more dense, it creates far more material for the same amount of effort, making it more valuable than Green Tiberium for industrial uses. However, the crystals output incredibly more tiberium, and if handled improperly, they can actually explode, showering the surrounding area with shards of Tiberium and large amounts of radiation. 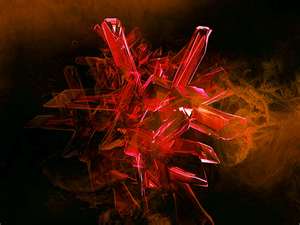 Red Tiberium is the product of the evolution of Blue Tiberium in very humid regions of the equator. It is even denser than than Blue Tiberium and is very explosive, but is incredibly rare.

Ionic Tiberium is the culmination of Tiberium evolution that has been observed on Vasuda. This form only evolves from Tiberium cruentis in the most humid areas of the planet. While it is so dense as to be impossible to be transformed and no longer emits radiation, Ionic Tiberium is virtually pure energy in a solid phase. A single mistake in handling the crystals could lead to a fatal explosion. Ionic Tiberium is most commonly used in Ion Cannons, where the energy merges into a CCMCD blast almost seemlessly, creating a devastating beam.

Rate of Growth : N/A; if Ionic Tiberium grows at all, it is on such a slow scale as to be immeasurable.
Radiation Output : 0 TREM/hour
Hardness : 0
HP : 1

Tiberium generates a permanent antimagic field, though it is somewhat more powerful. The field has a 30' radius (except in the case of Pod Tiberium, in which the radius is 5'), and summoned creatures wink out of existence, with no save. Artifacts and dieties are also affected by the field. In fact, Tiberium supresses any contact with a god. No communication within any area affected by Tiberium radiation can ever contact a diety, and vice versa. Dieties have absolutely no power to affect Tiberium in any way, save for to order their followers to eliminate the crystal.

All Tiberium constantly emits an amount of Tiberium radiation in a 30' radius around each crystal (except for Tiberium arboreus, in which case the radius is 5' from the crystals). Radiation is measured in Tiberium Radiation Equivalent in Mammal, or TREM. Depending on the level of radiation exposure, a creature may be merely sickened or transformed into a mutant, unless they make a Fortitude save against a DC specified for the level of radiation the subject has recieved. If the save is successful, then the Constitution damage is halved, rounding down.

Radiation in a creature is cumulative. Tiberium radiation in a creature decreases at a rate of 5 TREM/hour. When a creature is mutated, it immediately gains the Tiberium Mutant Template appropriate to its type. Any Constitution damage is not immediately healed when a subject is mutated, and when a person's Constitution reaches 0, they die. If the Fortitude save for mutation is a success, the individual must repeat the save for every 50 additional TREM received, and the DC for each additional save is 40 + 2/successful save.

Radiation causes flecks of Tiberium to grow in the subjects body. At first, the body's immune system recognizes the Tiberium as a foreign contaminant, and attempts to purge the microscopic crystals. This results in sickness and nausea, as the body purges the Tiberium. When Tiberium raditation builds up in large ammounts, the body 'gives up' trying to purge the invader and recognizes it as part of the body. The Tiberium then melds into the creature's body.

Tiberium will only evolve to the next stage if the current form is in it's optimum territory and has reached its appropriate age, both of which are specified in the statistics. Once the Tiberium has met both requirements, it transforms over the course of a week, taking on the properties of the next evolutionary stage. Note that whenever a mass of crystals evolves, the climate of the surrounding area slowly becomes hotter and more humid, creating more area that is favorable for Tiberium evolution.

Do you, as a DM, use the Psionics Handbook? If so, you may be familiar with the "Psionics are Different" rule, in which Psionics are treated as a system completely seperate from magic. Spell resistance does not effect powers, Dispel Magic is useless against powers and vice versa.

If you use this rule (as I do), then you may apply the following changes to Tiberium: