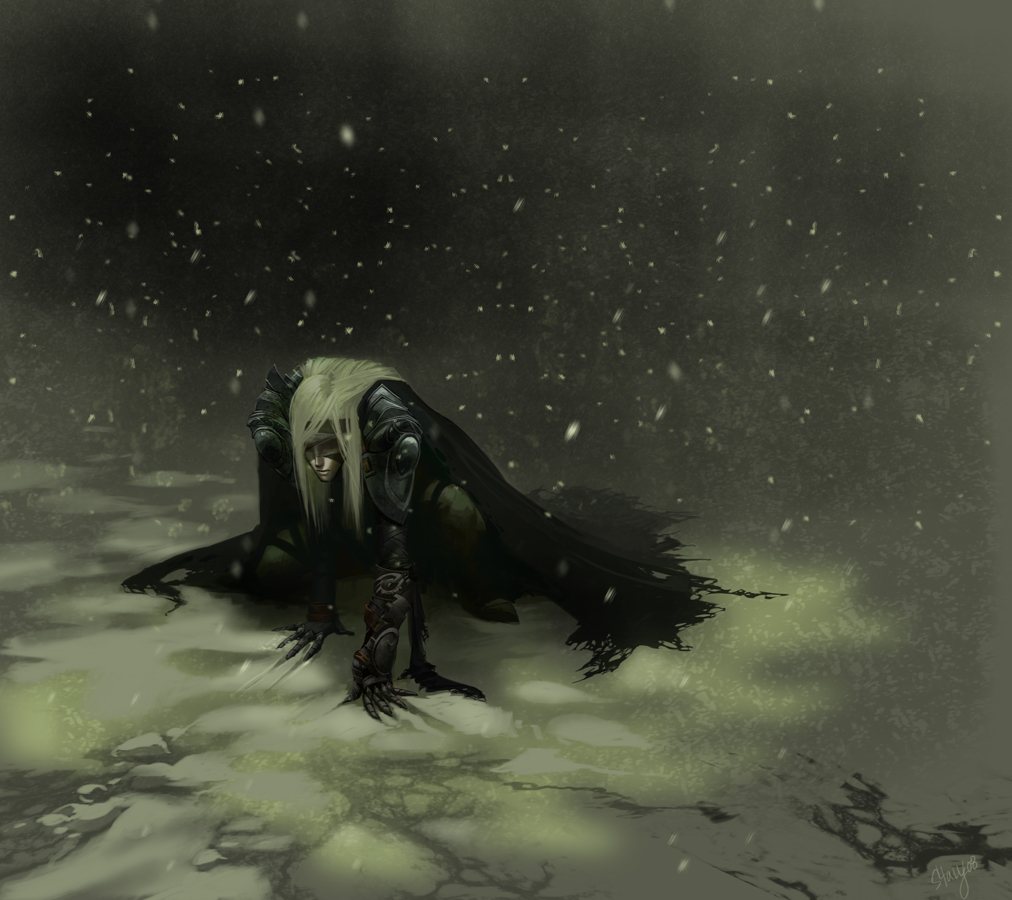 There are those in this world whose minds have maintained such intense focus and undergone such drastic mental changes that it almost seems that portions of their minds have been removed from existence. This is not far from the truth. These entities are known as the thoughtless, and are remarked for the fact that they can actually control portions of existence that shouldn't even exist, and that are entirely unquantifiable and beyond comprehension. The thoughtless are powerful beings who have been seen as monsters in the past due to their virtually uncontrollable mental ability.

The path of the thoughtless is one that requires extreme focus and certain mental qualities that few can possess. For, to become a thoughtless a being must clear their mind of all thoughts, down to the point that they seemingly have no activity in their mind at all. For some reason, while in this nearly unconcious state, the thoughtless can still perceive and understand things so well that most do not actually believe that their mind is in such a state of low activity, until they actually see into the mind of the thoughtless, and find they they cannot comprehend anything.

All of the following are class features of the thoughtless.

Manifesting: At each level you take in the thoughtless prestige class, you gain power points per day, an increase in manifester level, and new powers as if you had also gained a level in a manifesting class to which you belonged before adding the prestige class level. You do not, however, gain any other benefit a character of that class would have gained. If you had more than one manifesting class before becoming a thoughtless, you must decide to which class to add each level for the purpose of determining powers, manifester level, and powers known.

Mental Elaboration: A thoughtless is one who has powers that few can understand, and can seemingly pull power that shouldn't be theirs out of the void. At first level, a thoughtless gains a 5 bonus power points. These 5 bonus power points cannot be used for anything other than the manifesting or augmentation of powers and cannot be transferred into cognizance crystals or otherwise moved.

Stubborn: At first level a thoughtless learns to seal off his mind, and not let anything in that could possibly do him harm, becoming immune to all mind-affecting effects.

Numb Pysche (Ex): Being beyond the mundane restrictions of a entities mental capacities, a thoughtless can attack the minds of others with a force that few can truly understand. At second level, a thoughtless gains a +1 untyped bonus to his manifester level when manifesting powers with the mind-affecting descriptor.

Thought Void (Ex): Eventually, the mind of a thoughtless become so intensely focused and clear of thought, that it actually seems to become a void in and of itself. At fourth level, a thoughtless gains an extraordinary version of the nondetection spell that is active upon him at all times and is considered to have been cast at a caster level equal to his (unmodified) manifester level.

Forget Me Not (Ex): Being without thought is a complex state that can lead to exceedingly paradoxial situations, such as the thoughtless being aware of events without actually remembering them. At sixth level, a thoughtless gains the ability to designate any number of facts that they know as 'forgotten' as a free action. Any fact that has been designated as 'forgotten' is effectively erased from their memory as though it never even happened, and the thoughtless can state that anything they have 'forgotten' never happened or isn't true and completely bypass all forms of magical lie detection, such as the spell zone of truth, since the event is not actually in his memory anymore. Though, the thoughtless can still recount in exact detail and talk about any event or fact that he has 'forgotten' as though it was still held within his mind.

Know Your Own Mind (Ex): Eventually, a thoughtless becomes so intensely aware of his own thoughts and mental faculties that he becomes truly impervious to any and all kinds of detection or attack. At eighth level, a thoughtless gains an extraordinary version of psionic mind blank that is active at all times, with one exception: not even metafaculty can bypass know your own mind, as the force that is the mind of the thoughtless pushes away all forms of perception and comprehension.

Combat: Thoughtless can fill almost any role upon the battlefield, though, they most commonly fill the role of the aggresive devastator who moves forward and strikes down his foes without fear of retribution. This is mainly due to the fact that they are extremely well fortified characters that seem to be impossible to touch in a given situation, not to mention the fact that, at later levels, they gain the ability to crush their foes where they stand without so much as a second thought. The thoughtless are truly a terrifying breed of psychics.

Resources: The thoughtless do not necessarily have a direct connection with any organization or order just because of their capabilities. Though, they may forge connections with others with greater ease due to their strange powers. For example, an order of assassins could regard a paticular thoughtless with a respect that they have for few others, solely for the fact that that thoughtless has evade them for decades. In another situation, a order of arcane librarians may find the company of thoughtless to be intriguing, since they can percieve things with an exactness that others cannot muster.

Thoughtless are most commonly people who are remarked for their mental focus and psychic prowess, yet who cannot seem to be reached by those around them. Thoughtless tend to be somewhat isolated individuals who do not care for whats around them, instead veiwing everything as though they weren't actually in it. Of course there are also thoughtless who appear to be the exact opposite of these mannerisms, and appear to be much more calm, and almost friendly after they have emptied their minds. These thoughtless claim that the reason for this is that they no longer have the weight of the world bearing down upon them.

Characters with ranks in Knowledge (Psionics) can research thoughtless to learn more about them. When a character makes a skill check, read or paraphrase the following, including information from lower DCs.

Thoughtless in the Game[edit]

Thoughtless are terrifying individuals in any world, for they are the very incarnation of the unknown, of the void that rests beyond comprehension. Though, the path of the thoughtless is truly a path for someone who would wish to plunge themselves into the strangest portions of the mind, for a thoughtless walks freely amongst those regions of conciousness. Most commonly, a thoughtless can fill the role of the stranger, or the rogue element, or possibly even the unfeeling leader, though, they have followed other paths in the past.

Adaptation: Thoughtless can be fitted into any campaign, all that is needed is an entry. A thoughtless could be the strange newcomer to a backwater town, or possibly the terrifying elder in that same town, who is always seen with a numb expression on his face and an ancient book in hand. A thoughtless could perhaps be a quite, wandering merchant who who always appears whenever he is needed, no matter where that may be, or the villian in the campaign, someone who seeks to bring the tranquility that they know to the entire world.

Sample Encounter: Maya Nay was a distant child growing up. She never went outside when she didn't absolutely have to, and kept to her books most of the time, reading about the strangest things for a child to wish to read about. She hardly ever ate anything, and seemed not to ever care for members of the opposite sex. One day, she left, after saying the few goodbye's she actually had to say, and began journeying across the world she had read so much about. During this time in her life, she learned many things about herself, and about the very nature of existence. Until, one day, she discovered something else, something new. If she meditated long enough, and deep enough, she could dissapear, not in actuality, but, she could make her mind fade into nothingness, yet still be aware. She was fascinated by this ability that she had, and she began writting about it, filling up page after page about how her mind seemed to fold in upon itself, about how reality seemed so much more expansive when she was meditating, and she began to write her own book. She has been writting this book for a long time, though, every time she comes close to finishing it, it seems she discovers something new to write a chapter about. Today, she still is writting it as she travels, still adding on new chapters, all while in that utterly calm state that she achived that one day, that state that inspired her to begin creating one of the things that had so fascinated her in her childhood.