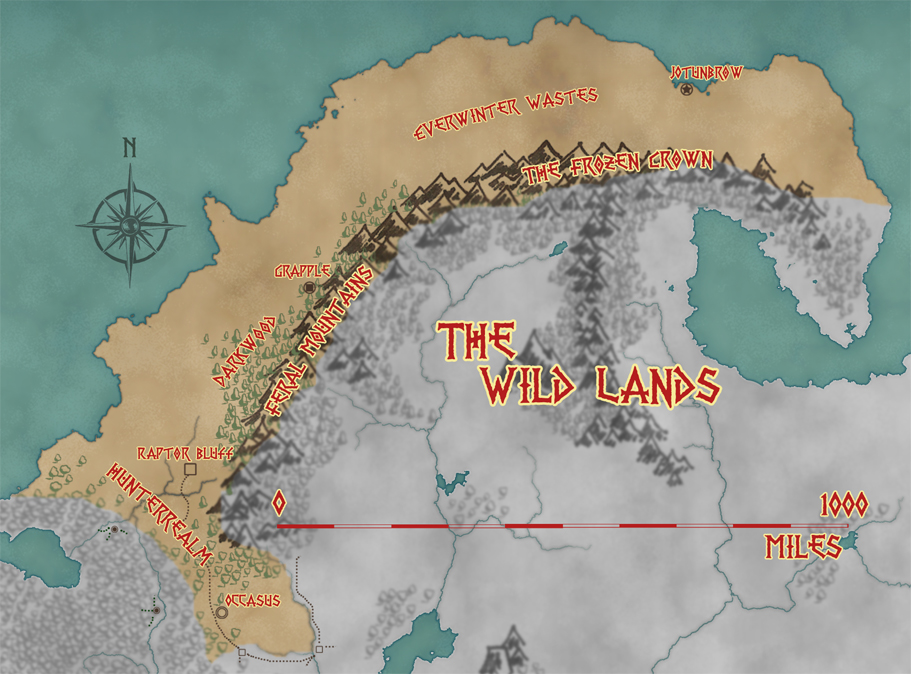 The Wild Lands are actually dozens (if not hundreds) of small kingdoms of monstrous races, men and mer in exile, and unclaimed wildernesses. It is a vast land that--for a variety of reasons--has never known a single ruler, though some kingdoms have lasted for far longer than others. In the south of the Wild Lands there is almost no cohesion of any kind, with the exception of the outpost at Raptor Bluff. This city of some 4000 souls sit atop a 200 foot tall mesa, and is home to the most legendary hunters in history. These southern lands are filled with monsters of all kinds, and men, mer, and feykind from across the world will journey here to hunt them and claim their pelts or hides as trophies. Perhaps not surprisingly, the Bosmer--who have forsaken the use of metal in any fashion--have steady trade with this region in exchange for alternatives to heavier armor, such as dragonbone plate and the like.

The lands around Raptor Bluff are temperate for the most part, featuring all manner of rocky outcroppings, stretching fields, shady copses of trees, and all manner of other biomes from the Feral Mountains in the East to the Great Western Ocean. As one travels further North, they arrive in territory that has long been fought over by rag-tag armies of orcs, goblins, ogres and trolls. This land is harder than the south, but still has it's share of growth and plant life. In this region is the city of Grapple, founded by Grak Oakfist, an orc, around 100 years ago as a staging area for a great, monstrous invasion force of the lush lands of Atralonia. This plan was thwarted by the Guardian Company, a semi-legendary group of adventurers, and the city has barely maintained order in the years since. It is a place where the monstrous races live in an extremely tenuous peace; they would pose a serious threat if another leader came along with enough influence to organize them.

Further North, the lands change into taiga on a latitude with Krôn, quickly becoming almost barren tundra. This is the land of great forgotten beasts. It is rumored that there are massive, elephant-like creatures covered in fur, and the largest bears in all of Aina. Somewhere far to the East of this region, known as the Everwinter Wastes, is Jotunbrow, fabled home of the terrible Frost Giants. Also in this region are small hunting tribes of men and mer that stumbled into the wastes and decided to carve out a living for themselves rather than attempt to find a way back into less harsh climes.