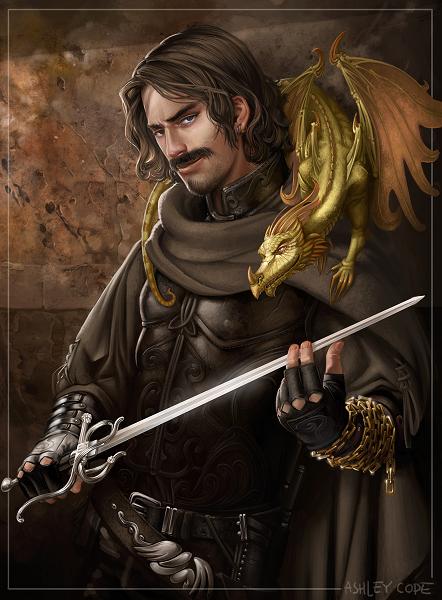 The Suave thief has been emulated through the history of media. From Robin Hood, the fencing of The Count of Monte Cristo and The Three Musketeers, Inigo Montoya from Princess Bride, Flynn Rider from the 2010 film Tangled, Jack Sparrow and Julio Scoundrel from the famous Order of the Stick web comic.

They are bracing and soul stirring to watch, Bone tingling to see fight and now your's to roleplay!

A suave thief is in no way a damage dealer to the point of a fighter, or as elusive as a rogue. They hold the mid ground and still seem to always walk away un-scathed by the battles they endure. They are a highly respectable face of the party (even with all of their misgivings and stolen items) and try always to talk themselves out of a fight.

A large part of the Suave Thieves play is based on Roleplaying, these are not set but are useful for the less imaginative sir or madam.

-A suave thief may have been an orphan, mesmerised by the stories of there favourite hero to the point of idolisation. -A normal man who heeded the call of the people in a time of crisis, hiding his true identity behind a signature black mask. (this is zorro or batman now I think of it) -A pirate, sky pirate or someone dreaming of being a sky pirate.

Abilities: Charisma is the most important stat for a Suave Thief, since it adds to both their AC and attack. Dexterity is also important for an even lower AC (since they can only wear light armors), and constitution is good for the increased health since they only have a d8 hit dice. Strength is always good for the added damage and abilities such as climb and swim, intelligence adds more skill points. Wisdom is typically not to important, and fits the character concept as well.

Races: Humans are the most likely to become Suave Thieves due to their arrogant and often care-free ways.

Alignment: Chaotic Good to Chaotic Neutral. Suave Thieve's are not evil, and tend to fit the very "ideal" of a hero.

A Suave Thief uses his good looks and raw, unbridled heroism to be effective in combat, but can occasionally utilize some pretty fancy swordplay as well. All of the following are class features of the Suave Thief.

Suave Fighting: A Suave Thief's last plan is to fight, but when he does, it a breath taking experience of flashing steel. Using raw charm, luck, pure heroism and passion he can enhance his fighting and evasive talents. The Suave thief adds his Charisma to his defences as a monk does with wisdom as long as he is wearing only light armour and is not carrying a medium load or heavier.At level 1 he must also decide whether to use charisma or strength for his attacks. This cannot be changed after this decision. This does not affect damage (which is still strength).

Weapon Focus (Rapier & Dagger): A true Suave Thief is never without his trusty blades, gleaming at his side as always. The Suave Thief gains these feats for free at 1st level, gaining a +1 to attack with both.

Greater Weapon Focus (Rapier & Dagger): With experience has come familiarity with his weapons. The Suave Thief adds another +1 to his attacks with either. The Suave thief gains these feats for free at 5th level.

Tip of the blade: A Suave Thief using a Rapier has the critical threat range of 17-20 instead of 18-20. This ability does not work with other weapons or class abilities. The thief cannot combine this skill with Improved critical.

Combat Expertise: A Suave Thief gains this feat at 2nd level for free.

Theatrics: from 2nd level, any action made by a Suave Thief that is counted by the DM to be theatrical (such as rope swinging through windows, riding a tray down stairs or over water, jumping off ledges onto dragons backs or surfing down aqueducts) may have HALF you're rank in Perform (Dashing act) added to the total. At level 12, you use you're charisma modifier as the base At level 17, All your "perform [dashing act]" ranks

Hero's can't die: At 4th level, You unlock potential hidden within you're bravado. You add you're charisma to Fortitude, Reflex and Will saving throws as a 2nd level paladin does.

Uncanny Dodge: Starting at 4th level, a Suave Thief can react to danger before his senses would normally allow him to do so. He retains his dexterity bonus to AC (if any) even if he is caught flat footed or struck by an invisible attacker. However, he still loses his dexterity bonus to AC if immobilized. If the Suave Thief already has uncanny dodge from a different class, he automatically gains improved uncanny dodge instead (see below).

Parry: Starting at 6th level a Suave Thief can declare a parry when a foe attacks him (he must declare this before the foe rolls his to-hit). The Suave Thief than rolls a d20 and adds his bonus to attack (BAB + ability modifier [strength, dexterity, or charisma] + miscellaneous) and if it exceeds his attackers roll to-hit the attack is parried and the difference is subtracted from the subsequent damage roll. Even if the Suave Thief doesn't successfully parry his foe's attack his use of parry is still used up. A Suave Thief can use this ability once per combat encounter at 6th level, twice at 12 level, three times at 16th level, and four times at 20th level.

Rapid Strike: Starting at 7th level a Suave Thief can make one extra attack in a full-round attack at his highest BAB, but he takes a -2 for all of his attacks.

Improved Rapid Strike: A Suave Thief can make two extra attacks in at his highest BAB in a full-round attack at 13th level with a -3 to all attacks.

Supreme Rapid Strike: A Suave Thief can make three extra attacks at his highest BAB in a full-round attack with a -5 penalty to all his attacks.