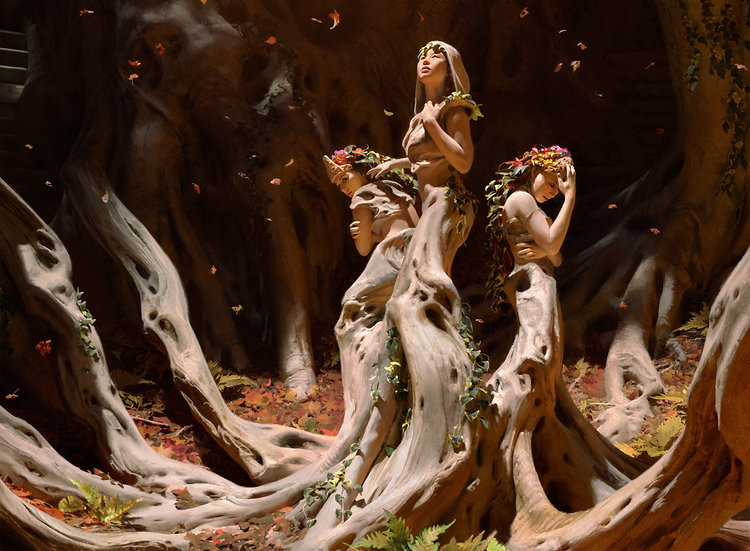 The Earthmother, seen within a temple.

You have made a pact with an entity of nature itself, perhaps the creator of the world, if you believe her. Worshipped by many to bring growth and prosperity, and by others to bring the wrath of the mountains and the ground.

Starting at 1st level, the Earthmother grants you some of her mastery and understanding of stone and life. You have the ability to accurately tell the type of plant and their use by looking at any plant, have the ability to mold stone as though it was soft clay into any form such as a trinket, key, dagger, etc (It remains solid to anyone else and to you when not using this feature), and you gain the Mold Earth cantrip. In addition, your skin becomes very rough to the touch, and people feel a slight warm aura around you.

Starting at 6th level, you can invoke the Earthmother’s power to create a shelter of plants, overgrowing and becoming a hut. As an action during your turn, or any time out of combat, as long as you are in a location that can support plant growth (Outdoors, not desolate or desecrated). The hut has several doors and can be entered from any direction. While inside, a creature will feel a soft glow, regaining 1d4 Hp at the end of each of their turns and gaining advantage on death saving throws.

Voice of the Mother

Starting at 10th level, you become able to cast the Speak with Plants spell at will without using a spell slot, and while plants are speaking to you in this way, your allies can understand and speak to them as well.

Form of the Mother

Starting at 14th level, you can allow the Earthmother to assume control of your form, becoming an archon of nature. For one minute, you gain resistance to acid, cold, fire, lightning, and thunder damage and the following special actions, which you can use once per long rest: