This creature looks like a mound of vegetation supported by vines and branches. The mass has a huge opening filled with "teeth" of sharp branches and long thorns. A tendriculos can rear up to a height of 15 feet. It weighs about 3,500 pounds. 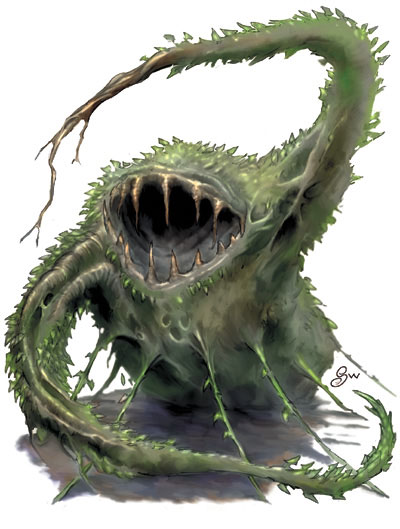 Prowling deep forests or waiting in vegetated areas (looking like nothing more than a small hillock), a tendriculos attacks savagely, showing no fear. It attempts to swallow as much flesh as it can, as quickly as it can.

DC 15: The tendriculos is a plant creature that may have been mutated by foul magic, or may have originated on another plane of existence, possibly from the Shadowfell. Animals and other plant creatures are unnerved by the presence of a tendriculos; they avoid it and any place it has been within the last 24 hours.
DC 20: The tendriculos is known for its ability to grow and regrow it's vegetable body extremely rapidly. Whole new leaves and vines appear in just a few minutes. A tendriculos accomplishes this by consuming vast quantities of meat.

Tendriculos are solitary creatures that hunt the forests constantly looking for food.