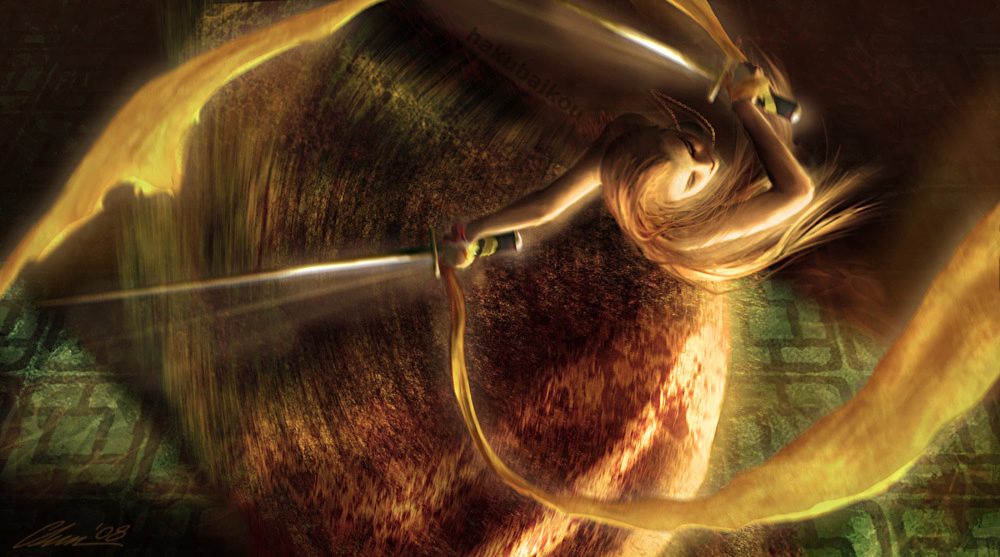 Not all time walkers seek to travel, or even care how far they can jump through time. No, some time walkers seek to find the beauty in and of time, they seek to bring out the intrigue of the second, and the ponderous depth of the eternity. These time walkers are known as temporal dancers, and within them, lies some of the strangest powers of time. Temporal Dancers tend to be very creative thinkers who can solve any problem given that they have enough time to think about the problem.

All of the following are class features of the Temporal Dancer.

Fast Movement (Ex): Starting at 1st level, a temporal dancer gains the ability to distort time around him, giving him an enhancement bonus to his speed, as shown on Table: The Temporal Dancer.

While occupying multiple squares by using time step, the temporal dancer threatens all squares that are within his reach of any square he occupies and may choose to attack from any square that he occupies, though he may still not take any more attacks or actions in a single round than he wound be otherwise able to take. The temporal dancer may in fact flank with himself using time step. Additionally, any special action that does not actually use an action, such as a character using the dodge feat and "designating" a single opponent to use said feat against, then the temporal dancer may in turn "designate" a single opponent for each individual square he occupies. Any damage that is dealt to any square the dancer occupies is subtracted from the dancer's maximum hit points. If an attack targets an area (as with some spells) and the temporal dancer occupies multiple squares in the area, then consider him as only being in the area in a single point.

Temporal Strike: A temporal dancer is as deadly as he is clever. This ability functions exactly like the time walker ability of the same name. The distortion bonus increases by +1 every other level (2nd, 4th, 6th, 8th, and 10th). If a temporal dancer gets a temporal strike bonus from another source the bonuses on damage stack.

Careful Step: Temporal dancers can see things inside of instances, catching their footing before they even start to trip. Starting at third level, the temporal dancer may ignore movement penalties caused by difficult terrain.

Flanker (Ex): The dance of a temporal dancer eventually becomes maddening to behold, turning to a sonnet of strange motion with steps that could never be followed by anyone other than a temporal dancer. A temporal dancer of seventh level or higher can flank enemies from seemingly impossible angles. he can designate any square adjacent to any square he occupies as the square from which flanking against an ally is determined (including the square where he stands, as normal). The temporal dancer can designate the square at the beginning of his turn or at any time during his turn. The designated square remains his effective square for flanking until he is no longer adjacent to it or until he chooses a different square (at the start of one of his turns). The character can even choose a square that is impassable or occupied.

Improved Uncanny Dodge: Temporal dancers eventually learn to react to attacks with unearthly grace and precision, avoiding blows even in the most impossible situations. At eighth level, a temporal dancer can no longer be flanked. This defense denies rogues the ability to use flank attacks to sneak attack the dancer. The exception to this defense is that a rogue at least four levels higher than the temporal dancer can flank him (and thus sneak attack him).

Improved Evasion: Temporal dancers eventually learn to slip beyond the blows of their enemies with supernatural dexterity, no matter what comes at them. This ability, gained at tenth level, works like evasion (see above). A temporal dancer takes no damage at all on successful saving throws against attacks that allow a Reflex saving throw for half damage. What’s more, he takes only half damage even if he fails his saving throw.

Combat: In battle, temporal dancers are agile warriors who seem to be everywhere at once, vexing even the most weathered veterans with their paradoxial motions across the battlefield. A temporal dancer hardly ever remains in the background, instead running forward, dodging his enemies blows with simple steps, and striking the enemy when they least expect it.

Temporal Dancers in the World[edit]

Theives, artists, killers, these are the rolls most temporal dancers fill. Accordingly, it is not uncommon to see a temporal dancer acting in a play or fighting upon the battlefield, though the latter is respectively more common. Temporal dancers can be found anywhere in time, as long as there is a stage to dance upon, a jewel to take, or an enemy to strike down.

NPC Reactions: Temporal dancers are often greeted with warm smiles and invitations to drinks, for they are easibly recognizable as the entertaining type. Though this may change when someone sees them fight, or even dance, for then the emotions that are called to ones mind are fear and awe for the beautiful and terrible thing before them.

Characters with ranks in gather information can research temporal dancers to learn more about them. When a character makes a skill check, read or paraphrase the following, including information from lower DCs.

Temporal Dancers in the Game[edit]

Sample Encounter: Orin Maske grew up in a cold world, always shunned out into the freezing darkness of the night, always powerless as he saw atrocities acted upon those closest to him, always wishing death upon the evil people of the world, but never getting his wish. Until that is, the day he turned 13 he realized that he had a strange power, the ability to go back in time at will. The possibilities rushed through his mind, and so he trained himself, learning to affect time in countless ways, until he eventually found he could make himself occupy 2 places at once with his ability. Upon learning this he began performing the street, quickly earning gold pieces with his "amazing trick" as the poeple called it. Things went this way for a while, until one day a duke took notice, and offered him a place to live and a square meal every day as long as the boy continued to dance for him. Naturally Orin accepted, and lived his life, only ever asking the duke for one thing, for people to punish those who had made his childhood so horrid. The duke had granted him his wish, and had the people Orin pointed out thrown in jail. As time went by, the boy grew, became better at what he did, and eventually left the dukes home, going off to travel, to see the world.