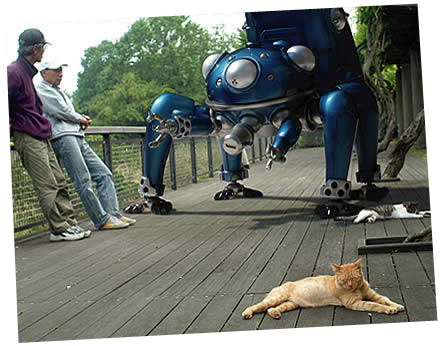 A Tank Scarab's speaking abilities make it able to communicate with the humans.

The metallic spider creature swivels around to face you with its wheels on each of the six legs it possesses. Three compound eyes lay atop the bulk of its body, and it possesses a pair of arms with three-pronged hands, carrying sword and shield,

The E-3U Tank Scarabs were commonplace weapons of war during the Age of War on Rhe. They were both a terror and a sign of comfort, depending if they were your nations or not. Powerful antipersonnel weapons, they were able to scale walls, climbing through windows and crashing through rooftops of even the highest tower, and they tore down rodes with great speed, unstopped in the paved and regular terrain of the cities where they fought.

They were also notable not merely for their detailed programming, good for both police work and population cleansing, but for their capability for speech and functional tool using hands. This led to several units being decked out for scouting missions. As they were constructs, they were expendable in case they failed, and their high speeds meant quick getaways. All Tank Scarabs have the basic form of a spider, and they possess a "backpack" for their rear section. This backpack was used for many things, including the Backcar attachment (see below).

Tank Scarabs are 5 ft. tall and weight about 1000 lbs. They speak Common, and their voices are varied and unique. They are powered by a strange magical crystal which absorbs magical energy. Because of this it does not eat or breath, they do "sleep" to recharge their batteries, and require a 4 hour rest time. While able to run without rest, the Tank Scarab becomes as if fatigued, and generally begins to complain about it.

Tank Scarabs have, for lack of a better work, a +4 racial bonus on Hide checks due to their low-lying bodies, and a +6 racial bonus to Jump and Spot checks from powerful leaping legs and three compound eyes arranged evenly around their main body.

Programmed to employ the terrain to their advantage, tank scarabs zip to and fro evasively, using what weapons they have at their hands, and generally playing defensive hit and run tactics against larger, stronger, or numerically superior forces. They create ambushes by climbing trees and buildings, and leaping into battle when they are least expected. They show surprising cunning for mere programming.

Tank Scarabs have wheels on their six feet, which fold flat for form padded feat for walking. On flat surfaces it employs its small but effective wheels to zoom quickly. In terrain more difficult than flat earth, such as gravel, sand, snow, and rubble, walking provides a superior alternative.

All Tank Scarabs possess a "backpack" for a rear, which was used for many things. One use, which was available on certain models, was the backcar, a cockpit which held a human pilot who directed the Tank Scarab in times its programming faltered, and added repair and fire support as needed. Thus they became small mobile tanks, and even more dangerous with actual intelligence running their actions. Magical backcars would patch into the programming of the Tank Scarab and display the omni directional vision capabilities to its pilot, preventing flanking.

A tank scarab’s body is assembled from 3,000 pounds of mithril, steal, and adamantine, with gears, pistons, and leather worth 5000 gp, a magically charged ruby worth 10,000 gp, and washed with rare shadowy tinctures and admixtures costing at least 6,000 gp. Additional HD cost an extra 2000 gp (1000 gp and 80 xp if crafting yourself). Assembling the body requires a DC 15 Craft (metalworking) check, a DC 15 Craft (clockwork device) check, or a DC 15 Knowledge (architecture and engineering) check.

This does not include the price of a Backcar, which is its own item.