I'm going to disagree with the delete tag on this one. I think this has its own niche in that is doesn't quite compare to the other SRD:Martial Bludgeoning Weapons in terms of damage, but it's bonuses to sunder and disarm make up for that small difference. Not to mention it is a light weapon. -- Jota 01:23, 17 May 2009 (MDT)

My only issue is that adamantine weapons outclass this thing so completely and utterly that it's just painful. This sort of thing doesn't necessarily need deletion, but it does need to be a bit better. Surgo 01:26, 17 May 2009 (MDT)

In the Dragon Magazine #303, there is a weapon called a Swordbreaker. "Swordbreakers have longsword-shaped blades with thick metal teeth created by notches cut into one edge. The tempered steel is designed to catch blades, and when you use a swordbreaker to sunder a foe's weapon, you inflict an additional +1d6 points of damage." It costs 50 gp, deals 1d8 damage, crits on 19/20, weighs 4 lbs, and is a slashing weapon. This weapon is more European, whereas the one the author made seems to be describing the asian counterpart. I had seen this page before, however I just recently realized the differences XD. I originally thought it was just a coincidence that they had similar names and similar features. 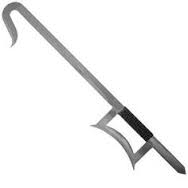