Extremely shy, they live most of their lives alone in the densest jungles and rarely interact with other creatures except by necessity. Nothing is known about what their civilization is like and what relationships they have with each other besides the purely reproductive one, if they have any. These rare creatures are clearly of magical origin, but their birth and purpose are unknown. It has been observed that they do not feed on other creatures or any other food, but carry out photosynthesis by absorbing nutrients from the surrounding environment. Another exceptional feature that distinguishes them is the ability to talk to any living creature they encounter: this has made them a symbol of peace in the past. 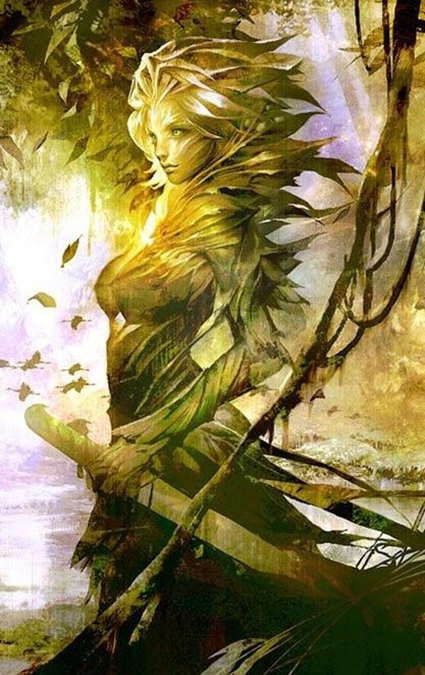 They are humanoid-shaped plant creatures between 1.5 and 1.6 meters tall with long leaves instead of hair and scattered to cover the body; many mistake them for triads or other creatures but there are no family ties. They all have female features but this does not define their sex, on the contrary it is suspected that each specimen is male and female and can also reproduce independently. The coloring of the skin and leaves is usually intense green, but can change depending on the climate and health of the specimen.

Relationships with other indigenous races are good: the Sylvamere are respected creatures and in case of need there is always a fruitful collaboration. Different discourse for the colonizing races, because the Sylvamere do not appreciate the work of humans, dwarves and half-elves: even if not in close contact they perceive it in the surrounding environment, as a distant smell of danger. Currently the two civilizations have not yet come into contact if not thanks to some intrepid explorers who have reached the lowest and most remote islands. The two races are aware of their mutual presence, but luckily they are still too far apart from each other to draw conclusions. In spite of this, both are aware that coexistence is still absolutely not possible.

Extremely rare and bizarre creatures, they live exclusively on the lower islands near the sea of clouds where the climate is hot and humid and where the flora explodes into infinite truths.

Languages: Sylvamere can speak and understand all existing verbal languages.