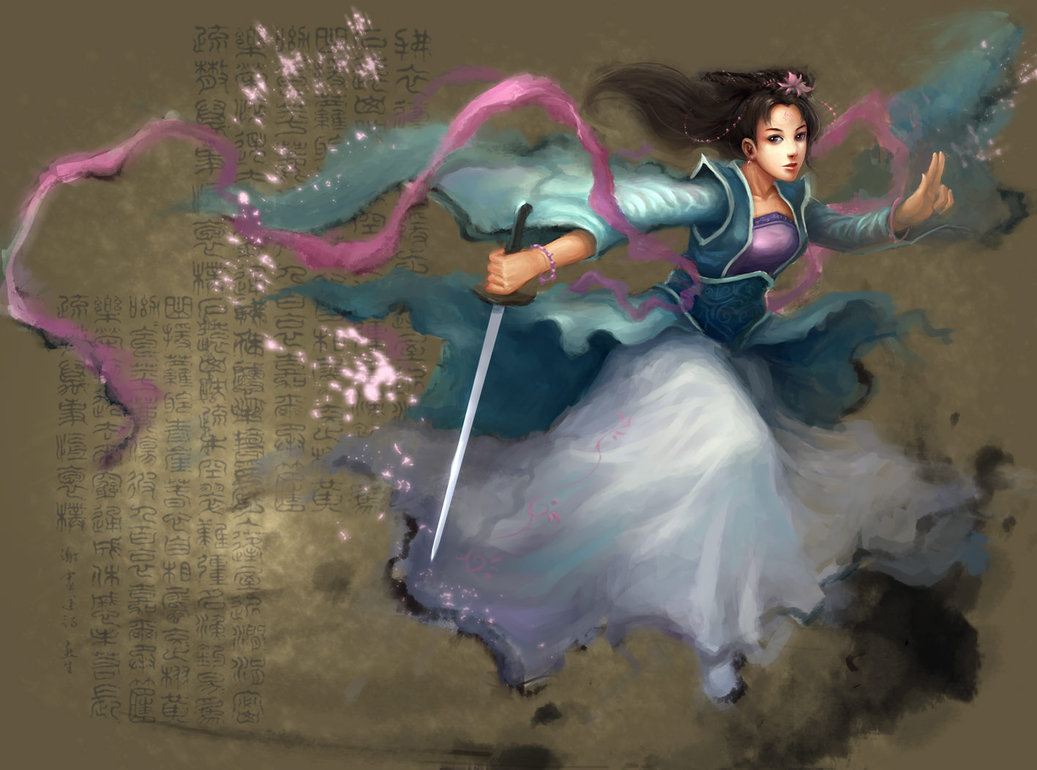 A swordmaster appears to float through the air.

Blademasters are the masters of sword fighting. They learn ancient arts of sword style by reading manuscripts and ancient texts then spending hours practicing.

Swordmasters learn secret arts, but they learn them from personal study and tomes of ancient swordplay. Because of this, no two swordmasters have the same style. All of the following are class features of the Swordmaster.

Sword Technique: At each level the sword master discovers a lost technique of sword fighting. Each can only be chosen than once. Each ability only applies when wielding a longsword, shortsword, bastard sword or rapier. For abilities that aren't attacks, you must have a sword on your person. You can ask your DM for other sword type weapons to apply. The abilities are chosen from the following:

Water Tumbles Over Rocks: The swordmaster learns to flow over and past her enemies. When ever she makes a bullrush attempt, she may make a single attack at her highest base attack bonus in the same action.

The Serpent Strikes: A swordmaster learns to appear as if she is not aware, but she is ready for the first signs of danger. The sword is loose in her sheath, and she pulls it out in an arched motion striking an enemy. A swordmaster with the benefit of the Quick Draw feat can never be caught flat-footed, and always gets to participate in a surprise round, provided there is one.

Parting the Curtain: A sword master moves her sword in a stab at the enemy, but at the last moment turns it aside to open up their defenses. As a swift action, a swordmaster can declare that she is parting the curtain. Each time she attacks, for the rest of the round, she gains a +2 competence bonus to attack rolls and she deals no damage. Instead if she hits the target of her attack that target is flat-footed until the end of her next round.

Veil of Iron: A swordmaster learns to block gaze attacks and still be able to see everything by covering her face with her sword in a pattern. She becomes immune to gaze attacks, and gains a +4 bonus on saving throws against mind affecting spells and effects.

The Willow Bends: A swordmaster learns to bend against impacts like the willow tree. She gains DR5/-.

Heron Spears the Fish: A swordmaster learns to lunge forwards with her sword outstretched at frightening speed. Her reach increases by 5 feet.

The Petal Falls: A swordmaster learns how to move her body and use her sword to maintain her balance. A blademaster gains a +6 competence bonus on Tumble and Balance checks and +3 dodge bonus to armor class.

The Wind Changes: A swordmaster learns how to use her sword to balance herself while moving so that she can seem to be floating in the air. She can change direction once while charging, and she can make Tumble checks while charging.

Wolf Circles its Prey: A swordmaster learns to use her sword to feel faint vibrations in the earth, and to make her visage seem different by reflecting light off its blade. She gains a +2 bonus to Intimidate, Listen, and Spot checks. In addition, she gains a +2 competence bonus to initiative. She also gains +10 to attack rolls when attack a flanked opponent, instead of the usual +2, and deals an additional 1d6 damage.

Water Crashes Against the Shore: A swordmaster learns how to balance herself to be as immovable as rock. She gains a +10 bonus to balance checks, and checks against being knocked from her feet, or moved against her will.

The Farmer Harvests Wheat: A swordmaster learns how to strike through legs and armor with as much ease as a farmer harvests his crops. As a swift action she readies herself with a concentration check with a DC of the armor class of the creature she intends to attack. Then she strikes. She must take an attack action. If the attack hits the targets base land speed is halved for a number of rounds equal to the swordmaster's strength modifier, and an amount of damage reduction, equal to her strength modifier, is ignored.

The Smith Strikes the Anvil: A swordmaster learns how to strike at a formation of foes so that they will break formation. When she succeeds a bull rush, all adjacent enemies are pushed back 5 feet, and the one she bull rushed is pushed back 10.

Dandelions on the Wind: The swordmaster learns to attack in many places at once with greater efficiency. Whenever she uses the whirlwind feat she may make a full attack against each surrounding enemy(instead of the usual one attack), and can make one 5 foot step in between any of these attacks.

Mobile Fighter: Swordmasters learn to be very dexterous and mobile in their style of combat. After hours of training they learn to move faster than is the norm for their race, and to dodge attacks that would seem to be sure to strike. At first level the swordmaster gains a +1 bonus to ac, and a +5 bonus to their base movement speed(all different forms of movement gain this bonus). She must practice for an hour each day to maintain this ability. At third level, the bonus to armor class increases to +2, and at 5th level the armor class bonus increases to +3. At 5th level the movement speed bonus increases to +10.

Bonus Feat: At 2nd and 4th level, the swordmaster gains a bonus feat that she meets the requirements for.

The path of a swordmaster requires complete devotion and dedication. If a swordmaster ever multiclasses into a class that doesn't have proficiency with all martial weapons, they can never take another level of swordmaster.

A variation that could be interesting would be to make the swordmaster a specialist in another weapon set.