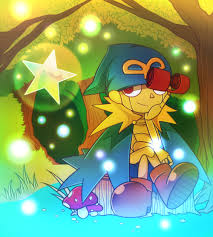 Geno, the most famous Star Sprite

Star Sprites dwell way above the Earth amongst the Stars in Star Road. They act as guardians of the Earth and are governed by a "higher authority." Star sprites are mostly in an amorphous form that looks like a small ball of light. Some say they can even hear the faint sound of small bells ringing when near a Star Sprite in their natural form. However, when Star Sprites travel to Earth they possess a puppet form. These puppets are specifically manufactured to combat any threats to the stability and peace of Earth.

Racial Traits: +2 Wis, -2 Str; Medium, 30ft base speed; can revert to natural sprite form a Diminuitive ball of light that is incorpereal and has a fly speed 15ft (average). In Sprite forms, none of the Puppet attacks or special abilities can be used.

Abilities: Star Sprites rely on their Dex for attacks and Wis for the effectiveness of their special abilities.

Alignment: Star Sprites are almost always lawful and see it as their duty to keep order and peace throughout the world. They tend to be good-natured but some will fall into neutral as they can be a little egotistical and self-centered.

Weapon Proficiency: Star Sprite Puppets are not proficient with any weapons except their puppet arm weapons.

Arm Weapon: Star Sprite Puppets utilize a unique ranged weapon that shoots various types of ammo from their arm. It begins with small finger ammo and as the weapon upgrades it turns into fiery cannon balls. See descriptions below.

Riding Star: Star Sprite Puppet can now summon at-will a riding star. This appears as a 10ftx10ft flat and thin surface that looks like a sheet of very bright fluorescent light. Most seem to emit a yellow light but not all. It has a carrying capacity of 500 lbs and has a flying movement speed of 100ft (good).

Super Riding Star: The Riding Star now emits a deeper and slightly reddish light. It has a flying speed of 200 ft (perfect). Also, it's riders can use a teleport, greater function three times a day.

8th Level - Double Shot: The next upgrade takes away some of the force but the Star Sprite Puppet is now able to shoot bullets from both arms. Must roll separate attacks per arm but they both use full BAB. Range 80ft, +3 weapon, d8 damage.

13th Level - Hand Cannon: This upgrade turns the arm weapons into cannon like guns. They shoots farther, harder and with explosive force. Range 100ft, +5 weapon, d10 damage. Upon impact, it does a 15ft radius of explosive force damage (1d8 Force) to any that don't make a successful Fort save (DC = the total attack roll of the cannon shot that is exploding).

18th Level - Star Gun: This upgrades the bright fiery power of a supernova to its attacks. Adds the Flaming burst ability to the arm weapons. On the explosion, if Fortitude save is failed, the target is also blinded for one turn. Range 150ft.

3rd Level - Star Beam: mp cost = 5. Shoots a non-elemental ray at a target. Upon contact deals 3d8 damage, Reflex save for half damage.

6th Level - Star Boost: mp cost = 10. Increases one target's Str by 4 (Might) for a number of mins equal to Sprite's Wis Mod. This becomes Might mass at level 12 and mp cost increases to 11, increases all friendly target's Str by 4 within a 20ft radius of Sprite.

9th Level - Star Whirl: mp cost = 15. Creates a spinning blurry aura that looks like stars and space are turning around the Sprite. All with clear sight of the Sprite become distracted (-4 to Perception and Insight) for # of rounds equal to Sprite's Wis Mod, and cannot take any actions on his/her next turn. Will save negates effects.