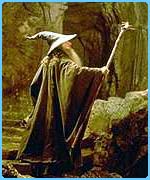 Thou shalt not pass, evildoer.

The staff is viewed to be a weapon of grace, and of power, and some mages have, thoughout the course of time, taught themselves to wield such a weapon skillfully in battle. Staffs are shaped to the personal attunement of the mage in question, and as such, such a staff reflects its master's magical affinities most soundly. The academies of Shapers and Binders in the lands of Thay possess staff-wielding progidies from which this particular mage caste was born and arisen.

A staffshaper is a master of the staff. The combination of his ability and his personal staff's enhancement makes a charged staff in the hands of the staffshaper a very dangerous weapon. Some of these staffshapers move themselves fearlessly to the front lines, even though their bodies are not inherently built for close combat. Others prefer to play it safe, and use their highly developed arcanery in order to greatly increase their longevity on the battlefield. A staff has limited different spells at its disposal, but oh, the repetition with which they can be cast... A wise and diligent staffshaper may fall back upon using only his own spellcasting ability when confronted with meagre to moderate challenge, as to make sure that his greatest weapon, his staff, is fully charged and ready when the greatest threats reveal themselves.

Spells: Must be able to cast 5th level arcane spells.

All the following are class features of the Staffshaper:

Weapon Proficiency: Staffshapers gain no proficiency with any weapon or armor.

Craft Staff: A staffshaper has the Craft Staff feat, even if he does not meet the prerequisites.

Impart Spell: At 1st and every even level of his progression, the staffshaper can choose one of the spells that he knows and can cast, and impart it within his staff. Spells of level 0 can't be imparted. From thence on, he can call upon the spell from his staff at will, provided he has sufficient charges remaining to cast it. Imparted spells with an XP cost cost 1 extra charge per 100 XP to cast (rounded up, to a maximum of 500 XP). Imparted spells with an expensive material component cost 1 extra charge per 200 gp of the component to cast (rounded up, to a maximum of 1000 gp). Spells that exceed these limits in either material cost or XP cannot be imparted. If only a limited application of the spell requires too large a cost (example, the creature calling effect of the gate spell) it can still be imparted, but this special application can not be invoked through the staff. Spells cast through the staff cannot be enhanced by metamagic substitution, although it is possible to impart a spell within the staff complete with its own metamagic enhancement. If a metamagic enhanced spell is imparted within the staff, its effective spell level rises as normal. Metamagic enhancement may not raise the spell to a level that the staffshaper is unable to cast. Every time that a staffshaper imparts one of his spells in his staff, he loses one spell slot of same as the imparted spell. At the beginning of the day, a staffshaper can replace one of his imparted spells. He can use this power once a day.

Efflux (Su): At 1st level, a staffshaper may choose a cantrip (0-level spell) that creates a passive effect. The cantrip will exude from the staffshaper's staff like a permanent effect or emanation. The effect or emanation may be suppressed or reactivated at will as a free action. In the case of an effect, anyone holding the staff may benefit from it. He may choose from among the following spells; dancing lights (centered on staff), detect magic, detect poison, light (centered on staff), read magic and resistance.

All the following are class features of the epic staffshaper:

Enhancement Bonus (Su): The staffshaper continues gaining +1 to its enhancement bonus every other odd level of his progression (+6 at 11th and continuing to increase one point every four levels thereafter). The bonuses to staff hit points and hardness continue to advance at the rate predetermined by Table: The Staffshaper's Staff.

Impart Spell: Every 6th level after the last level divisible by 10th (16th, 26th, etc.), the epic staffshaper may impart a new spell within his staffshaper's staff. These spells may exceed the usual limits of spellcasting in that they may be of a level above 9th, given that the staffshaper has spell slots above 9th level due to the Improved Spell Capacity feat and a sufficient casting-related ability score. Treat spells above 9th level as per Table: The Staffshaper's Staff. He may still not impart epic spells into his staff.