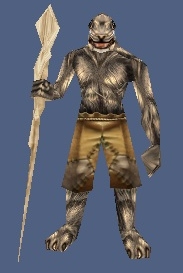 A spirit staff is a weapon often used by Trynnie mages and shamans. Spirit Staffs are magical wooden staffs granted to Trynnies shamans and mages who successfully petition the spirits of the woods in which they live for such a weapon. To petition for a staff is no easy task, as one first has to be skilled in magic or otherwise in harmony with nature in order to get the attention of the spirits in the first place. This usually requires one to devote much time to communing with nature in the forest. Once one has contacted the spirits, one must convince them that one has their best interests in mind and they have both the ability and will to protect the woods. Once a staff has been granted by the spirits, it cannot be taken back by the spirits save by force; a staff that is sold, given away, seized, taken violently, stolen, or lost can be used by anyone else without penalty.

The wood in a spirit staff comes from a tree in the woods in which the Trynnies live. Generally, it comes from an old and ancient tree, but younger trees have been used as well. Exactly how the spirits choose the tree for the wood in the staff is unknown, but it is believed that the trees themselves tell the spirits which wood to use.

While similar to a normal staff in many ways, there are some differences in the nature of the staff. The spirit staff is not only named as such because it is granted to a user by the spirits, but that the staff has the essence of a spirit of the woods within it, including a spirit's own essence if it uses a staff. This essence is not a soul but an imprint, a sort of memory that affects the living magic of the staff. As such, a staff unlocks more of its power to those that it senses have the knowledge of how to use the spells. The imprint has its limits, though, as it possesses neither will nor consciousness, so it cannot refuse to be wielded or cast all spells, simply limit what spells it can cast for a given individual, more akin to a set of instructions that govern a magic item than a thinking being.

The other difference between a normal magic staff and a spirit staff is that a spirit staff recharges daily by some unknown means, possibly by tapping into power from another plane. In any event, the staff fully recharges at the start of every new day at midnight, even if every spell had been used in the previous ten minutes. A staff does not gain extra uses, charges, or any bonuses for its spells if it is unused for days on end in the belief that it is "charging up".

A spirit staff grants its user the ability to cast spells which relate to nature. Each spell that can be cast by means of the staff requires that the user be of sufficient level to potentially cast the spell on his own, meaning that a more powerful user will be able to make greater use of the staff. While one has to be a mage or otherwise have sufficient skill in magic to use a spirit staff, one need not be a druid, be skilled in nature magic, or have the same number of spells in order to use the staff. Each spell can only be cast a certain number of times a day. Specifically, a spirit staff grants the user the ability to cast the following spells the following number of times per day, once the user achieves a certain level needed to otherwise cast the spells:

Spirit staffs come in different colors and sizes, based on the tree that gave up some of its wood. Outside of some very rare markets and a handful of merchants, spirit staffs are hard to find, and in any event are almost impossible to replicate.

Spirits of the woods in which the Trynnies live also use such staffs as a conduit for and a means of enhancing their power. These versions of the staffs are grown from the wood spirits themselves and are otherwise identical to the ones granted to the Trynnies.