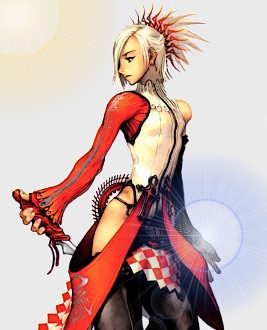 Soul Reapers are the hunters of evil ghosts, demons, and dark outsiders. They are always clad in black and found holding powerful spirit weapons. These fearless men and women are dangerous opponents with the ability to teleport across the battlefield in a split second. They can also release powerful energies from their blade to increase their speed dramatically.

All of the following are class features of the Soul Reaper.

Aura: Level 1. A soul reaper gains an Aura of Power equal to their class level similar, to a paladin.

This aura grants a +1 deflection bonus to armor class at 1st, 2nd, 7th, and 13th level. However, this ability is only active when unarmored and unshielded. It is surprisingly still active when asleep or unconscious.

Detect Evil: Level 1. A soul reaper can use the spell Detect Evil at-will.

Spirit Weapon: Level 1. Choose one weapon as your spirit weapon. The soul reaper can summon this weapon to himself as a free action, (even if the weapon was previously destroyed). This weapon is treated as masterwork and gains the ghost touch property.

This weapon can be enchanted similar to most weapons but requires 110% of the normal cost for every enchantment applied to it. The soul reaper also has the ability to change or apply an alignment to his spirit weapon if he meditates with it for one hour.

Spirit Armor: Level 1. A soul reaper is constantly under the effects of the Protection from Evil spell. This effect is always active and cannot be dispelled but the soul reaper can choose to suppress it.

Aura of Courage: Level 3. a soul reaper is immune to fear (magical or otherwise). Each ally within 10 feet of her gains a +4 morale bonus on saving throws against fear effects.

Release: Level 5. A soul reaper can release immense power from their spirit weapon. Once every encounter the soul reaper can summon the effects of the Haste spell upon themselves. This effect lasts for one round for every two character levels gained.

Every 5 levels thereafter, (10th,15th, and 20th) you gain an additional attack to use at your highest base attack bonus while hasted.

Haste Effect: When making a full attack action, a hasted creature may make one extra attack with any weapon he is holding. The attack is made using the creature’s full base attack bonus, plus any modifiers appropriate to the situation. (This effect is not cumulative with similar effects, such as that provided by a weapon of speed, nor does it actually grant an extra action, so you can’t use it to cast a second spell or otherwise take an extra action in the round.)

All of the hasted creature’s modes of movement (including land movement, burrow, climb, fly, and swim) increase by 30 feet, to a maximum of twice the subject’s normal speed using that form of movement. This increase counts as an enhancement bonus, and it affects the creature’s jumping distance as normal for increased speed.

Quick Step: Level 6. A soul reaper can teleport up to double their land speed as a double move action.

Healing Surge: Level 8. Once a day a soul reaper can regain 25% of their total hit points as a swift action. This can also be used anytime they take an extended rest at no cost.

Improved Quick Step: Level 11. A soul reaper can teleport up to double their land speed as a single move action.

Holy Weapon: Level 16. A soul reaper's weapon gains the Holy property. Granting a +2 to hit and 2d6 holy damage against evil enemies. This does not stack with similar effects.

Greater Quick Step: Level 19. A soul reaper can teleport up to double their land speed as a swift action.

A multi-class soul reaper has the class features of all other classes suppressed while assuming the form of a soul reaper. Features such as special abilities, spells, and class proficiencies. However, they still retain their Hit Dice, base attack bonus, skill points, and save progressions.

This works vice versa, as well. As the soul reaper's abilities are suppressed when assuming the form of another class. A soul reaper may transition between forms with ten minutes of meditation.

Other Classes: Empathy with other Soul Reapers.

Meditation: Meditation is similar to reading a book. It's an act of concentration and mental absorption. You can still perform some minor tasks while meditating, such as eating or walking, just like reading a book.

Soul Reaper's in the World[edit]

Characters with ranks in Knowledge(religion) can research Soul Reapers to learn more about them. When a character makes a skill check, read or paraphrase the following, including information from lower DCs.