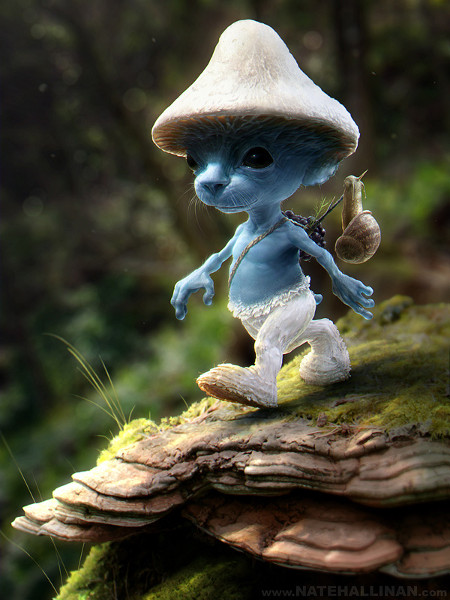 Smurfs are mostly hairless, not growing facial hair until around 400 years of age. They are incredibly tiny and blue, and have stout body types somewhat resembling children. They also have a tiny blue tail, and we count only four fingers on their hands. They are in the vast majority male. They always wear a Phrygian cap.

Smurfs get along best with elves, finding a shared love of nature and radical leftism. They get along poorly with half orcs, who are generally eating them.

Smurfs are generally lawful within their own society, and neutral to support their love of nature.

Smurfs tend to live among mushrooms or otherwise equally divided plots of land. They are not fond of the city, where they must fear the big folk. Smurfs are believed to originate from a forest in southern Belgium.

Smurfs have been known to pray to Mother Nature with miraculous effect.

Smurfs speak Smurf, a language that shares roots with Common. It may, to many laymen, sound similar to Common - augmented with adjectives, verbs, and descriptive nouns centered around manipulations of the word "smurf" - but in fact is its own language. Smurfs can choose bonus languages of Elven or Fey.

Smurfs all have the surname "Smurf". They might add suffixes (Smurfette) or apply titles (Papa Smurf) to allow them to discern between individuals.