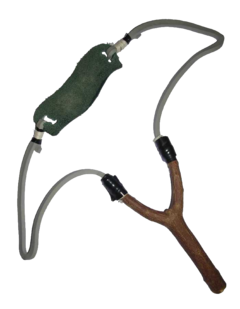 A slingshot has a strong pair of rubber bands attached to a Y shaped handle. The slingshot hurls lead bullets or stone shards. It doesn't shoot as far as a normal sling but has the advantage of increased accuracy. It is favored by druids, halflings. Your Strength modifier applies to damage rolls when you use a slingshot, just as it does with thrown weapons. You need at least two hands to use a slingshot.

You can hurl ordinary stone shards with a slingshot, but stones are not as dense or as round as bullets. Thus, such an attack deals damage as if the weapon were designed for a creature one size category smaller than you (for instance, 1d3 instead of 1d4 for medium size), and you take a -1 penalty on attack rolls.