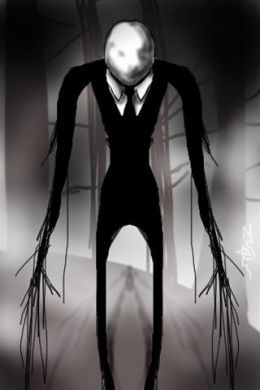 The creature looks on with its featureless face, a red tie visible in the crest of its crisp black suit. It looks almost humanoid in shape, but its arms and legs stretch far too long. Tentacles sprout from its back and wave slowly as the Slenderman stands motionless.

Slenderman, just as his name implies, is exceptionally slender and only takes up a space of 5 ft. even though his size is Large.

Dark Vision (Ex): The Slenderman can see in the dark up to 90 feet. Its Darkvision is black and white only, but it is otherwise like normal sight, and the Slenderman can function just fine with no light at all.

Frightful Presence (Su): The Slenderman is so terrifying in nature that any creature who has fewer HD than the Slenderman that looks at him must pass a DC 19 Will save. On a failure, creatures with 4 or less HD become panicked for 2d6 rounds and those with 5 or more HD become shaken for 2d6 rounds. If a creature saves successfully, they are not affected by the Slenderman’s Frightful presence for 24 hours.

Skills: Slenderman has a -14 racial modifier to Swim checks.

Teleportation (Sp): Once per day, with a successful Touch attack, the Slenderman can transport its target up to one mile to a secluded, wooded area. The target cannot appear in an area that would be hazardous; over a ravine, for instance. The Slenderman will usually leave other combatants to stalk and eventually attack this person.

Tall Like the Trees (Ex): When in a heavily wooded area, the Slenderman recives a +10 to all Hide and Move Silently checks.