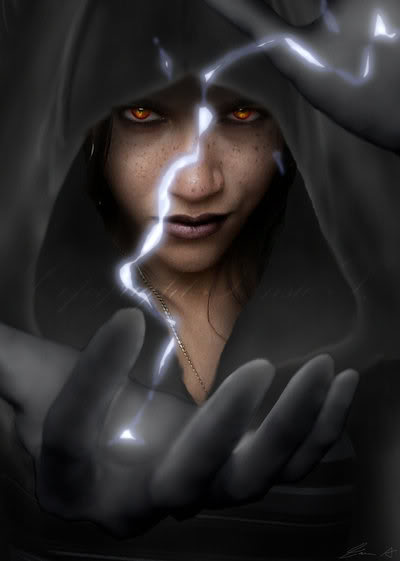 A Siphon Specialist preparing a Life Siphon tether, just before it turns a black and red speckled colour to be linked to some poor, poor enemy.

A Siphon Specialist uses his/her own health to heal others, but can also siphon health from his/her enemies to replenish his/her own. Can come to rely on CC, if felt necessary.

High heals, but uses own health to do so.

Races: Any race with a propensity towards Evil alignments, but some may take it for other reasons.

Alignment: Any Evil or Chaotic, though Neutral Evil would be the most likely to pick this class.

Weapon and Armor Proficiency: Quarterstaffs, Sacrificial Daggers, and other magic based weapons. Siphon Specialists have no armour or shield proficiency.

Life Siphon (Sp): The Siphon Specialist can cast Life Siphon as an at-will, spell-like ability on a single target as a ranged touch spell within 20ft. Life Siphon can either siphon life from him/herself to heal an ally, or to him/herself to heal him/herself with a few side effects. Damage/healing is 1d12+caster level, with an additional 1d12 per every other level after the first. Refer to class table for scaling.

Life Siphon: Duration: Life Siphon has no duration, however after the first 2 rounds the Siphon Specialist must pass a concentration check.

Life Siphon: DISCLAIMER: Life Siphon CAN NOT siphon more health than an enemy has, and can not drain life from the Siphon Specialist past 1hp. Once either of these conditions is met, the link is automatically broken.

Mass Life Siphon (Sp): As Life Siphon, but effects all enemies/allies in range and has a chain effect to those within range of the effected.

Mass Life Siphon: Enemy Effect: One or more links will be broken if a double Will Save is successful.

Mass Life Siphon: DISCLAIMER: Mass Life Siphon CAN NOT siphon more health than enemies have, and can not drain life from the Siphon Specialist past 1hp. Once either of these conditions is met, all links are automatically broken.

Daisy Chain (Sp): Making him/herself a conduit, the Siphon Specialist uses Life Siphon on an enemy and transfers health directly from the enemy, through him/herself, to an ally. Daisy Chain's damage is equivalent to current DC of Life Siphon, but uses Wisdom modifier instead of caster level.

Daisy Chain: DISCLAIMER: Daisy Chain CAN NOT transfer more health than an enemy has. Once an enemy has died from damage, the transfer is automatically stopped and the link is broken. Can ONLY be cast if BOTH enemy AND ally are in range.

Mass Daisy Chain (Sp): As Daisy Chain, but effects all enemies/allies in range. Does not have the same chain effect as Mass Life Siphon.

Mass Daisy Chain: DISCLAIMER: Mass Daisy Chain CAN NOT transfer more health than enemies have. Once all enemies have died from damage, the transfer is automatically stopped and all links are broken. Can ONLY be cast if AT LEAST one enemy AND ally are in range.

Life-Learned (Ex): The Siphon Specialist is wise beyond his/her years, and so gains the Life Learned effect at level 1. Also because of this, they gain a +4 bonus to their Wisdom.

House Complex (Ex): If life is a puzzle, then the mind and body belong to the jigsaw category. The Siphon Specialist has intimate knowledge of anatomy, and therefore gains the Educated Healthcare effect of from level 1.

Mind Over Matter (Ex): The Siphon Specialist focuses his/her willpower* to ensure optimum health at all times. He/she gains maximum hit points for every level of Siphon Specialist that he/she takes. This does not apply to any levels from any other classes or racial Hit Die. As well, this ability adds your Constitution modifier to your Intelligence.

Tunnel Vision (Ex): The Siphon Specialist is much more attuned to toning everything out to focus wholly on what they're doing. Starting at level 1, they gain a bonus +5 to concentration, a +10 bonus at level 2, and a +5 every other level from their on. However, this boost can only be obtained if an initial Concentration check of 18 or higher is rolled.

Soul Storage (Ex): Enemies that die at the hands of this ability have their souls consumed and stored in the body of the Siphon Specialist. For females this is in the womb, for males this is in the stomach. Women are rendered sterile because of this and are unable to have children, with the exception of a miracle... Or curse, depending on how you look at it.

Soul Consumption (Ex): Souls consumed by the Siphon Specialist grant one of two effects in combat, and one passive ability.

These are as follows:

Dead Pool: Health Pool added on as temporary hit points (max 150) with which to heal allies. Once these hit points are spent, they can only be regained by collecting more souls.

Ageless Souls: Souls not used by the Fast Healing or Dead Pool abilities are consumed during a long rest. Half of the life total of each soul rounded up is added to the maximum age of the character. Character can NOT gain true immortality through the Life Siphon ability, only a continuously growing functional immortality.

*: (Willpower in this instance DOES NOT refer to Will Saves.)

Spells: Siphon Specialist casts from its Wisdom stat, unless stated otherwise. Caster level is equal to what level of spells you can cast +2. Siphon Specialists can choose from the negative spells in the Cleric spell list, as well as a few select Sorcerer spells from the following list:

5th—Symbol of Pain, Waves of Fatigue

Power Over (Ex): Due to extensive knowledge of anatomy, as well as having mastery of mind power, the Siphon Specialist continuously gains stats and spells per day through the Epic levels.

Your memory is erased, and you gain amnesia for the entire time this class was utilized.

Other Classes: Fairly indifferent to most races and classes, just don't piss him/her off...

Combat: They revel in pain, and enjoy making their enemies do the same.

Advancement: Cleric and Sorcerer prestige classes can be used, however any other class used in conjunction will cut off your continued use of the Siphon Specialist, outside of those.

Siphon Specialists in the World[edit]

Daily Life: Constantly battling internally, mostly due to the souls consumed. Generally has little to no regrets, even with some of the... Questionable decisions that may be made.

Organizations: None. Characters of this class are generally products of the result of feeling abandoned, and are willing to put their life at risk to save those with whom they do manage to get close. Just... Don't piss them off...

Characters with ranks in Knowledge (Arcana) (Int), Knowledge (Planes) (Int), Spellcraft (Int) can research Siphon Specialist to learn more about them. When a character makes a skill check, read or paraphrase the following, including information from lower DCs.

Siphon Specialists in the Game[edit]

The Siphon Specialist is primarily a healer, but has minimal combat capability in the form of his/her Life Siphon ability. He/she might generally stick back, but are usually fine near the front lines, due to their high health and Life Siphon ability, though this class generally has a very low AC, making them easy to hit, but able to take the hit due to high health. Utilizing CC abilities to assist in the use of Life Siphon is common.