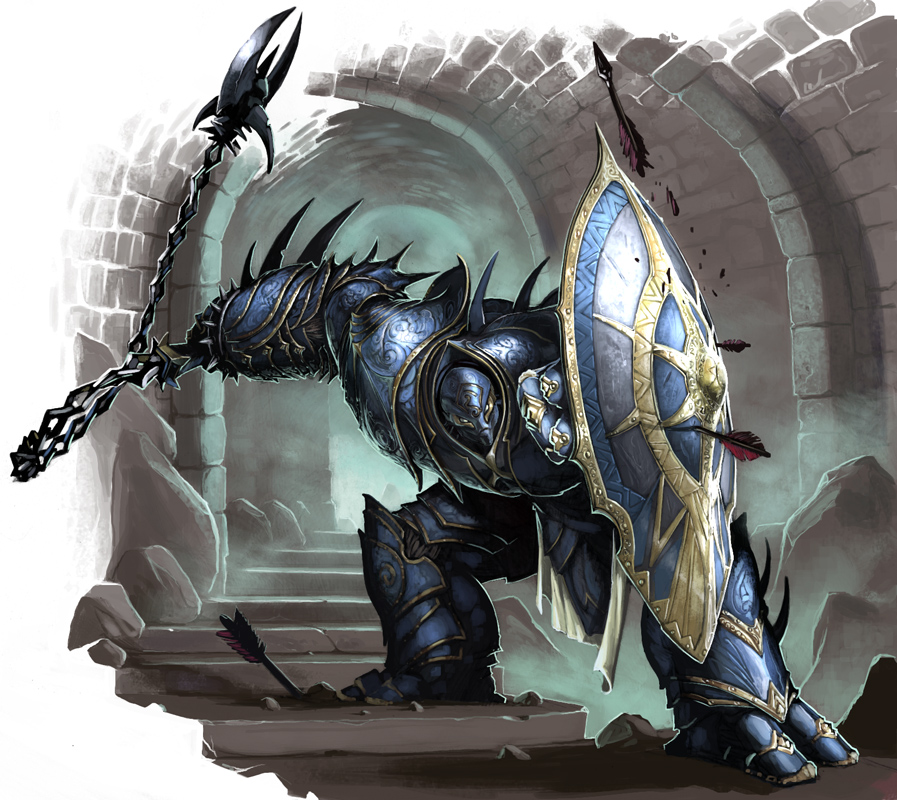 When you think about knights most people think of men (and sometimes women) in plate armor wielding martial weapons with great skill. They are noble born and raised or trained from a very young age to become the military elite of the European middle ages. But knights can be many things, some specialize in fighting with two-handed weapons, others focus on the art of mounted combat. There are also the few that think of others first and them selves second. These people hone their survivability by training in the most protecting armor and focusing on skills that will keep their friends and allies alive. These are the shield knights. The protectors of the weak and wounded. The Juggernauts that tread the battlefield blocking enemies path to allies and the shields that follow leaders.

Shield knights are people who wish to protect friends and allies and put others before themselves. They usually come from martial classes or classes that already use heavy armors. Fighters and clerics are common among them. A shield knight only need Dex and Con as the Dex helps with more AC and the Con gives more HP. You could argue that Str is a must too since he won't be able to deal damage otherwise, but that is not his primary role.

All the shield knights features are concentrating around their shields, armor and their ability to protect their companions. The "Broad Shield" ability you learn first is the core ability of this class and every other feature is more of a self buff then anything else.

All of the following are class features of the Shield Knight.

At level 1 a Shield Knight can use his shield to intercept attacks that are intended for his allies. To do this he has to make a Sense Motive against the opponent (this is a free action), if he succeed he moves into his allies space and pushing that person aside into any unoccupied location. You now compare the attack roll with the Shield Knights AC to determine if it is a hit or not. If there are no unoccupied locations around them, the shield knight and ally are forced back to back and count as if they are caught in a tight place giving them a –4 penalty on attack rolls and a –4 penalty to AC. This is all a immediate action for both the Shield Knight and the ally that happens just before the attack hits. The Shield Knight can only do this if the ally is attacked, the shield knight can't push his teammate aside unless he is attacked. At 1st level the Shield Knight can only do this for allies in adjacent spaces. This increases to 10 ft. away at level 5.

At level 4 the shield knight is such an opposing figure on the battlefield that he can as a standard action force all attacks within 10 ft. to be directed at him for the next round.
All opponent within 10 ft. must make a will save DC shield knights Flatfooted AC or use their next attack on him. The range increase to 20 ft. at level 6.

At level 8 the shield knight is the avatar of armor and protection and his mer presence negates a lot of harm. All allies with in 5 ft. of him gain DR 1/-. This increase to 2/- at level 10.

Beginning from the first level and ever following level the Shield Knight gains a Feat from the following list:

Starting at 3rd level the Shield Knight gains a +4 bonus on ability checks made to resist being bull rushed or tripped when standing on the ground (but not when climbing, flying, riding, or otherwise not standing firmly on the ground). At 6th level this becomes a + 8 bonus.
At 9th level the shield knight can use a move action to go into a special stance. He can only make 5 ft. movement in this stance, and cannot use his Protector intercept ability. But he is immune to all Knocked Down, bull rush or trip effects. It is another move action to come out of the stance.

You can play the shield knight as a front-line fighter using shields as his weapons or as a support figure focusing on taking and shrugging off damage meant for squishy team mates.

Advancement: Any class that utilizes heavy armor and shields are good advancement options. Either more AC, HP or maneuverability.

Resources: Many Shield Knights are affiliated with paladin orders, Royal Guards or organizations that resolve around defending people.

Shield Knights in the World[edit]

NPC Reactions: Depending on the setting they normally get the same reaction as paladins or fighters.

Characters with ranks in Knowledge (Royalty) or Knowledge (History) can research Shield Knights to learn more about them. When a character makes a skill check, read or paraphrase the following, including information from lower DCs.

Shield Knights in the Game[edit]

Shield Knights are guardians of the people or defenders of faith. You will mostly find them in cities or areas of conflict where their defensive skills can come in use. For low level concepts use things like: Squires, Defensive fighters and so on. For High level concepts: Temple or castle guards.

Players could use the above concepts or think up others that resolve around defending people or just the use of shields.

Adaptation: You could apply the same bonuses to medium or light armor. Though I would suggest lowering the bonuses you get. Maybe some other abilities that would help the user better.

Sample Encounter: The players are ordered to capture or slay a certain some one or raid a temple of a good aligned deity. As something goes wrong and the players must defeat the guards they encounter 4 heavy armored soldiers with tower shields and short spears.

EL 20: Using the above encounter the 4 Knights form up on a line. First they just block the players from their target but should they cast offensive or utility spells they synchronize their initiative and charge as a one. They use their Shield Mastery(Formation Expert) to its full potential stabbing and focusing down one player at a time. Should the players try to go around them they fall back to keep them selfs between the players and the one they are protecting. If the setting is high magic some of their equipment is enchanted with spell resistance, but that is purely op to the GM.