Bred specifically for combat by various aquatic races, battle sharks make ferocious guardians and will readily accept riders; though their intelligence is somewhat limited, battle sharks are surprisingly easy to train. Their eyesight is slightly better than that of regular sharks, though they still rely primarily on their sense of smell to detect prey.

Battle sharks use hit-and-run tactics, taking a "test bite" at anything that appears edible and then swimming away. If the shark thinks that the target would make a good meal based on the initial taste (and there are few things it doesn't think of as such), it will charge the target and continue biting until it dies.

DC 15: Battle sharks are vicious creatures, trained to defend their riders to the death. Its raw power is well known amongst many aquatic races, and its keen scent can detect the smell of blood from great distances away.

DC 20: Typically, a rider will use the battle shark to charge into melee, then retreat and perform the maneuver again. A battle shark without a rider simply bites at anything it perceives as prey.

Despite their predatory and aggressive nature, battle sharks make surprisingly good mounts and can work especially well in large groups, once it is taught that its rider is not food. 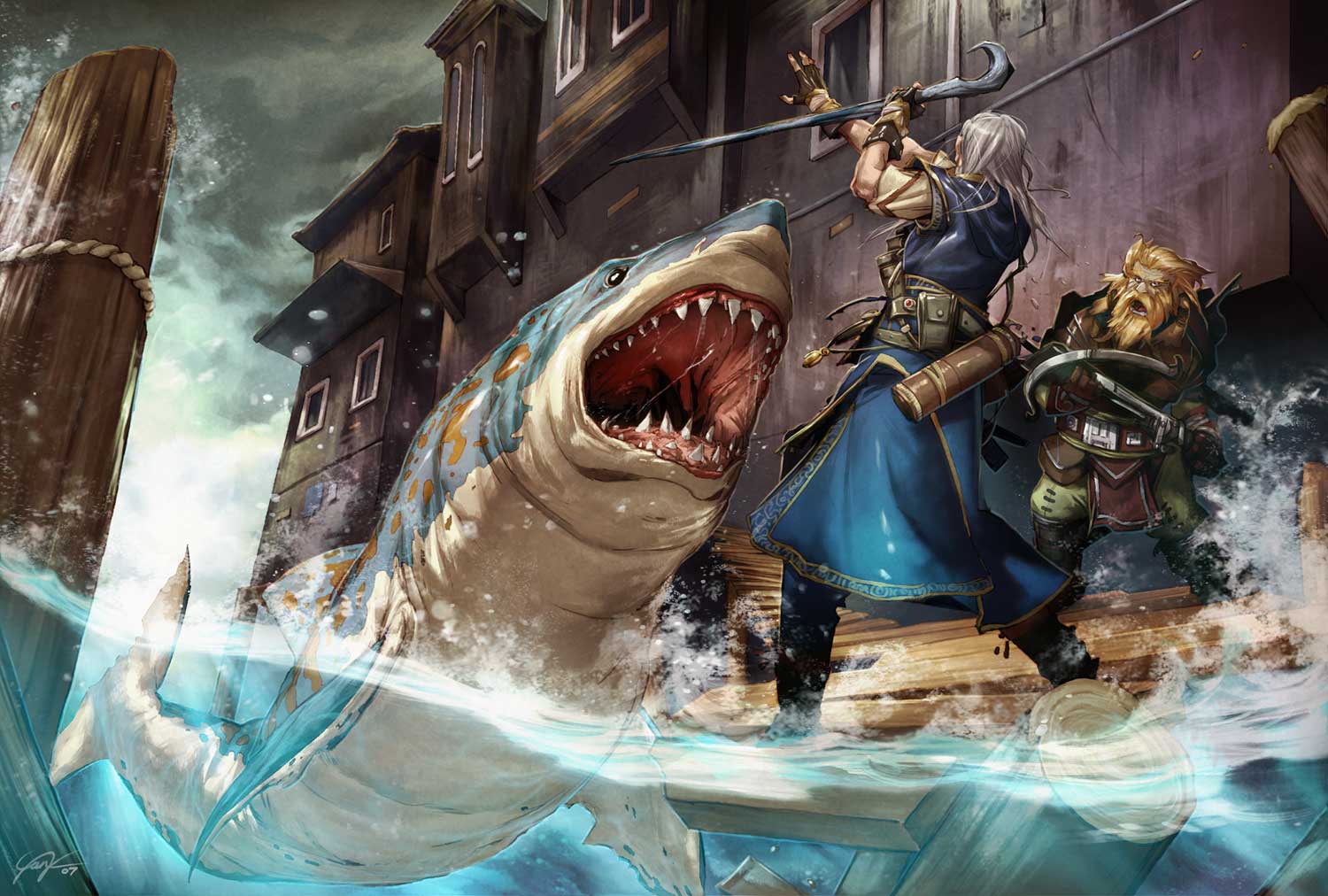 Being on land doesn't mean you're safe from a shark attack.

Bloodfin sharks are bred by sahugain specifically to serve as mounts for their four-armed barons. Trained for combat, these bloodthirsty fish will attack virtually anything that moves and have been known to injure or kill their riders when no other food is available. Although their name might imply a reddish color, bloodfin sharks are usually black or dark grey with lighter stripes along their backs.

Although certainly voracious, a bloodfin shark is attracted more to the scent of blood than it is to the taste of flesh, so it wounds as many opponents as possible. It uses devour blood every round, if possible. Once a target is bloodied, the shark will typically attack it to the exclusion of all others.

DC 15: Bloodfin sharks are among the most dangerous of their kind and have a taste for blood. They are bred by sahuagin, but can sometimes be found among other races.

DC 20: A bloodfin shark does not normally focus on one target until it is heavily wounded, at which point it will repeatedly attack the victim until it dies. These creatures sometimes turn on their riders, especially if the rider is injured or is unfamiliar with handling the shark.

Bloodfin sharks are bred to be bloodthirsty and can carry a significant load, making them appealing mounts. It is usually not a good idea to keep them around others of their kind, however, as they'll tear each apart in a matter of minutes.

Sharks are usually found in schools containing half a dozen or more members, but they can also be found in the company of intelligent aquatic races, whom they serve as mounts. Most encounters with battle sharks and bloodfin sharks take place alongside sahuagin.