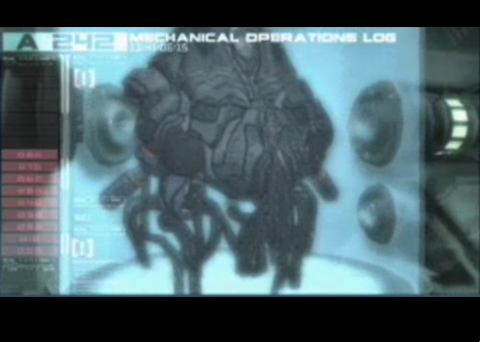 A Shadow A.I. is a potent intellect.

The tank bubbles and from the thick soup of mysterious liquid the form of a massive disembodied brain manifests. It’s “face” is metallic, with three mechanical eyes stacked one over another, a mouth composed of tentacles squirming beneath it, and from behind a bony spinal cord curls out like a tail. The creature is tethered by strange cables and large pipes connected directly into its mass, pulsing with psionic energy.

The Shadow A.I. is a joint effort in creating a single overmind to handle and coordinate large facilities of importance. Every mind and every thought is echoed on the Plane of Shadow, and through careful means these phantom thoughts are collected into a massive artificial intelligence, given anchor in a constructed body of metal, organics, and solidified shadowstuff, given life with a psionic spark which gives it a means to actively think and grow on its own. Outwardly, they appear as giant brains composed of flesh and metal intermixed seamlessly, with three glassy eyes stacked atop each other vertically, and a “mouth” of tentacles which is uses for physical manipulation and occasionally ingesting something, though it has no need to eat.

Created creatures, they are generally friendly and obedient to their creators. However, possibly not intentionally, they do possess free will, and can wreck havoc on the very facility they were designed to manage if not well kept. For this reason, their use is discouraged, except for the most harmless of tasks or as an adviser.

It may be a coincidence, but the arrangement of the eyes, the focus on retaining and storing memory for later use, and the need for moisture is hauntingly similar to the aboleth. Likewise its psionic presence and unique mouth is a little too similar to an illithid. It comes into question then if humanity were really the ones who designed the original A.I.

Shadow A.I. are immobile creatures, and even if built for war they disdain combat directly. With a facility under their control however, they can use the resources, traps, and other functions of their area against their opponent. Shadow A.I.s, especially those meant for combat, may be given an artificial body as well (see below, Construct Control). While it seems strange, a particularly careful shadow A.I. may also be using magic items, typically defensive. They possess two throat slots generally embedded within the folds of their body, two pairs of bracer slots for the thick portions of their tentacles, four rings on the slender tips of their tentacles, the face slot, the head slot, and the belt slot typically worn around their spinal cord. They do not have any other body slots, but conceivably barding could be made for its unique form.

If facing an opponent without the benefit of the environment, they employ powerful psionic attacks in the most intelligent manner befitting the situation if they can, including parleying if combat is a poor option. If their Protective Tank is broken, they become more frantic, but only resort to their tentacles under duress. By this time, they typically disconnect and flee.

A shadow uses it’s Int modifier for the purposes of saving throws. It also possesses 17 power points by virtue of race (1 per HD), though its psi-like abilities do not employ them.

Construct Control (Su): The Protective Tank is adaptive and can connect and fuse into any adjudicate vehicle or construct of Gargantuan or larger which the shadow A.I. currently controls as a full round action which provokes attacks of opportunity. It may then pilot said device manually. Through this means an A.I. and its tank are usually transported, or defended in case of emergency. While fused, the A.I. can still be targeted, but at a -4 penalty.

Dual Resistance (Su): A creation of magic, psionics, and biological tampering, a shadow A.I. has both spell resistance and power resistance of their HD + 11.

Environmental Grid (Su): A shadow A.I. typically defends or controls an area, such as a fortress. Casters can employ a special arcane mark on the items, constructs, and magical effects in the fortress, which permit a shadow A.I. to assume control of said functions at will, as if it were the caster or creator of said object. It also gains knowledge of the condition of the object, such as if the magically sealed door was unsealed, the golem was damaged, or the wall of fire spell was dispelled (but no other information). This effect extends out of a distance of 1 mile. Typically, a shadow A.I. is also given access to various scrying sensors in the facility so it can obtain a visual, and perhaps a permanent magic mouth spell which it can activate to warn someone. Needless to say, in a sufficiently trapped dungeon a shadow A.I. can be devastating, as it coordinates, plans, and funnels people where it needs them.

The Environmental Grid only functions if it is connected to its Protective Tank. When connected, the shadow A.I. loses its Dex bonus and is immobile.

Living Construct Traits: As a living construct it does not eat, sleep, or breathe, powered by the currents of shadowstuff from the plane of shadow. A living construct isn't subject to poison, sleep effects, paralysis, stunning, disease, fatigue, exhaustion, energy drain, nausea, or sickening. A living construct has some life process that are subject to failure and the creature is vulnerable to critical hits, nonlethal damage, ability damage, ability drain, death effects, and necromancy effects, nor can it heal damage on its own unless it also has the fast healing special quality. The various cure wounds spells from the Player's Handbook work on living constructs, but only at half effect; roll the spell's effect as usual, but divide the amount of healing in half, rounded down. The repair damage spells from Complete Arcane have full effect on a living construct. Finally, a living construct perishes at -10 instead of 0 hp, and can be raised and resurrected normally.

Protective Tank: All shadow A.I. exist within a protective metal tank with walls of magical glass which creates their home. Connected to this device, they access all the systems they have been granted permission to use, and have a potent defense, as well as staying moist. Indeed, they dry out easily when deprived of moisture, and are considered water-based creatures for the purpose of spells which deal moisture damage. The insides are filled with an organic soup of liquids, which provide the creature comfort and a +6 resistance bonus to saving throws (accounted for above). The tank is a magic item with a caster level of 21 (Value X, spells X, to make X and X). While inside the tank, line of sight and line of effect are not broken by the magical glass, though a dimensional lock exists within the tank itself and the A.I. cannot employ its tentacles through the glass without first breaking it. The A.I. may toggle the dimensional lock effect as a standard action.

Typically a shadow A.I. hurls spells, and relies on the tank’s protection against physical threats, and its dual resistance against magical threats. When attacking the tank directly it possesses the following: hardness 20, 120 hp, and a break DC of 40. It takes 150% damage from sonic, normal damage from fire and cold, half damage from acid, and no damage from electricity, and if emptied of liquid it re-fills in 1d10 rounds.

If its Protective Tank is destroyed, a shadow A.I. will immediately flee, heading for the nearest body of water to submerse itself in, and attempting to contact for aid, or possibly begin construction of a new protective tank. Shadow A.I.s fear null psionic field, and similar powers, as it can negate their psionic ability to fly, leaving them moving at a crawl.

Shadow Sight (Su): Linked to the Plane of Shadow through the nature of the way it stores information, it exists simultaneously on both the shadow plane and the material. It also lacks an extraplanar subtype on the Plane of Shadow and suffers no ill effects from planar traits. When in the material, it appears incorporeal on the plane of shadow. It can switch vision modes between the material and shadow planes, and all its psionic abilities can affect the plane of shadow.

Telepathy (Su): Being a psionic being, the shadow A.I. possesses telepathy out to a range of 100 ft.