The Selkans are very outgoing, though this may be because it isn't too hard for the psions among them to pry away secret thoughts anyway. They are usually cheerful, but do not enjoy pranks as much as the gnomes. They are also focused inwardly. One hour of each day is devoted to meditation in most Selkan societies, and selkans as a whole seem very existential and philosophical. Overall, Selkans seem calm, and do not really usually exhibit emotional extremes (though they still feel them).

Selkans don't really look like anything else. Their bodies are hunched forward, with long limbs and a short, though bendable, tail. Selkan elbows have two small horns jutting out, which serve no real purpose. The hands have an extra joint in each of the three fingers (and thumb). The legs seem like a dogs, to a point. They have a very short shin and an extremely long foot, and stand on the toes. The five toes of a selkan are flat, triangular, and hoof-like. They are slightly webbed. On the chest of all selkans is a patch of downy feathers. The skin of the selkans is off-white. The most striking feature of the selkans is the head. It is long, with two small horns coming down from the chin. On a large portion of the head is a large iridescent plate. The plate is completely smooth, and blue-green. It extends from just above the nostrils (there is no real nose) to the middle of the head. The shell is really made up of millions of tiny lenses, and composes the creature's eyes. It is protected by a clear shell and views the infrared portion of the spectrum. Behind the plate are the two long, upswept ears and a bony horn, similar to that of the parasaurolophus dinosaur. Selkans have no gender. They reproduce by congragating into groups of seven and linking their minds (similar to Metaconcert). Their fused mental power is used to draw raw elements together into the body of a new Selkani. A portion of that mind splits off to form the spirit and mind of the new being. Selkans do not age, though after several millennia they may choose to move on to the next world out of boredom. They usually stand between 4' 6 and 5' 6 tall. They have hollow bones and so do not usually weigh more than 140 pounds.

Selkans are not usually trusted at first because of their strange appearance and disturbing mental powers, but once the other race has had time to get used to the selkans and their ways, they are usually accepted. Selkans get along well with elves because of their shared, though differing, supernatural powers and philosophical bent. They get by with other races, but do not agree with the trickery of halflings or constant futile laboring of'Bold text'Bold text'

Selkans enjoy structure and logic, but still enjoy change once in a while. Overall Selkans are Neutral Good, though there are occasional chaotic or lawful communities. Neutral societies are rare, and evil ones are nearly unheard of.

Selkans enjoy the sea and coast, because it reminds them of their ancient home world, which they left ages ago when it fell into darkness. Their homes are usually clean, with few pieces of luxury, though their architecture is beautiful in its simple way. Their buildings are smooth and organic looking, actually made of psionicly modified sea creature shells. The shells are still attached to the animal, whose body provides a soft warmth which allows their eyes to see.

The old legend goes that at the peak of their civilization on their home world, the great psions called the people to engage in a mass metaconcert that would summon a guardian being so immensely powerful, it could challenge the gods. This was done, but the new Selkan god angered the old gods, who saw it as a threat to their supremacy. Being a deity in and of itself, the newly named Sharidnia could not be killed, so the gods sought to weaken it by destroying its followers. They unleashed a plague of vengeance upon the selkan home world, and they were forced to leave through huge Gates and find a new world on a new Material Plane. This is the one they found, the only one suitable to their biology. The being Sharidnia came with them, and then used its powers to forever seal the Gates. The selkans now worship Sharidnia as a God, but they have no organized church. One hour of each day is spent in meditation, and the selkans usually say their prayers then.

The selkans speak their own tongue which consists of 'normal' sounds, as well as clicks and whistles. Its written form is similar to the Illithid writing in that it is meant to be felt. It is possible that the two share a common root.

A selkan name is usually a concept or word from the natural world. This name is given and decided upon by the seven parents. The second name is formed by taking the first syllable of the first name of each parent and arranging them in order of age, oldest to youngest. 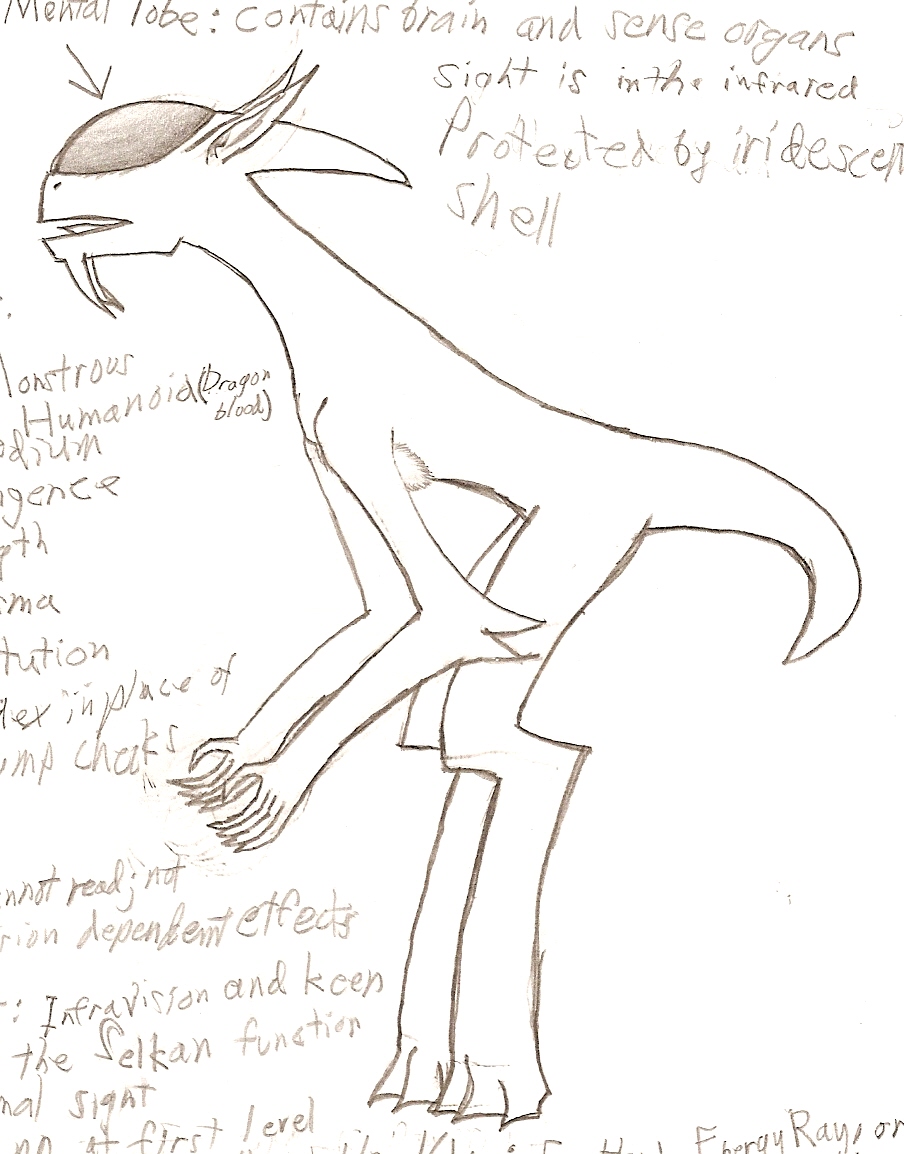