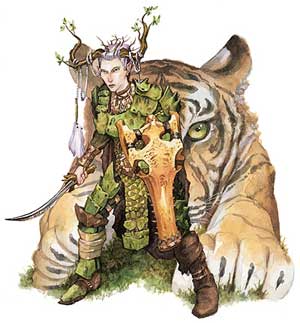 In front is an example of a Druid in her normal form. In back, is the Druid's Huge Tiger form achieved by advancing a normal tiger via her Favored Shape class ability.

"There is a great amount of power in adaptability. The more forms one unlocks, the more adaptable, and therefore, the more powerful he becomes. The Druidic Council does not condone this path. They are stuck in their old ways" --Notlad, the first Seeker

"Seekers" are people who possess the innate ability to assume other forms and have a particularly high affinity for nature. Seekers see the beauty in all of natures forms, not just animals and elementals.

Becoming a Seeker of Forms[edit]

Seekers are most often Druids or wildshape variant Rangers who wish to expand their shape shifting power. Just like Druids, Seekers are usually Elven races or Humans. It is not impossible for an outsider humanoid shape shifter (such as a shifter or doppelganger) to become a Seeker, but it is extremely rare.

Mental stats such as Wisdom, Intelligence, and Charisma are most important for Seekers since they take the physical stats of whatever form they assume. The most important stat is Wisdom, just as it is for druids, and the character most likely has some levels in druid or ranger which are also heavily wisdom dependent. Seeker's also can be masters of espionage and infiltration with their abilities, so intelligence is important for skill points and and high charisma is needed for better success in blending in behind enemy lines.

All of the following are class features of the Seeker of Forms.

Weapon and Armor Proficiency: Seeker’s gain proficiency with the Quarterstaff, Handaxe, Short sword, Longsword, Shortbow, and Longbow if they are not already proficient. Seeker’s do not gain any proficiency with armor or shields. NOTE: Druid metal armor and shield restrictions still apply. Druids and Seekers are prohibited from wearing metal armor; thus, they may wear only padded, leather, or hide armor. (A druid may also wear wooden armor that has been altered by the ironwood spell so that it functions as though it were steel. See the ironwood spell description, page 246). If a Seeker is proficient with a shield, it must be wooden. A Seeker who wears prohibited armor or carries a prohibited shield is unable to cast druid spells or use any of his/her supernatural or spell like class abilities while doing so and for 24 hours thereafter.

Shifter’s Speech: At 2nd level a Seeker learns to maintain his/her ability to speak normally (including verbal components of spells) regardless of the form he/she takes. Furthermore, he/she can communicate with other creatures of the same kind while in wild shape, if such creatures are normally capable of communicating with each other using natural methods.

Favored Shape: At 1st level and every 4 levels after, a Seeker may choose a single form (that he/she is already familiar with) that he/she can choose as his/her “favorite” form and become more proficient with it. Favored shape grants the PC the ability to be more like that animal. The PC gets the ability to advance creatures up to his/her HD (incurring all changes that would occur for advancement of HD and/or change in size). The Seeker may also choose what feats his/her version of the animal has (So long as they are monster feats such as improved natural attack, improved natural armor, snatch, etc), as well as any additional ability scores per 4HD gained. A Seeker may change his/her favored shape after he/she has already chosen, but he/she must spend a considerable amount of time in that form to learn all there is to know about it.

Fast Wild Shape: Starting at 4th level, a Seeker can use his/her wild shape ability as a move action, rather than as a standard action. This counts as a prerequisite for the Swift Wild Shape feat.

Ever Shifting Form: At 8th level, a Seeker has reached the pinnacle of his/her natural shape changing abilities. From this point on, he/she can use greater wild shape once per round, as many times per day as he/she wishes. His/her type changes to shape changer for determining what effects and items can affect him/her. In addition, the Seeker no longer suffers ability penalties for aging and is not subject to magical aging, though any aging penalties he/she may already have suffered remain in place. Bonuses still accrue, and the Seeker still dies of old age when his/her time is up.

Supernatural Wild Shape: At 10th level, a Seeker learns to stretch his/her power outside of what is natural. The Seeker gains all supernatural qualities and attacks of whatever form he/she takes.

Playing a Seeker of Forms[edit]

Combat: Seekers are usually front line fighters that use their forms to deal out massive damage. Seekers can also be tanks if they have chosen forms with exceptionally high natural armor bonuses and have armor with the wild enchantment.

Advancement: Seeker are usually Druids before they take the prestige class, and most often, seekers continue in the Druid progression after they have completed the Seeker of Forms class progression. Sometimes fully realized Seekers choose to take levels in Ranger instead to further progress their combat prowess.

Resources: Seekers are very rare, so they likely will not have any contact with other seekers except for an old master that taught them the class. Seekers can expect NO help from most Druidic Orders, but can expect the same amount of help as normal Druids would typically receive from commoners and other typical NPCs.

Seekers in the world are VERY similar to Druids. In fact, most people think they are Druids until they witness them using forms that are typically unknown to Druids. Seekers usually watch over an area of land and protect it from evil forces or anything that would harm the balance of nature. Occasionally, you will find Seekers on important quests, but it is usually a quest that is somehow tied to their piece of nature or it's safety.

NPC Reactions: Normal NPC's see you no differently then they would see a Druid. The only worry a Seeker really has is an old fashioned Druidic Order that is against the manipulation of Druidic power. Most orders are against such manipulation, not all.

Characters with ranks in Knowledge (History) or Knowledge (Nature) can research Seekers to learn more about them. When a character makes a skill check, read or paraphrase the following, including information from lower DCs.

Seekers in the Game[edit]

Seekers are known for being a bit of a "jack of all trades" class. Seekers make fantastic scouts using natural flying animal forms. They can appear as a normal animal of that kind and can scout usually without any resistance. They also make wonderful spys, given they have a good charisma score and good ranks in charisma based skills. Seekers are also very powerful melee combatants depending on the forms they choose.

Adaptation: You can replace any Druid NPC with a Seeker (assuming that they are not in, or have close ties with a Druidic Order). Reminder: Seekers are very rare though, so you should usually have no more than 1 in a single campaign. Seeker is also a good prestige class for a druid that doesn't wish to focus or use very much spell casting.