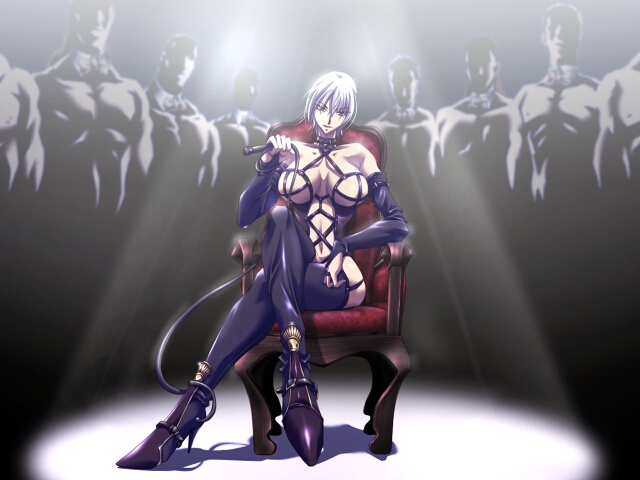 A seductress and her thralls.

The Seductress is a user of female wiles to gain ground on her male counter parts, as a succubus. Many seductresses are spies, using their social charms to disarm their opponents without a fight, and leave them vulnerable.

Alignment: Any Non-Lawful, Any Non-Good

All the following are class features of the Seductress:

Weapon and Armor Proficiency: The seductress is proficient in the use of all simple weapons, the sap, scourge (Complete Warrior), whip, net, and no armor.

Poison Use: When the seductress tries to coat her weapon in poison, she has no chance of accidentally poisoning herself.

Seduction (Ex): You can add your Seductress levels to any Cha based skill check if you are interacting with a person of the opposite gender.

Sneak Attack Progression: Your rogue Sneak Attack damage increases as if you were continuing to take levels in rogue.

Seductress Kisses (Su): A seductress applies various effects to another it lures into some act of passion, or by simply planting a kiss on the victim. If the target is not willing to be kissed, the seductress must start a grapple, which provokes an attack of opportunity. The seductress' kiss or embrace has the following effects (choose one at the time of the kiss):

Spellcasting Abilities (Sp): As the seductress levels, they gain several spells. They have a special pool of spell energy they can cast from. At 2nd level they can spontaneously cast any of their class gained spells 1/day. At the end, they may cast any of their spells 5/day. All spells are Cha based, and are subject to arcane spell failure. As per a sorcerer, metamagic feats may be applied by increasing the casting time.

From 2nd level onward you gain one new spell per level you can cast. You eventually have 9 known spells and 5 casts a day.

Secret Alignment (Su): Being an expert at hiding your true intentions, you gain the effects of a constant Undetectable Alignment spell of a caster level equal to your seductress level.

Silver Tongue (Su): Your ability to seduce anyone gives you the power to communicate your feelings, however false. You get the benefits of a constant Tongues spell of a caster level equal to your seductress level. In addition, you get a +4 competence bonus to saves vs attempts at detecting lies by magical means.

Hidden Mind (Su): Your mind and intent truly hidden, you gain the effects of a constant Mind Blank spell of a caster level equal to your seductress level.

A male version following the path of the incubus is likely. To do so change the name to something like "Seducer" and alter the names of the abilities. The flavor of a corrupting sexual influence remains the same.