The inhabitants of Vasuda were given horrible proof that they were not alone on the Material Plane when the Scrin invaded. An advanced alien species, capable of traversing lightyears of space, the Scrin were lured to Vasuda by the detonation of Liquid Tiberium with an Ion Strike. The creatures swiftly overpowered the Templar and Nod's combined defense effort, and began spreading Tiberium throughout the planet, so they might harvest it. All Scrin shre the following traits:

Scrin Traits: Scrin gain Fast Healing (TREM per hour/100) when exposed to Tiberium radiation. Scrin take double (x2) damage from sonic sources. All Scrin are connected to an Overseer via a hive mind. As long as one Scrin in a group is not flanked, none are considered flanked. If one is aware of a threat, they all are (which may lead to an escalation as reinforcement arrive). All Scrin are immune to magic that targets individuals, but are not immune to area effects. Scrin cannot use magic, even with the benefit of the Enduring Magic feat.

Here are some of the most common Scrin to have invaded Vasuda: 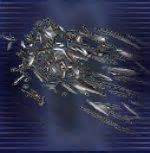 Buzzers are considered the most frightening creatures to Vasudans

A swarm of sentient, flying razors, buzzers are deployed to eliminate biological forces and terrorize populations. Bleed: Fortitude DC 21 or 1 point of damage per round for 5 rounds. Cumulative Shred: Fortitude DC 18 or 1d4 Constitution damage, as vital organs are lacerated

A Disintegrator, the bane of armored vehicles

A 4-legged creature with an attached energy cannon, disintegrators are used to destroy hardened structures and vehicles

Beam: A disintegrator uses it's energy cannon as its only attack. This cannon deals double damage to hardened targets, like vehicles or buildings

Volatile: If a Disintegrator is crushed by a vehicle, it explodes, dealing 6d6 damage to the vehicle

These quadrupedal, top heavy creatures are used by the Scrin for heavy assaults. Somewhat more intelligent than the average human, they are armed with photon cannons

Blink Pack: As a move action, the Shock Trooper can teleport up to 30 feet. Requires 2 rounds recharge

Only vaguely referred to in the Tacitus, a Foreman is a psionic Scrin, charged with commanding an army. Experts agree that the destruction of the Scrin Mothership must have killed the Vasudan Scrin's Foreman, thus leaving the Scrin's remaining forces without any commander. Logic dictates that a cerebral Scrin would not be a dangerous combatant. However, Foremen have never actually been seen, and their combat capabilities have not been ascertained. Use extreme caution if approaching a suspected Foremen lair.

What if the 'Psionics are Different' rule is in place?

The Scrin can easily be affected by psionics, as they have no Power Resistance. Furthermore, to give an interesting option to your players, implement the following trait for all Scrin
Userp Command: If one of a Scrin's mental faculties (Charisma, Intelligence or Wisdom) is reduced to 0 using psionic attacks, the psionic attacker may command the Scrin as a move action, as a [SRD3e:Turning & Rebuking Undead#Commanded|evil cleric commands an undead]