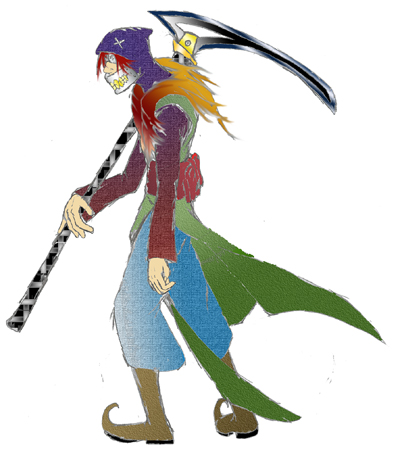 Scramble oftentimes appears as a tall and slender man in his late twenty, often with his Scythe. Scramble the Chaotic god of Fate was once a mortal; a vary insane mortal. Who at one point in time worshiped Erythnul the god of slaughter, and panic. One day however he befell a village inhabited by the strangest people he had ever seen, they acted so calm, so fearless, so passive it unnerved him even as he killed them, there composure didn’t change. Half-way through the massacre Scramble stopped, for the first time in his life he felt sickened by his actions. he started to cry and then he screamed “why, why do you not run or fight back, why do you not scream or cry as kill you and your loved ones, Why!?”

One of villagers stated. “It is Fate, fate that you would come here and fate that you had killed our loved ones, it is useless to fight against fate.” He couldn’t understand why even after killing half of the people in that village, they would just let him be. He did however understand the contempt of fate, and how it can be changed by luck, and ones ability to choose there own destiny, and so he set out to change the fate of villagers.

He started by authoring a number of scrolls that would later be call The Scramblesh Holy Doctrinaire, the scrolls however read like self-help books wrote by a drunken and deranged bugbear. But grammatical errors, profanity and misspelled words aside they were very popular. There are thirteen scrolls in all of The Scramblesh Holy Doctrinaire, the scrolls are:

Part two of Scramble’s plan to change the villagers was easier then authoring the scrolls, he would bring Oracles and gaming halls to the people. In his own words “ If palm readers and foretellers can show them fate is not set in stone, then losing there gold in the gaming halls will.” He was right for the most part, but as unforeseen conscience, as the years pasted the once small village started to grow into a city. As people of all races came from far and wide to have there fates foretold and make there fortunes. At that point Scramble who had became known as Lord Scrambles had no choice but to enact the optional part three of his plan, he called out to his city and said. “Hate you all, but that is not what I am here to say. To day I forsake Erythnul and I shall bring him to justice!” for the first time since the day he befell this land, he felt sickened by his actions. And it just so happened a number of gods over herd his speech, amongst them was Erythnul him self. And Erythnul wasted no time in expecting Scramble challenge, Scramble on the other hand was shocked to say the least, but his pride and overwhelming lack of self-control not to mention his other self-destructive tendencies spurred him in to battle with his former God. Oddly enough Scramble had hoped he would die, but no he was a mach for Erythnul at lest at the start. But as Erythnul was gasping the upper hand the gods Rao, Celestian, Lirr, and Istus acting on the authority of an unknown overgod stopped Erythnul and took Scramble. Years later Scramble returned to his home in the city of Fate as Intermediate god and inclosed it and the surrounding area into an extradimensional space, four magical gateways that open to the Material, and Transitional Planes. He then had a half-drow daughter named Lillam, the name of her drow mother is now known only by Scramble and his daughter.

Scrambles expiates vary little from his worshipers. He encourages them to read The Scramblesh Holy Doctrinaire and do as much as they can for them selves, and if they seek the powers of a warlock or to save your Child's life and make them into a Vindicator to invoke a pact him or his daughter Lillam. and the only things he discourages are Infernal & Abyssal Pacts, and wasting his time.