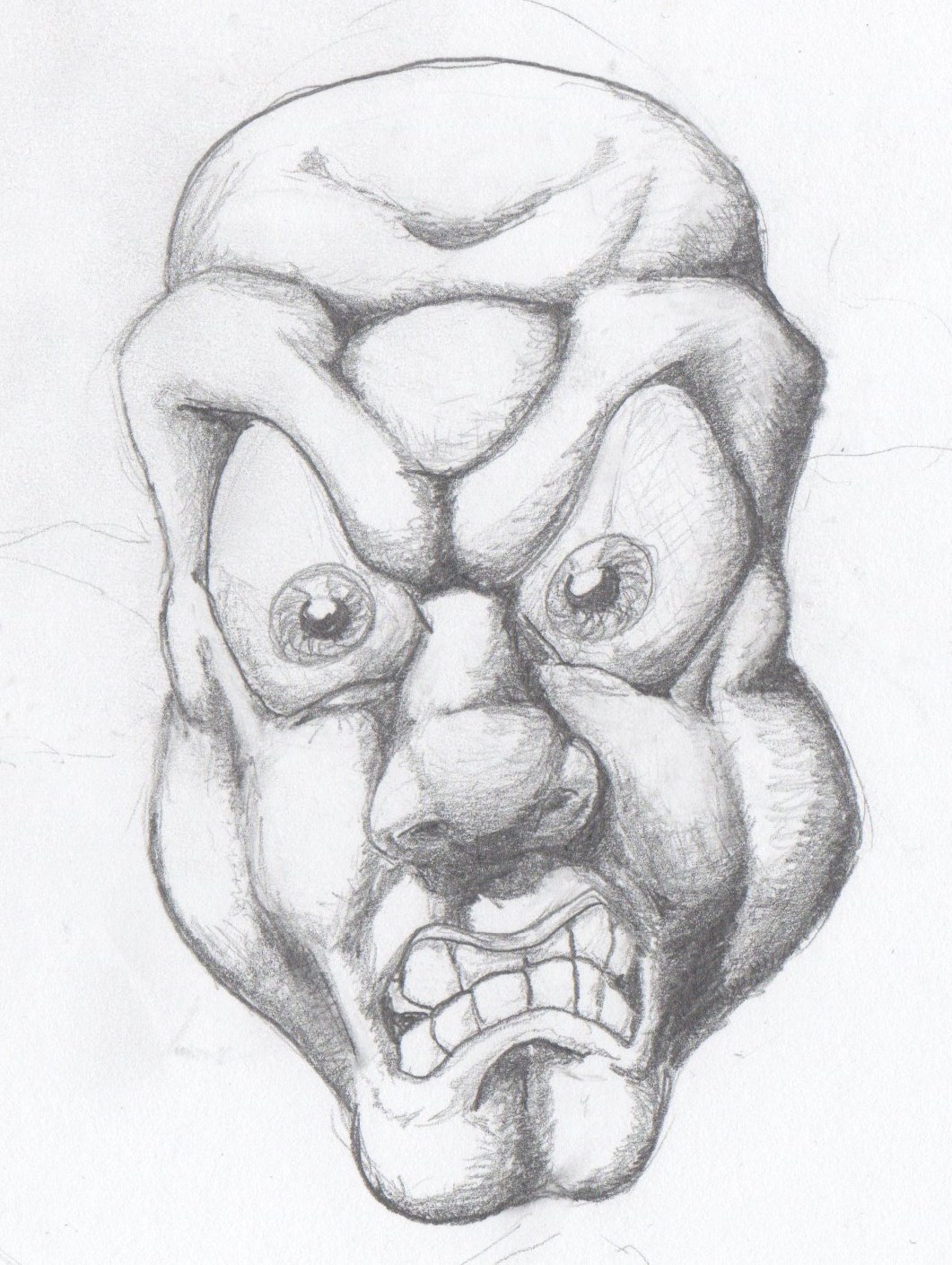 Immortal... and magic... and insane. Schtilmat The Most Wise, aka God of the Chosen Madness, aka The Shapeless Truth, aka Stham has presented himself in a number of ways. Most anyone you meet could be Schtilmat or has met him, and he'd prefer it that you look at it that way. When he's not altering his form (which he always is) he stands at average humanoid height, has greenish skin, and has no ears or hair.

Fond of any sort of stimuli, including the lack thereof, he engages in just about any and every activity imaginable, from practicing being dead to spending an entire lifetime as a child's pet. Everything is of interest and worth enhancing, including suffering. Nothing is of consequence or worth regarding, including pleasure. His only interest in anything is a matter of entrainment. And his interest in anything can change on a whim. There are things he has completely undone without a moments notice, and there are others that he has revered as sacred since his coming into being. There really is no telling where the lines are drawn or if there even are any lines.

...He really is quite mad. Schtilmat is insanity incarnate, some say. But those are just rumors.

He would insist that true Chaos either tips to one extreme of Good or Evil and is, at it's best, an interesting mix of both.

To him, all existence is an amalgamation of happenstance/fortune manifesting as insignificant details in the elaborate fantasy of a fervorous, melodramatic (sometimes monochromatic), and otherwise unstable mind... his, and for no other purpose than to learn and be amused.

(Some spend their whole lives in worship of other deities secretly believing them to be one of the many faces of Schilmat... At least, he and many of his followers would like to think so.)

Those that worship, observe, or otherwise pay homage to Schtilmat share only one common directive as set forth by him: "Try it... just see what happens. I DARE You.".

Schtilmat's temples take the form of brothels, schools, theaters, libraries, pubs, arenas, or any other public gathering places of entertainment and/or education. Reference of his visage and holy symbols are obscured and innocuously placed within these structures. Only a devoted worshiper would be able to spot and recognize the symbols and sigils found in the dark corners and obscure mantle-tops of a place that acclaims Schtilmat. The only things that would noticeably set these places apart from any other of their kind is that people within the walls of these structures have a tendency of behaving "oddly". If there ever is an actual dedicated temple where clergy of Schtilmat are to be found, it will be a temple dedicated to some other boring and weaker god. Priests and clergymen of Schtilmat will have infiltrated and taken over under the guise of being clergy for whom the temple was originally forged. Collecting tithes for personal use and bestowing whatever blessings or curses as they see fit for their own amusement. That is how homage to Schtilmat is paid, that is how ritual on his behalf is performed.

Any. Notably: anywhere you find Eris Goddess of Discord. Many question the relationship that the two share, but anywhere you can find Discord you're bound to find Madness. Some say that Schtilmat is father to Eris, some say that Eris is mother to Schtilmat, some say they are brother and sister, and some say they are lovers. Some also believe that we live in the skull of a chicken, so it just goes to show what rumors are worth. Whatever the case; they and their practitioners are often found either quarreling or making merry together, such as it is with the two of them. They share a deeply complex relationship as both best ally and worst enemy. That is, if one regards the other at all, which they sometimes don't. The nature of their relationship confounds most. But if you ask the accolades (of either one of them) you very well may be answered with "It makes perfect sense if you think about it." ...But then, of course, maybe not.

Schtilmat fears only himself and truly loves or hates likewise. Thinking himself to be the only mind that truly exists. He interacts with any other god as he would any other person or thing. Anything that he does, to or for another creature, he does regarding them as a part of himself that is interacting with, entertaining, or even testing him.

"Schtilmat, Have you made the acquaintance of my good acquaintance Schtilmat? He's a subject of great admiration for me. I realize that you must not think him to be too terribly amusing. But entrust in me, he sees himself as the pinnacle of hilarity! Personally, I bear the uttermost loathing for him. But, oh how he loves me so." -Schtilmat, The Most Wise (in an empty chamber)