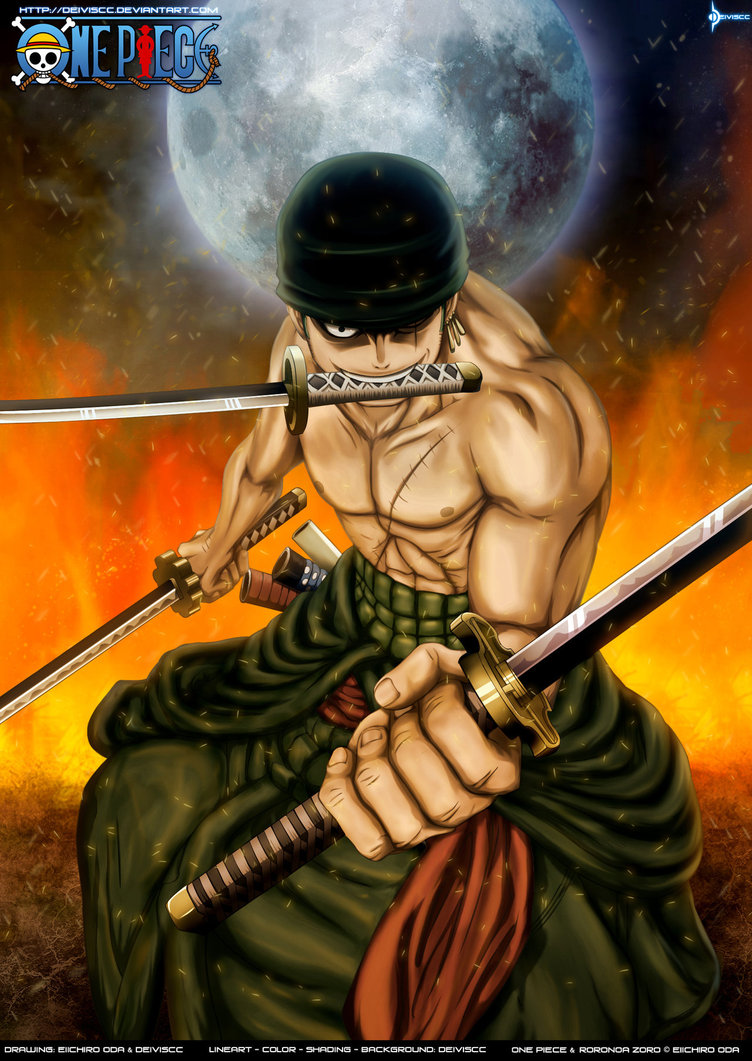 You're about to have a very bad day.

The santoryu swordsman is a very powerful physical combatant. By holding the hilt of a third sword between his teeth, the santoryu swordsmen is able to use a wide array of devastating attacks. This power can only be achieved, however, through great effort, and requires both immense strength and miraculous dexterity.

Those who pursue the way of three swords do so for one reason, and one reason alone: to be the best swordsman in the world. The unorthodox methods they use quickly attract fame, should they survive to enjoy it. A santoryu swordsman may enjoy the pain he inflicts in others, may desire the strength to protect those he loves, but no matter his motivation, he loves fighting. For this reason, a Santoryu Swordsman may be of any alignment. Rangers are the most likely to consider picking up a third sword, but fighters and barbarians are not unheard of. The techniques of the Santoryu Swordsmen are simply unusable to those without both great strength and astounding dexterity. As with any melee class, constitution is of the utmost importance. Wisdom, Intelligence, and Charisma are for sissies.

Perfect Three Sword Style: Time can scarcely recall the awkwardness felt the first time the Santoryu Swordsman picked up his third sword. He will never again feel fatigued or exhausted on account of his blades, and can fight indefinitely. The penalties to attack are likewise eliminated. And finally, an sword being wielded provides a +5 bonus to AC.

Demon Slash: Per class level, as a standard action, if a Santoryu Swordsman has a strength modifier of +3 or greater, and a dexterity modifier of +3 or greater, he may attack with all three swords at once. This attack is both devastating and difficult to block. For this attack, his attack bonus is equal to his BAB+triple his dexterity bonus, and deals damage equal to the sum of each weapon individually (for example, if he has a strength bonus of +3 and is wielding three longswords, his demon slash would deal 3d8+9 damage). While exceptionally unexpected, it can be blocked with repetition. Any foe which has already been struck by a demon slash in an encounter receives an insight bonus of +10 to its AC against any further demon slashes.

Superior Critical: At level 2 Your attacks with your chosen weapon strike with great force, and deal grievous damage when striking at vital areas. Your critical multiplier for your chosen weapon is increased by 1. For example, a rapier now possesses 18-20/x3 multiplier and a scythe becomes 20/x5.

Tiger Trap: Per class level, while in total defense, if he has a strength modifier of +3 and a Dexterity modifier of +4, a Santoryu Swordsman may prepare a Tiger Trap. If he is targeted by an attack, but the attack does not damage him, he may immediately counterattack using two of his blades. This counterattack does not provoke attacks of opportunity, but it does remove the bonus to AC provided by total defense, as well as the shield bonus of two swords.

Phoenix Cannon: Per class level, if a Santoryu Swordsman has a strength modifier of +4 and a dexterity modifier of +4, as a standard action, he can slice the air with his swords, launching a blast of air, allowing him to attack with his blades at a range of 50 feet. This attack does only non-lethal damage.

Dragon Twister: If the Santoryu Swordsman has a strength modifier of +5 and a dexterity modifier of +4, as a full round action, he may make an attack against all enemies within range, using his BAB plus triple his strength bonus. This attack deals 3d8, and knocks the recipient of the attack prone.

Lion's Song: At level 10, the Santoryu Swordsman is treated as though he had the Die Hard feat (if he already has this feat, then he may choose a different feat). When he has negative hitpoints, if a Santoryu Swordsman has a strength bonus of +5 and a dexterity bonus of +5, he may ignore hardness when attempting to sunder any object. Further, he does not provoke attacks of opportunity during a sunder attempt, and +3 bonus on his opposed attack roll. Further, any and all attacks while he has negative hit points bypass natural armor and ten points of damage reduction.

Three Thousand Worlds: Once per day, if he has a strength bonus of +5 or more and a dexterity bonus of +5 or more, the swordsman may unleash his most dangerous attack: three thousand worlds. As a full-round action, he may make a charge attack ending with a Demon Slash. For this attack, his critical range is extended by two (20 becomes 18-20, 19-20 becomes 17-20, etc.), and each weapon he holds is treated as being one die size category larger than it actually is. Further, if the attack lands, he automatically rolls max damage. Whether the attack lands or not, the Santoryu Swordsman is immediately exhausted, and deals 100 points of non-lethal damage to himself.

Asura Form: Once per day, if the Santoryu swordsman has a strength bonus of +5 or more and a dexterity bonus of +5 or more, for three rounds he may transform into an avatar of swordsmanship, spontaneously growing two new heads and four more hands, each wielding duplicates of the swords he was wielding. While in this form, all bonuses attributes to three-sword-style apply for nine-sword-style.

Asura Demon Slash: Once per day, while in Asura form, the Santoryu Swordsman may unleash his ultimate attack. As a full round action, he may make a single attack with an attack bonus of his BAB plus nine times his dexterity bonus, and deals damage with every weapon he is wielding.

Combat: The Santoryu Swordsman is very clearly a melee combatant, excelling a cutting a swath through enemy forces. He is, however, susceptible to magical attacks, and will likely need support in any extended battle. He excels in single combat and small skirmishes.

Advancement: While the multiweapon tree of feats available to fighters is appealing to Santoryu Swordsman, the Strength boosts given by raging makes Barbarian an equally valid option.

Resources: Santoryu Swordsman, on the incredible off chance that they meet another of their vocation, inevitably fight to establish their own superiority. The loser will often seek training from the winner, or at the very least a rematch. However, the possibility remains that the winner will not desire to see another stealing his style, and execute him post-haste.

The Santoyu Swordsman is frequently an adventurer, but will often fall into a life of bounty hunting, piracy, or even law enforcement in his search for a worthy opponent. When not fighting, he is constantly training for the next fight. While he appreciates the power to be found in magic, he regards those who use it as taking shortcuts on the long-hard road to power; childish, and obsessive. Strength can be found only in strength, and the dedication to seek it day after day.

NPC Reactions: NPC's, meanwhile, are frequently terrified of anyone crazy enough to carry more weapons than armor into battle, and will avoid the Santoryu Swordsman unless they are desperate.

Characters with ranks in Knowledge (local) can research Santoryu Swordsman to learn more about them. When a character makes a skill check, read or paraphrase the following, including information from lower DCs.

Santoryu Swordsmen in the Game[edit]

While on the battlefield, whether PC or NPC, the Santoryu Swordsman will, without fail, either be on the front line of the fight, dead, or dying. Off the battlefield, he is rarely inclined towards inellectual pursuits, and is more often found training his body simply enjoying life to the fullest.

Adaptation: A Santoryu Swordsman would make an excellent rival for any melee based PC, regardless of alignment. Even if he is not morally, philosophically, or otherwise motivated to fight the party, the Santoryu Swordsman will frequently attack for the sole purpose of enjoying a good fight. Further, he may well be motivated to spare the lives of any who he considers a worthy opponent, which opens all sorts of story options.

Sample Encounter: Sailing, lost, upon the high seas, searching for his long-lost crew-mates and captain, Roronoa Zoro is frustrated, unpredictable and dangerous. Keeping afloat on little more than a dinghy, he has survived for the three weeks before sighting your vessel surviving on sake, moldy bread, and an inhuman exercise regimen. While his first priority in this meeting is to locate his missing friends, his pride is unperturbed by his poor nutrition, and his three swords are loosely holstered on his hip, as ever.