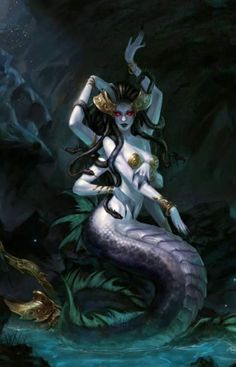 Sal'Goroth is the patron deity of snake-kin and leeches. She represents natural vamprism in the form of animals and nature. Vampires and vampire spawn are seen as perversions of nature and many cliercs of Sal'Goroth will make livings as vampire hunters. Worshipers often keep leeches and snakes as pets. Lampreys, vampire bats, and other typically repulsive creatures are revered as sacred creatures. Blood plays an important role in worship and many blessings come in the form of blood based powers. She is typically depicted as a gorgeous naga or godlike serpent.

The hunting of vampires and other unnatural "Bloodsuckers" is an honorable profession. Sacrifice of vampires at altars are smiled upon and typically preformed during rituals. Harming of any snake or protected creature is a major sin. Blood bathing is encouraged to retain vigor and become more in tune with Sal'Goroth.

The largest demographic of worshippers are naga and similar snake-kin.Temples are typically dark brooding places covered in moss, they tend to be outside of established towns or deep in the jungles or swamps. Snakes are fed and roam freely around the temple, however this could vary to any leech or serpent kind depending on the environment . Sacrificial dens are deep in the temple. Many of the temples have a main room where worshippers mingle and pray. Priests of Sal'Goroth wear ornate deep green and black robes, they tend to wear a lot of gold jewlrey. Cleircs of Sal'Goroth tend to be sneaky and underhanded but will become a great ally if you show any sign of respect for the serpent-kind.

None but has been known to have close relations to Arachne and her followers.