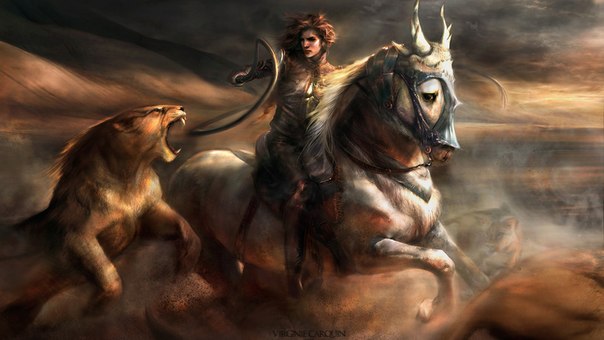 A rough rider and her mount fend off an attacking lion. Art by Virginie Carquin.

The rough rider is most effective when mounted. She has great melee and ranged striking potential, provided she is outfitted with the proper feats and equipment. However, when not mounted, there is little the rough rider can do, and is little more than a weak fighter.

Abilities: A rough rider's most important ability is either Strength or Dexterity, depending on the combat style she chooses. Charisma is the next best choice, as it affects her Inspiring Charge ability. Constitution is always useful, as it increases the durability of the class. Wisdom and Intelligence aren't as important.

Races: Anyone with a love of animals and adventure can take up the mantle of a rough rider, regardless of race.

Alignment: Any. From a Chaotic Evil bandit on a Large spider to a Lawful Good peacekeeper on a warhorse, rough riders come from all backgrounds.

All of the following are class features of the Rough Rider.

Mounted Combat: Once per round, when her mount is hit in combat, the rough rider may attempt a Ride check to negate the hit. The hit is negated if her Ride check result is greater than the opponent’s attack roll.

Special Mount: (Ex) The rough rider starts with an unusually intelligent, strong, and loyal steed. It can be any kind of animal so long as it is of an appropriate size for the rough rider.

Triumphant Charge: The Triumphant Charge is the rough rider's defining ability. It functions similarly to a normal charge action. The differences are as follows; triple base land speed, +4 to hit, no AC penalty during the action. This ability is usable once every 1d4 rounds.

Ride-By Attack: When she is mounted and uses the charge action, the rough rider may move and attack as if with a standard charge and then move again (continuing the straight line of the charge). Her total movement for the round can’t exceed double her mounted speed. She and her mount do not provoke an attack of opportunity from the target of their attack.

Trample: When the rough rider attempts to overrun an opponent while mounted, her target may not choose to avoid her. Her mount may make one hoof or claw attack against any target it knocks down, gaining the standard +4 bonus on attack rolls against prone targets.

Inspiring Charge: The upgraded version of Triumphant Charge. Functions as the previous ability, but upon charging, any allies in the vicinity become inspired by the rough rider's bravery and gain a +1 bonus to attack rolls and saves for a number of rounds equal to the rough rider's Charisma Modifier.

Dire Charge: If the rough rider charges a foe during the first round of combat (or the surprise round, if the character is allowed to act in it), she can make a full attack against the opponent charged.

Animal Affinity: The rough rider gets a +2 bonus on all Handle Animal checks and Ride checks.

Mounted Overrun: When using the Overrun combat maneuver, the rough rider's mount can overrun any number of opponents in its movement path so long as it moves in a straight line. If the rough rider chooses to make the Overrun maneuver a full round action instead of a standard action, it moves twice its normal speed. If the mount fails a Strength check at any point, the maneuver ends as normal.

Counter Charge: The rough rider may declare a Counter Charge as a readied action against any opponent who charges her. The action is triggered when her opponent comes within 5 feet of her reach. She take a 5 foot step forward and makes a single attack at her full base attack bonus. Her opponent suffers the -2 AC penalty for charging. On a successful attack, the rough rider deals double damage. On a critical hit, she rolls her critical damage, then doubles it. While this shortens the distance her opponent has to charge, it does not alter the bonuses and penalties of the charge if the opponent moves less than 10’ because of her action.

Improved Mounted Combat (2): Allows an additional use of the ability.

Extraplanar Mount(Su): At this level, the rough rider applies a template of her choice to her mount.

Wheeling Attack: The rough rider's mount may make a double move and she can still make an attack at any point along their path of movement at no extra penalty. This move cannot be a charge. The target of the rough rider's attack does not receive an attack of opportunity when she moves through their threat range.

Natural Rider: Any lightly loaded (non-magical) mount she rides receives a 10 foot bonus to its speed (all types – land, fly, swim, etc.). This bonus decreases to 5 feet if the mount is carrying a moderate load, and does not work with a heavy load.

Mounted Surfing: The rough rider no longer needs to make a Balance check to stand up while riding her mount.

Devastating Charge: The rough rider may now double the critical threat range of her current weapon during a charge.

Improved Mounted Combat (3): Allows an additional use of the ability.

Mounted Leap (Ex): The rough rider can will her steed to make jumps that would otherwise be too risky. When she takes a running start for a jump check while mounted, she gets a +10 bonus on the check.

Improved Inspiring Charge: The morale bonuses increase to +2 and last for a number of rounds equal to the rough rider's Charisma modifier x2.

Improved Mounted Combat (4): Allows an additional use of the ability.

The rough rider’s special mount is superior to a normal mount of its kind and has special abilities, listed below.

Rough Rider’s Mount Basics: Use the base statistics for a creature of the mount’s kind, but take into account the attributes and characteristics summarized on the table and described below.

Bonus HD: Extra eight-sided (d8) Hit Dice, each of which gains a Constitution modifier, as normal. Extra Hit Dice improve the mount’s base attack and base save bonuses. A special mount’s base attack bonus is equal to that of a cleric of a level equal to the mount’s HD. A mount has good Fortitude and Reflex saves (treat it as a character whose level equals the animal’s HD). The mount gains additional skill points or feats for bonus HD as normal for advancing a monster’s Hit Dice.

Natural Armor Adj.: The number on the table is an improvement to the mount’s existing natural armor bonus.

Str Adj.: Add this figure to the mount’s Strength score.

Empathic Link (Su): The rough rider has an empathic link with her mount to a distance of up to 1 mile. The rough rider cannot see through the mount’s eyes, but they can communicate empathically. Note that even intelligent mounts see the world differently from people, so misunderstandings are always possible. Because of this empathic link, the rough rider has the same connection to an item or place that her mount does, just as with a master and his familiar (see Familiars).

Command (Sp): Once per day per two rough rider levels of its master, a mount can use this ability to command other any normal animal of approximately the same kind as itself, as long as the target creature has fewer Hit Dice than the mount. This ability functions like the Command spell, but the mount must make a DC 21 Concentration check to succeed if it’s being ridden at the time. If the check fails, the ability does not work, but it still counts against the mount’s daily uses. Each target may attempt a Will save (DC 10 + 1/2 rough rider’s level + rough rider’s Cha modifier) to negate the effect.

Diehard: When reduced to between –1 and –9 hit points, the mount automatically becomes stable. A d% doesn't have to be rolled to see if it loses 1 hit point each round. When reduced to negative hit points, the rough rider may choose for the mount act as if it were disabled, rather than dying. She must make this decision as soon as the mount is reduced to negative hit points (even if it isn’t her turn). If she does not choose for it to act as if it were disabled, it immediately falls unconscious.

When using this special ability, the mount can take either a single move or standard action each turn, but not both, and it cannot take a full round action. It can take a move action without further injuring yourself, but if it performs any standard action (or any other action deemed as strenuous) it takes 1 point of damage after completing the act. If it reaches –10 hit points, it dies.

Fleet of Foot: When running or charging, the mount can make a single direction change of 90 degrees or less. It can’t use this special ability while wearing medium or heavy armor, or when carrying a medium or heavy load. If it is charging, it must move in a straight line for 10 feet after the turn to maintain the charge.

If the rough rider loses their special mount, they cannot use any of their mount's special abilities, but they can still use their rough rider class features. A rough rider doesn't suffer any penalties for multiclassing.

Improved Mounted Combat: This ability continues to increase every 5 levels after 20th.

Religion: Rough Riders don't have a particular religion they adhere to.

Other Classes: Rough Riders get along well with most other classes, depending on their alignment.

Combat: Rough Riders charge into the fray, devastating enemy front lines. Alternatively, they may skirt around the edges of the battlefield, eliminating high profile targets. They could also fire upon their enemies from range first to weaken them before charging in to finish them off.

Advancement: Rough riders typically stay the course, but more nature-oriented ones may take levels in druid and gain spellcasting power. Or if they want to be more useful when not mounted, they may take levels in fighter for bonus feats.

Rough Riders in the World[edit]

Daily Life: A rough rider has to spend a few hours every day caring for her mount and attending to its tack.

Organizations: Rough riders do not have their own organization.

NPC Reactions: This depends entirely on the alignment and bearing of the rough rider, but an ally is always more inspiring when riding tall.

Rough Riders in the Game[edit]

Rough riders fit in anywhere people have learned to tame animals and ride them.

Adaptation: A rough rider could be adapted to be a modern motorcycle rider, but her motorcycle obviously wouldn't get an intelligence score or special abilities which require sentience. In a futuristic setting, the rough rider could have a robotic mount or ride atop a mech that has its own weapons. A necromancy-oriented spellcaster who also has levels in rough rider could ride an undead mount to gain special advantages.