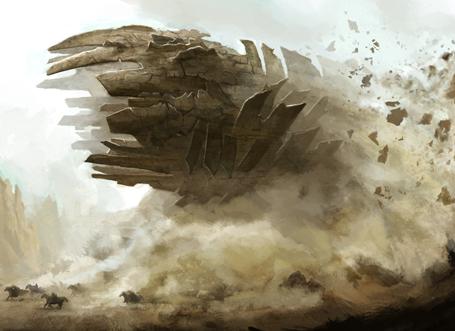 A gargantuan rock worm bursting out of the ground.

You feel the ground tremble as suddenly, beneath you, you see a fissure in the earth where none was a second before. You frantically try to move out of the way as a large rocky protrusion lunges straight up out of the ground under you. With cobblestones, rocks, clots of dirt, and shrubs flying in all directions, it flings you into the air. For what seems like a minute to you everything stops. Then, only a matter of seconds later, it stretches upward, suspended in the air by its submerged body, and catches you in its mouth, grinding its jaws over your armor. Your companion, a matter of feet behind you, puts his shield in front of his face, shielding himself from the flying cobblestones and debris, and squares his stance. After the barrage he charges forward.

Rock worms are native of the Elemental Plane of Earth, though some have also been spotted on the Material Plane, likely because of a stray gate or the intervention of a conjurer. They look like regular earthworms although they are exorbitantly larger and have an extremely tough hide composed from rock and calloused flesh, which covers them entirely.

While not necessarily carnivorous predators, rock worms will hunt and consume other living beings on occasion. This is because rock worms need to sustain their bodies by eating carbon-based organisms as a supplement to what they ingest from burrowing. They can cause many problems when near civilization due to their tendency to burrow, which can destroy foundations, supports, mines, and even pipe-systems. When encountered (and subsequently eradicated), they tend to cause a great deal of damage to the natural and built environments. Sinkholes are highly characteristic of a rock worm infestation.

Rock worms can burrow through stone (stone is considered difficult terrain), but they are normally found in areas consisting of softer soils such as desert, beach sands, or grassland dirt. When moving through such hard materials it leaves behind a usable tunnel about 5 feet in diameter.

A rock worm is about 40 feet long, 5 feet in diameter, and weighs about 50 tons.

A rock worm will then typically make a charging power attack. If overwhelmed it might perform an awesome blow in order to distance itself from enemies or it may writhe around, shifting the earth under aggressors' feet with a tremor. If it feels outnumbered it may burrow underground in order to fight on its own terms. Once there, if the worm's prey drive overrides its fear of death, it will repeat the tactics detailed above.

Burrowing Charge (Ex): When a rock worm is burrowing and directly below another land-bound creature it can perform a charge against the creature, which is considered flat-footed for the attack. Damage is applied as normal for a charge. All other creatures with in a 10 foot radius must make a Fortitude save of 26 (save is Strength based) or take 2d6 bludgeoning damage and be knocked back 10 feet away from the exit hole by flying rock and debris. A successful Fortitude save halves the damage and negates the knock back.

Blind: Rock worms have no eyes and are naturally blind. They incur all normal penalties for being blind, which can never be negated. The penalties, however, only apply against creatures the rock worm cannot pinpoint with its tremorsense.

Damage Reduction: A rock worm has an extremely tough hide that gives the creature damage reduction 10/-.

Dust (Ex): The powerful muscles of a rock worm vibrate the ground as it moves. The rock worm and all creatures within the surrounding 10 feet of the rock worm have a 20% concealment from the debris and soot it kicks up until the rock worm's next turn after surfacing.

Earthquake (Ex): A rock worm that is completely underground can use earthquake, as per the spell, three times a day with a 10 round recharge time between each use. Rock worms are immune to the effects of earthquakes, natural or otherwise.

Improved Grab (Ex): To use this ability, a rock worm must hit with its bite attack. It can then attempt to start a grapple as a free action without provoking an attack of opportunity. If it wins the grapple check, it establishes a hold and can attempt to swallow the foe the following round.

Swallow Whole (Ex): When a rock worm begins its turn with a grappled opponent in its mouth, it can swallow that opponent with a successful grapple check. Once inside, the opponent takes 2d8+12 points of crushing damage plus 8 points of acid damage per round from the rock worm's gizzard. A swallowed creature can cut its way out by using a light slashing or piercing weapon to deal 25 points of damage to the gizzard (AC 17). Once the creature exits, muscular action closes the hole; another swallowed opponent must cut its own way out. A Huge rock worm's interior can hold 2 Large, 4 Medium, 8 Small, 32 Tiny, 128 Diminutive, or 512 Fine or smaller opponents.

Tremor (Ex): As a full-round action, a rock worm that is at least partially underground can cause tremors by writhing about. This forces all creatures standing on the ground within a 60 foot radius around it to make a DC 26 balance check (DC is Strength based) or fall prone.

Tremorsense (Ex): Rock worms can sense the presence and movement of anything touching the ground within a 60 foot radius around it when the worm is at least partially underground.