While humans, elves and other sentient organisms who are exposed to Tiberium Radiation do mutate, wild animals mutate to a greater degree, since sentient beings can often avoid further mutation by refraining from further Tiberium exposure. Furthermore, the intelligence of an organism may play a factor in how far it mutates; an intelligent human may subconciously direct their evolution, where as a wild wolf cannot. Here follows a list of the more common and dangerous mutations:

One of the first mutated creatures to appear, the visceroid was encountered as early as 1405. Originally roughly spherical in shape and capable of emitting only small clouds of toxic Tiberium gas, it was weak and not much of a threat. However, these unstable blobs of flesh soon evolved and became an actual threat, with the ability to expel a highly concentrated stream of toxic gas at any fools coming close. The Visceroid of 1418 is a collection of pre-sentient protoplasm, with lightning-quick, extremely strong pseudopods and the ability to absorb great amounts of kinetic force. Smaller entities are relatively docile (colloquially referred to as "baby" visceroids), but larger specimens are capable of destroying entire cities. The Visceroid population is directly tied to levels of Tiberium poisoning. Tiberium gas is a corrupting agent, breaking down virtually any living tissue it comes into contact with. Long term exposure cannot be treated and causes a spontaneous breakdown of the affected tissues nearly instantly, as Tiberium saturation within them reaches a certain point. Smaller Visceroids can merge to form adult forms, which are significantly more dangerous. Unsubstantiated reports exist that some visceroids can reproduce, but most are unfortunate humans transformed by Tiberium. 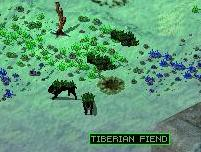 A Tiberian Fiend, in its natural (low-resolution) environment

Tiberium fiends are one of the many indigenous Vasudan species that have suffered some degree of Tiberium mutation. They typically stand about 5 feet tall at the shoulder, weigh around 400 pounds and have black or irridescent red skin. Their eyes glow an eerie green when struck by light at a certain angle, and their heads are elongated like a crocodile, their mouths full of sharp teeth. Like most other land-based Tiberium-mutated life forms, their muscular and skeletal systems are much denser, making them much faster and stronger, easily able outrun a biped and dismember and/or disembowel their target often with a single swipe. They are generally avoided by human populations. Their backs are covered with pure Tiberium crystals, which they launch at enemies and prey via high-pressure ducts in their snouts. Because these crystals are untainted by heavy metals and other minerals, they have the double effect of causing physical injury and accute Tiberium poisoning.

Breath Weapon: The Tiberian Fiend launches a shower of Tiberium crystals in a 60' cone, dealing 1d6 damage and 100 TREM (Reflex 19 half damage, no irradiation) 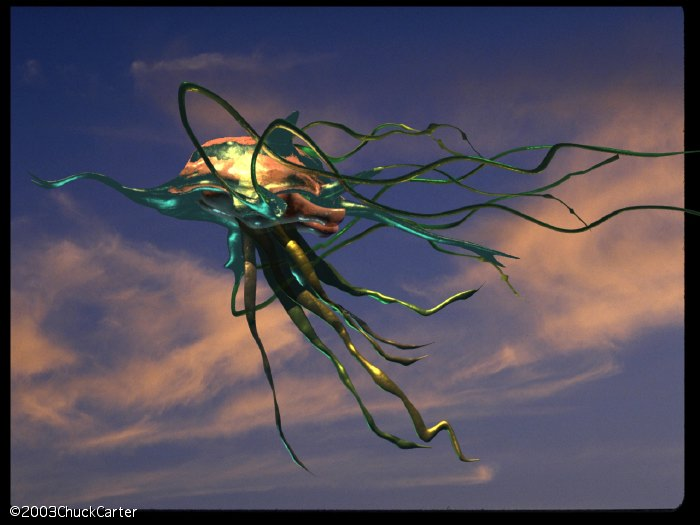 A Floater, one of the most desctructive mutations

Floaters are a species of strange, jellyfish-like creatures that began to grow more and more prevalent as time went on and as the first phase of the Firestorm Crisis was drawing to a close. Floaters float over the battlefield, releasing Tiberium gas to move them through the air. The gas is dangerous to infantry, potentially turning them into visceroid. To attack larger targets, they typically latch on the prey to both tear it apart with its tentacles and send vast quantities of electricity through the target. Ion Surge: If at least two of a floater's tentacles strike a target, a surge of Ionic electricity deals 2d6 damage to the target (Reflex DC 19 half)