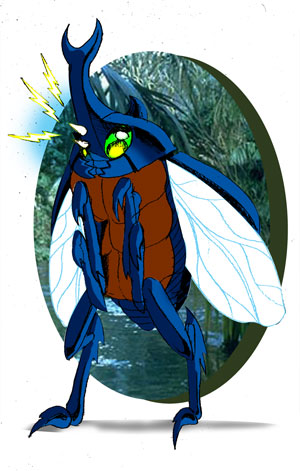 A horned beetle that shoots lightning and walks on its hind legs? Poppycock.

A giant armored beetle flutters in front of you, its great horn brandished. Then it stands erect on its sturdier hind legs, like a man.

The Quasar Kuwagata is a creature that is the size of the average man, but looks like the Japanese rhinoceros beetle, comonly known as the "Kabuto" beetle. This creature is rumored to be one the strongest in the world, able to lift 850 times its own weight. Its horn is a great forked thing, and two smaller horns beneath the larger horn make it immune to lightning of any kind. These same smaller horns allow the Kuwagata to emit bolts of lightning at will. The creature is able to assume a more humanoid stance by folding in its smaller middle legs and standing on sturdier and thicker hind legs. While most would avoid the Quasar Kuwagata based on its strength alone, its carapace and small horns are prized materials in the creation of non-metallic magic weapons and armor.

As during its mating combat, the Quasar Kuwagata lowers its head and charges. When in flight, it resorts to its electric ray but may also dive and strike with its horn.

Immunity to Electricity (Ex): A Quasar Kuwagata takes no damage from electricity.

Electric Ray (Ex): The Quasar Kuwagata may emit an electrical ray from its smaller horns as a standard action. It has a range of 100 feet. Upon a successful ranged touch attack, the ray deals 3d8 points of electrical damage. A successful Reflex save (DC 13) halves the damage. The save is Constitution-based.

Powerful Charge(Ex): When charging or diving with its mighty horn, a Quasar Kuwagata may make a single gore attack that deals 4d6+15 points of damage.