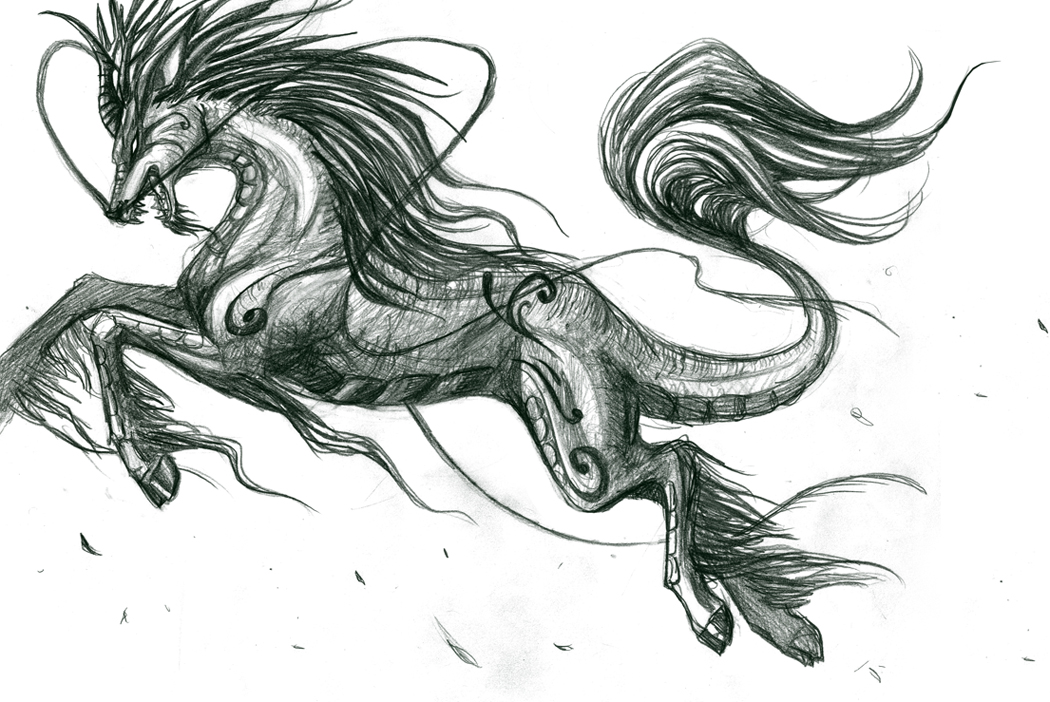 All thanks and awe go to Obiewolf at Deviant art for the drawing!

This is a 3.5e race. Qilin start off with 4D12 racial hit die. They have a Level Adjustment of +1, making their Effective Character Level (ECL) 5, at Class Level 0.

Every level, they gain 1d12 in Hit Die (HD) per increase in Effective Character Level (ECL) beyond ECL 5.

This race gains the feat Natural Spell at the start of adulthood, allowing them to cast spells when in their tattoo form, as well as any other form (if they have any other shape–shifting powers).

It is possible to use humanoid classes with Qilin, as they have a humanoid form, but Druid works best. It is recommended to pick one of the Good or Evil alignments, as there are some abilities that can only work with one of those alignments. It is possible to play as a neutral, but you may lose access to some of your abilities.

Qilin are also immortal, meaning they don't die due to age. Because of this, you can use them in more than one campaign, if they take place in different times, planes, universes, etc.

Qilin are wise and proud, as well as aloof. They rarely, if ever, travel with other Qilin unless they have decided to look for a mate. Qilin who have mates will travel with their mate until they give birth and stay with them until their children reach adulthood at 100 years old. The majority of Qilin see no need to lie, as it would be seen as a defilement of their noble, proud stature. There are always exceptions to the rule though.

Good Qilin revere nature as the best of Ao's creations and will therefore protect it zealously. There are few ways to anger Good Qilin, as they are normally mild–mannered, but there are a few ways. Destruction and ruination of nature will enrage them, as will bringing the HP of a Qilin halfway down. When enraged, their manes and/or any hair on their bodies (despite whatever form they are in) will burst into red flames.

Evil Qilin think highly of nature, but will not bother protecting it. There are many ways of enraging Evil Qilin as they are normally hot–tempered and arrogant. These include bringing the HP of one halfway down, offending their pride, and/or doing something completely random, idiotic and annoying. When angered, Evil Qilin will have their manes and/or any hair on their bodies (despite whatever form they are in) burst into icy blue flames.

Qilin are generally 8–12 feet tall in their natural form, although there are some that have been known to be 16ft tall. They have the body of a deer and the head of a Chinese dragon with antlers. They have a mane made of fur, and scales which covers the rest of the body. Qilin also have a tail which resembles that of the Ox. These creatures are unique in the fact that they are unable to touch the ground in their natural form. A small cloud will appear under every step of their hooves, allowing them to fly in the sky but never letting them physically touch the ground. They are also generally between 1,500–1,800lbs but this cannot be seen as they look practically weightless on their clouds. All of the fur that makes up the mane and covers part of their tail have colors which are unique to the individual Qilin. This is the same for their scales, however their antlers are always the normal brown. Regardless of any other factor, the eyes of a Qilin will always remain brown, even when in other forms.

Qilin can use their supernatural ability to become humanoids. In this form, Qilin are much like elves, but with antlers on top of their heads. They are generally around 5–6ft tall and weight about 140lbs. Unlike many elf–like beings, Qilin in humanoid form are "sun–touched", meaning that their skins are tan brown. They will generally have black hair, but it's not unheard of for them to have other hair colors. Their eyes remain brown.

Qilin can also use their supernatural ability to become 2–dimensional living tattoos. The size of the tattoo depends on the height and width of the creature they are transposed onto, but they are generally big enough to cover the chest or back. Qilin must be touching a creature's exposed flesh in order to become a tattoo. They look like a very realistic tattoo in this form, albeit one that can move. This form does not, in any way, hinder their sight unless the tattoo is completely covered up.

All Qilin are on good terms with nature-based or nature–related races, as well as most Magical Beasts. They have a general distrust towards humanoids, one of the exceptions being humanoids with nature–based classes. Humanoids trust Qilin to a certain extent as the majority of them are honest, as they see no need to defile their proud stature with lies.

Qilin prefer to live in areas of nature such as mountains, forests and plains. There are also those who have chosen to live in the oceans and seas. Their tails have elongated in order to help them traverse the waters. A favorite mating place for Qilin are the lands of wise leaders, as they believe that anyone born in the lands of the wise will grow to become a wise one themselves. The only place a Qilin truly feels uncomfortable in would be underground. No matter what form they take, all Qilin are uncomfortable being underground for any period of time whatsoever. However, this does not mean that they cannot go underground, they just prefer not to. Qilin prefer to roam all of existence, so they tend to not live in one place for very long (although no one has been able to determine exactly how long that is).

Qilin believe in the Overgod Ao. Some also believe in other Gods alongside Ao, but none worship God or Gods which go against Ao. They hold nature in high regard, and they protect and nurture it, as it is the birthplace of all things holy in the eyes of Qilin.

Qilin are go through a naming ceremony when they become adults. The names are usually nature–based, however there are Qilin that are given names representing the species' dragon heritage. Qilin with Elven names are not unheard of, but are few and far in–between.

Roll for percentage to determine if the ability is successful:

1–50: clouds created will not gather together into a storm (ergo, unsuccessful).

If Successful, roll percentage to determine the effects:

1–50: Clouds block the sun for the rest of the battle

76–98: Rain falls, and 2d6 lightning bolts randomly fall on allies and enemies indiscriminately throughout the battle (each bolt is 5ft wide, 30 ft long, does 3d10 damage +1d10/5 levels, only 2 bolts will fall per round, saving throw Reflex half, DC 17)

99–100: You cause Rain, 2d6 lightning bolts, and a tornado. Tornadoes have wind speed of 175–300 mph, all ranged attacks (including siege weapons) are impossible as are listen checks. Large or smaller beings are blown away, Huge beings are knocked down, Gargantuan or Colossal beings are checked. Characters in close proximity to the tornado who fail their fortitude saves (30) will be sucked towards it. Characters that touch the tornado will be picked up and whirled around for 1d10 rounds, taking 6d6 damage/round before being violently expelled (fall damage may need to be calculated). The tornado moves forward at 250ft/round. The tornado will last for 3d20 rounds.