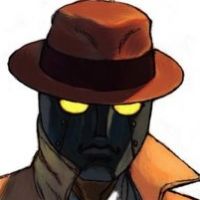 Q looks much like a medium sized human. He possesses powers that are clearly god-like and he frequently displays these powers. He seems to enjoy playing around with people but just about everything he does has a reason in the end. He always appears and disappears whenever he feels the need and he is prone to randomly place people or monsters in close proximity to each other.

Q randomly arrived in the pantheon about 4000 years ago. He claims that he was merely bored and decided that he would fiddle around with things here. The other gods give him a wide berth to do as he wishes and he largely stays to himself; he rarely associates with other divine beings.

Q possesses no organized clergy and, thus, no temple, but is known to interfere in the affairs of sentient beings