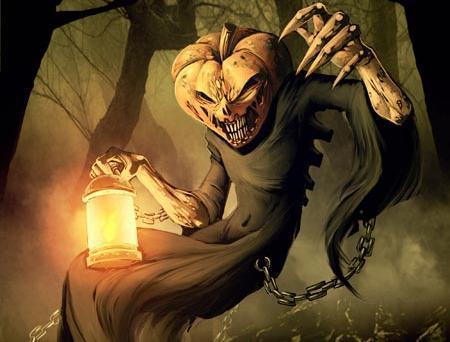 A pumpkin king after acquiring the Cornucopia of Death.

Pumpkin Kings are necromancers with an affinity for pumpkin-based magic. They command legions of pumpkin-headed undead, Children of the Vine, which burst into flames when destroyed. The sight of the ghostly flames that leap from the Children of the Vines' terrible carven visages can terrify even the staunchest warrior. The Pumpkin King can curse the very ground, causing desecrated pumpkin patches to form rapidly, soon to become haunted graveyards for those that dare enter. As if to compliment their twisted magic, the Pumpkin King's body warps, ultimately turning him into an abomination of nature as well.

Weapon and Armor Proficiency: Pumpkin Kings gain proficiency in the scythe, but otherwise gain no proficiency with any weapons or armor.

Spellcasting: Every level, the Pumpkin King casts spells (including gaining any new spell slots and spell knowledge) as if he had also gained a level in a spellcasting class he had previous to gaining that level.

Ghostly Stride (Ex): At first level, in natural environments, the Pumpkin King gain a bonus to their move silently and hide checks equal to their class level. He may move through any sort of undergrowth (such as natural thorns, briars, overgrown areas, and similar terrain) at his normal speed and without taking damage or suffering any other impairment. Thorns, briars, and overgrown areas that have been magically manipulated will not impede, affect, or damage him.

Entangling Pumpkin Plants (Su): At first level, 3/day, within a 400 ft. + 40 ft./level range, a pumpkin king can cause an above-ground earthen 40ft radius area to spontaneously sprout thick and overgrown pumpkin vines with fully ripened pumpkins. The vines wrap, twist, and entwine about creatures in the area or those that enter the area, holding them fast and causing them to become entangled. The creature can break free and move half its normal speed by using a full-round action to make a DC 20 Strength check or a DC 20 Escape Artist check. A creature that succeeds on a Reflex save is not entangled but can still move at only half speed through the area. Each round on your turn, the plants once again attempt to entangle all creatures that have avoided or escaped entanglement. Reflex save DC 10 + 1/2 class level + relevant spellcasting modifier. Duration of 1 minute per caster level.

Children of the Vine (Su): At second level, the Pumpkin King has learned to create a special undead, the Children of the Vine. This spell-like ability is at will, you may cast a special version of animate dead. This ability shares a control pool with animate dead. To use this ability, you must put both onyx and pumpkin seeds into its mouth or eyes. The value of the onyx is half of the normal cost required, but this cost reduction does not stack with any other. Any undead the Pumpkin King creates with spells, class features, or feats have vines growing and wrapping themselves around the newly created creature's limbs. One round after an undead under his control is reduced to 0 or fewer hit points, it explodes in a burst of flames. Creatures adjacent to an exploding undead minion must succeed on a Reflex save DC 10 + ½ HD of the undead creature + relevant spellcasting modifier or take 1d6 fire Damage per 2 Hit Dice. A successful save halves the damage.

Plant Spells: At second level, the spells entangle, spike growth, speak with plants, snare command plants, control plants, plant growth, diminsh plants, command plants, Transport via Plants, and wall of thorns are added to the Pumpkin King's spells known. The spells are known at the level they appear on the Druid spell list.

Patch of Doom (Sp): At sixth level, once per day a Pumpkin King may create a negatively imbued pumpkin patch of doom as a standard action within a range of 25 ft. + 5 ft./2 levels. He creates a 40ft square area covered in vines, leaves, and pumpkins, and he and his undead in this area gain Fast Healing 1 and immunity to Turning (but not Rebuking). A Patch of Doom is a permanent effect until it is burned clean and the area has a consecrate effect cast on it. Several uses of this ability can create a single and contiguous Patch of Doom covering a large area. The area of the patch is considered desecrated. Anyone eating these pumpkins is poisoned as if he had eaten Black Lotus. A Patch of Doom radiates moderate evil, and does not need light, water, soil, or nutrients to survive, but its effects are suppressed if it is covered in ice or snow.

Immunities (Ex): At tenth level, the Pumpkin King gains immunity to unholy damage, energy drain, negative levels, ability damage, and ability drain. His head is replaced with a carved pumpkin, its eyes and mouth glow with malevolent flames, though this has no game effect.

Cornucopia of Death (Su): The Pumpkin King will return to life if killed. On the next full moon, a body will be created for him in a Patch of Doom of his choice that he has created. He loses a level as normal for returning from the dead.

Combat: They are like all squishy spellcasters. Their legions of undead and pumpkin men can create a lot of havoc.

Advancement: After finishing the Pumpkin King class they often return to a former class or to another spellcasting-based prestige class like dread necromancer.

Resources: They are usually loners; a guild full of them would end up in a terrible bloodshed.

Pumpkin Kings in the World

Pumpkin Kings are never seen in cities or other well populated areas unless in disguise. They often lurk in the shadowy woods, waiting for prey so they can expand their legions of pumpkin men.

NPC Reactions: Pumpkin Kings are given a wide berth. Their mere appearance brings terror and a bad omen.

Characters with ranks in Knowledge (Local) can research undefeated to learn more about them. When a character makes a skill check, read or paraphrase the following, including information from lower DCs.

If one comes across your path, the best advice be to run. If one is in your party, be thankful they are less murderously inclined towards you.

Pumpkin Kings in the Game

Tome of Necromancy (DnD Other)