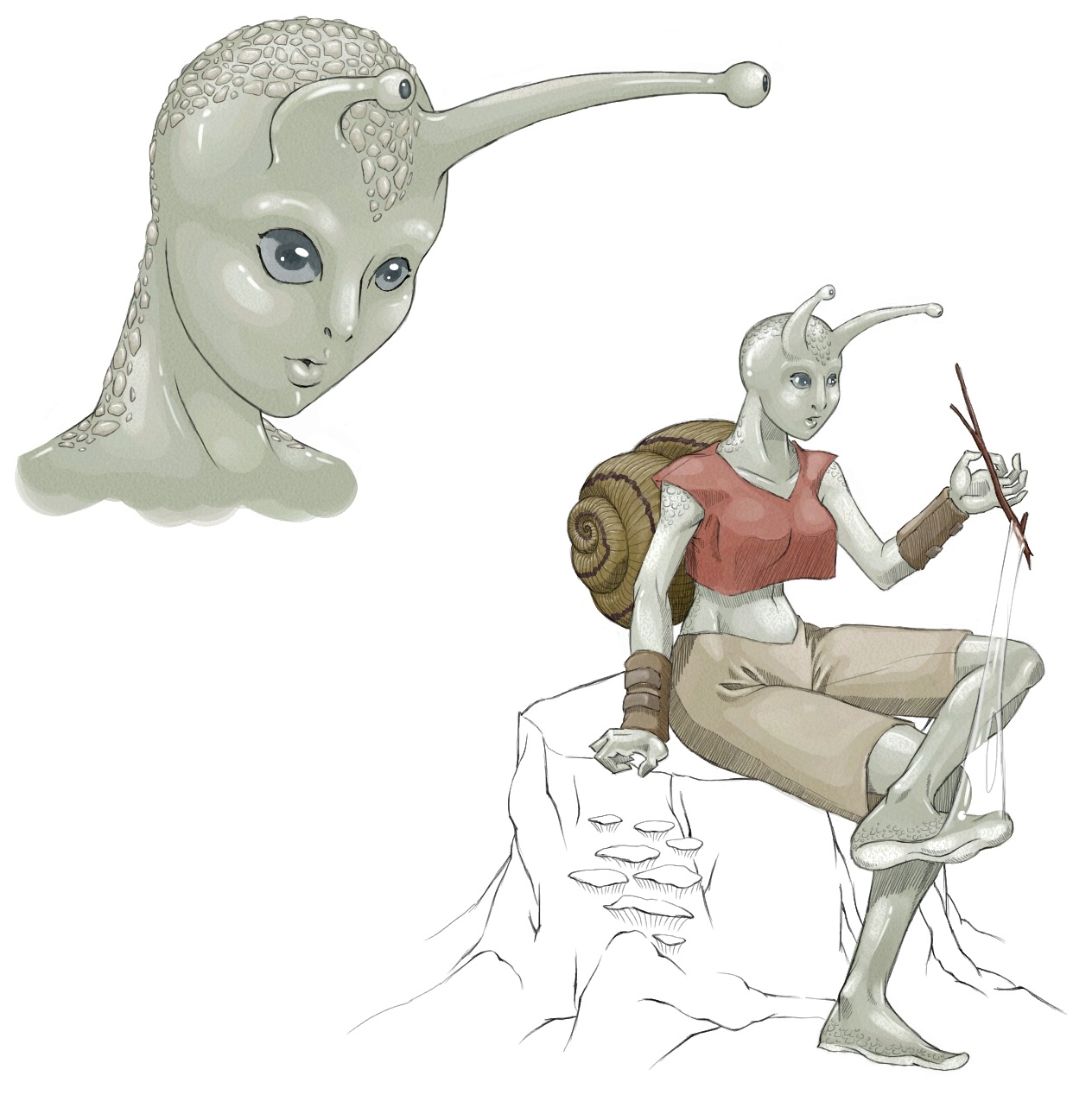 Pulmons, also called Snail-Kin are the product of horrible magical experiments from ancient days. An insane wizard made the first few Pulmon as a gift for the demon god Obox-ob. Obox-ob however was less than pleased with the offering as the creatures were slow and dull-minded. Obox-ob took the wizard's soul, and as a result his creations were left to their own agenda for many hundreds of years.

A Pulmon is generally timid and mellow. They enjoy the simple things that life has to offer such as food, shelter and company. They will hardly ever go out of their way for fame or wealth unless such things bring them the necessities they already seek.

All Pulmon are hermaphrodites and look mostly androgynous with leanings toward feminine features. The average Pulmon is approximately 5'5" and around 120 lbs. Pulmons are very rarely if ever thin or skinny. A Pulmon's slick, sometimes slimy skin ranges from a dark, soil-brown to shades of gray or even white. Pulmons have two humanoid eyes as well as two, foot long eye-stalks protruding from their hairless heads, right above the forehead. Their eyes are most commonly black or dark shades of cool colors. All Pulmons have a large spiral shell on their backs that houses many of their vital organs. Shells can vary in color and patterns greatly depending on climate and region. Pulmons have two arms and two legs, their hands are very human save for the lack of finger-nails. A Pulmon's feet on the other hand are quite like their smaller cousin's as they have no toes and the bottom of the foot secretes a thick slime that protects it.

The Pulmon race is very secretive and shy so it hardly gets enough contact with other races to account for. Although through the generations, encounters have occurred and the Snail-Kin have kept the other races in mind. Here is what the average Pulmon might think of the other races.

Humans are chaotic and curious at best, murderous and hateful at worst. We tend to avoid humans as many humans view us as monsters. They kill us when we eat crops from their fields of vegetables. They like to make war on other races.

Elves do not hate as recklessly as humans but are still judgmental of physical beauty. They can be lived with in harmony as long as we don't eat much of their forests. They have powerful magic.

Dwarves are uncomfortable with us because they think we are ugly but, dwarves are ugly to us too. They like the earth and spend all their time there looking for gems and metals. We seldom agree on more than our hatred of goblins.

Halflings are happy to trade with us but few of them accept our hospitality. They are small and like to find excitement and trouble. Most of them like gold coins.

Gnomes like us and are willing to live around us. They are very smart and can make many useful things. They pay homage to nature and have balance in life. They like to make pranks and also eat lost of vegetables.

Half Orcs are violent and excitable. They only eat meat and alcohol but not snails. They are strong warriors but are not smart, and get upset easily. They live with humans and sometimes join human armies for money.

Oozes are the scariest things in the world! They eat us and our food. They cannot be reasoned with and we flee from them.

Other races care little for Pulmons and very few know of their existence. Most tribes of Pulmons will be somewhat hospitable towards strangers that show themselves to be calm and non-threatening.

The vast majority of Pulmons are true neutral. They are sometimes good but, they are never lawful.

Pulmons tend to live in places that have heavy rain or lots of moisture such as jungles, marshes, and temperate forests. Pulmons generally live in small tribes that are really large family groups, most are secluded settlements far away from human or goblin lands. Once a settlement becomes too large for the local environment to support it, roughly half of the residents will form a migration to settle a new territory somewhere close by. Tribes are governed almost always by the eldest Pulmon there, which is usually the parent of many of the current residents.

Some Pulmons live among other races. This is rare however as most races, if not outright hateful are just uncomfortable with the physical appearances of Pulmons. When they are accepted into society they tend to lead quiet lives that revolve around some sort of daily routine.

Pulmons are not religious by any means but are well aware that the gods have a great influence over many of the other races. They believe that Pelor, the sun god hates them and that is why many humans do as well. Few Pulmons become clerics, if they do worship gods they are usually deities associated with water, plants, earth, or nature; Pulmon paladins do not exist.

Pulmon were created by a wizard that was killed soon after their inception. Thus they speak their own language; Pulamote. A language that borders on telepathic between Pulmons but cannot be spoken or understood by all but the strangest of other races. They can pick up all other languages and seem to enjoy speaking common. Their speech is slow and thoughtful, never hasty or impulsive.

Pulmon names are always given in Pulamote which means a Pulmon's true name is only ever known by beings that can understand Pulamote. Those that encounter other races with any degree of frequency tent to choose names that resemble words they hear from the race they deal most with. However, their lack of acute hearing means they often pick muffled sounding words for names. Examples are: En, Ooth, Lum, Waj, Rul. They don't have different genders and thus, names can sound either masculine or feminine, or somewhere in between.