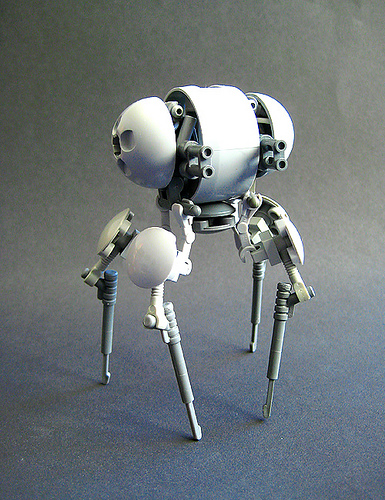 These small guys are deadly in swarms.

The horrid spider-like clicking of legs were coming closer, closer. Trying to escape, you turn the corner, and suddenly a red beam of laser light washes over you. At the end of the long hall, you see it... so small, almost cute. It chirps in a friendly childlike voice, "I found you!"... before you realize you're surrounded by them. And then the guns start firing.

The AP-1948 "Pop Bee" construct is an anti-personnel security robot decided to "keep the peace" in conquered war zones. Dimly intelligent, they have the calming voice of a child and a curiosity which many find "cute". However, when ordered, they become deadly hunters chasing opponents in packs, hiding in the shadows, and catching targets off guard, utterly unaware that it is a bad time to greet targets in a friendly way... before blowing them to pieces. They work best in large groups, all about to chatter and communicate with each other.

Usually deployed in groups, they possess remarkable synergy with each other hunting down a target with frightening efficiency. While easy to trick and distract, their sheer number ensures success.

Machine Gun (Ex): The machine gun is a built in weapon which can make multiple attacks if the Pop Bee's BAB is high enough. It does not run out of ammo, shooting bolts of piercing energy. It has a range increment of 90 ft. They may employ the machine gun attack even in melee range without provoking attacks of opportunity.

Lock On (Ex): As a move action, a Pop Bee can lock on with a small red laser against a single target in 60 ft. All Pop Bees in the area gain a +1 to attack against that one opponent. Multiple Lock On's stack. Therefore if a swarm of 12 Pop Bees all lock onto the same target, all Pop Bees gain +12 to attack. Through this means, a swarm can fight a very powerful creature beyond their means. A lock on lasts until line of sight has been broken, it is dropped as a free action, or moved to another as a move action.

Precise Gunfire (Ex): Able to place it's bullets just so, a Pop Bee gains it's Dex bonus to damage rolls with its machine gun. This is precision damage, which is ineffective against creature immune to critical hits.

Mari Maru Ball (Ex): As a move action, a Pop Bee can roll up into a tiny ball form which prevents any attacks, but allows it to move rapidly, doubling it's speed. It gains a +10 circumstance bonus to speed downhill, and a -10 penalty uphill. It's size decreases to Diminutive in this state, raising it's AC by 3.

Skills: Pop Bees has a +6 racial bonus to diplomacy, listen, and spot checks.