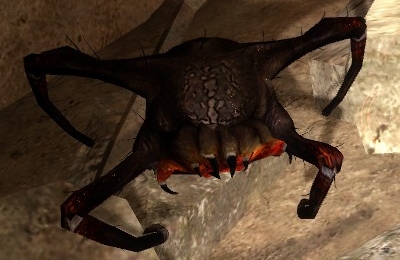 An everpresent threat within the confines of our dystopian cities, the headcrab preys upon our flesh. They are iconic to the threat we face. They represent the immediate danger that the Combine poses to us. The headcrab is not so much a biological weapon, but rather a weapon to break our spirits and leave us shattered, so that when they manage to couple with our heads we will have long since been ready to die.

A headcrab is a predatorial Xenotheric species, whose natural hatching grounds lie within the vast plateaus of Xen. They are however extremely able and adapt to other environs easily, having been injected into Earth's ecosystem with startling resistance to Earth pathogens, and impervious to radiation or toxic wastes. A poison headcrab is a fairly large variant of the headcrab, but shares the same physiology type, bodiless, with powerful and long legs attached directly to the head. The poison headcrab is easily recognized by its much larger size and its black, mottled body. Excluding the long legs, its head is around 20 to 26 inches in size.

Headcrabs hunt as they have always hunted, using their silence and stealth to attempt and surprise humanoid victims. It is believed that they have a heightened tolerance for pain and miss the instinct that would motivate personal survival. It is also believed that headcrabs are able to communicate with other headcrabs through scents that only their olfactory senses can detect (it is encouraged that any DM using this resource in their games make personal decisions about the headcrabs' behaviour for balanced gameplay; making one attract others may lead to more action, but may pose a great risk to low level characters). Despite their larger size, poison headcrabs are themselves quite nimble still and, as their name suggests, their attack is toxic in nature.

Attach (Ex): If a poison headcrab hits a creature of humanoid type with its lunge attack, the recipient must make a Reflex save vs. DC 15 or be head-coupled. A headcrab that critically hits a humanoid creature can instantly attach. A headcrab that is attached to another creature is effectively grappling that creature and is considered to be head-coupling him. Poison headcrabs have a +16 racial bonus on grapple checks when attached (already figured into the Base Attack/Grapple entry above). An attached headcrab may be struck or shot with a weapon, or grappled itself. The save is Dexterity based. The restriction of one headcrab attached per humanoid body does not apply to poison headcrabs, who tend to swarm and cover their victims with up to five of them at once, creating a horribly disfigured poison zombie at death. Helpless creatures cannot prevent a headcrab from attaching.

Head Couple (Ex): An attached poison headcrab will attempt to couple with the head or indeed, the body of its victim, whittling down his health in the process and continuing to inject its lethal toxin. If it starts a round while attached to a humanoid creature, it deals a base damage to that creature of 1d8 plus poison. When a headcrab couples its victim's head, it is considered to have rolled a natural 20 on its attack roll. Thus, during the act of head-coupling, a confirmation roll must be made to ensure a critical hit. If the headcrab crits, the damage it deals that round is 2d8 (plus poison), naturally. When a humanoid creature dies while being coupled by a headcrab, or when a sufficiently intact corpse is coupled later on, a headcrab can extend its neural impulses through the corpse's nerve system through microscopic recepticles on its beak and legs, taking control of it as a neonate 'headcrab zombie'.

Lunge (Ex): All headcrabs can attack their victims with a lunge attack. The headcrab lunges itself at its target, foregoing convenstional reach. This gives any melee attack that the creature makes a maximum reach equal to 5 + ½ the creature's Jump modifier. If the creature misses its target, it flies on in its general direction of movement unimpaired, traveling yet again the same distance as it did to reach its target, before landing again (in case of obstacles, the creature's path is stopped prematurely with no harm to itself). For example, a headcrab attacking a target 10 feet away from itself misses. As a result, it travels another 10 feet before landing on the opposite side of the target, given no obstructions are encountered. If a headcrab hits with its lunge attack, but fails to couple, it lands in the square adjacent to the target after dealing its damage.

Overwhelm (Ex): Being a parasitic creature with many, many peers, poison headcrabs can usually count on backup in the form of more headcrabs. Headcrabs gain a bonus of +1 to their attack roll for each headcrab that targets the same creature. For example, if five headcrabs attack a single human, they all gain +4 to their attack roll. Bonuses gained from this special ability can never exceeed +5, even if more than six headcrabs attack the person at the same time. This bonus considers all headcrabs that attack the same person; normal headcrabs and fast headcrabs share the same advantage when assisting their poisonous peers.

Poison (Ex): Injury, Fortitude DC 15, initial and secondary damage 1d4 Str plus 1d4 Dex. The save DC is Constitution based.

Skills: Headcrabs get a +12 racial bonus to Jump checks and are always considered to have made a running start for the purpose of jumping (even although they cannot run). Their instinctive stealth tactics also lend them a +4 racial bonus to Hide checks in the dark.