The platypus was created when a group of mages were performing chimera experiments. The experiment went awry, creating a race anthropomorphic platypus. Platypi resemble their animal counterparts, save for their humanoid features (Opposable thumbs, walking erect, and the ability to speak for example). 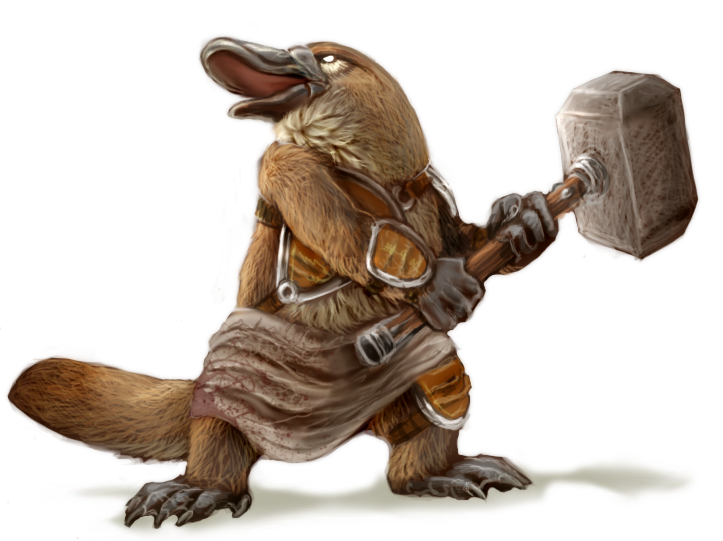 The average platypus is fairly well-natured and often happy with a happy-go-lucky outlook on life. They tend to tell jokes to lighten mood and are not insulted by jabs at their appearance, they may even join in. To speak in the common tongue is very difficult since they can't form the right shapes with their mouths and often seem to have lisps and other speech impediments.

Platypi are about the height of dwarves but lighter in weight, with the females being only slightly shorter and lighter than the males. They generally have brown fur, but can also have variations of dark red and very rarely, white or grey. They also have duck bills and beaver tails like the animal.

Platypus Men resemble, well platypi, save for their humanoid features (Opposable thumbs, walking erect, and the ability to speak for example).

Few platypi are jealous of the fairer races but they get along well enough. They have a special bond with halflings and gnomes because of their similarity in height and their love for jokes.

They tend more on the chaotic side due to the nature of their creation, but can be any alignment.

Platypi don't generally have official towns and cities but usually take up residence in human cities. Those who don't live in cities live alone or in small groups near or in rivers and other small bodies of freshwater.

Most platypi aren't religious, but those who are worship either Garl Glittergold or Olidammara.

Common, Platypus. Platypus is an extremely difficult language for most races to learn since it's spoken in various combinations of squeaks and clicks.

Since they rarely live with their own people, platypi either have human names or nicknames given to them by their friends.