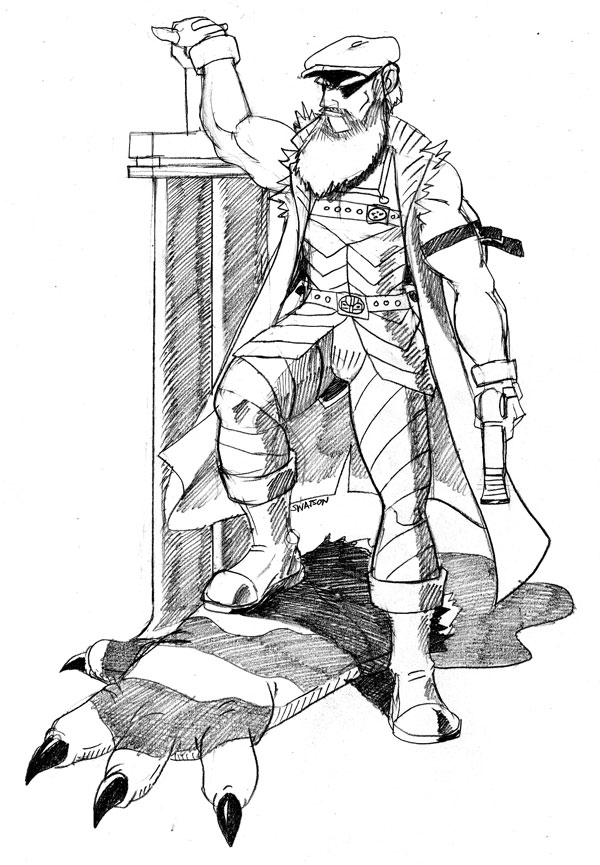 Evasion (Ex): If Perryn is exposed to any effect that normally allows him to attempt a Reflex saving throw for half damage, he instead takes no damage with a successful saving throw.

Nemesis (Su): Perryn has survived fighting Ashram Singh many times, and has learned to evade most of his magical attacks without suffering any harm. Perryn is immune to any damage-causing spell cast by Ashram Singh that would require a Reflex save.

Sneak Attack (Ex): Perryn deals an extra 1d6 points of damage on any successful attack against flat-footed or flanked targets, or against a target that has been denied its Dexterity bonus for any reason. This damage also applies to ranged attacks against targets up to 30 feet away. Creatures with concealment, creatures without discernible anatomies, and creatures immune to extra damage from critical hits are all immune to sneak attacks. Perryn can choose to deliver nonlethal damage with his sneak attack, but only when using a weapon designed for that purpose, such as a sap(blackjack).

Trapfinding (Ex): Perryn can find, disarm or bypass traps with a DC of 20 or higher. He can use the Search skill to find, and the Disable Device skill to disarm magic traps (DC 25 + the level of the spell used to create it. If her Disable Device result exceeds the trap's DC by 10 or more, he discovers how to bypass the trap without triggering or disarming it.

Detect Evil (Sp): Perryn can use detect evil, as the spell, at will.

Smite the Guilty (Su): Perryn may attempt to smite someone whom he has personally witnessed committing a crime in his home city. He adds +2 to his melee attack roll and deals 5 points of extra damage. The smite must occur within three days of the crime; otherwise the benefits of this ability no longer apply. If he mistakenly attempts a smite on someone who is not guilty of the crime witnessed, the benefits do not apply, but the smite counts against the number allowed per day. He may use this ability once per day.

Quick Search (Ex): Perryn may search a 5-foot-by-5-foot area or volume of goods as a move action, rather than a full-round action.

Speak with Dead (Ex): Perryn can use speak with dead once per day, as a 5th-level caster.

Perryn used to be just another thug in the city of Titillation, going about his daily routine. One day Perryn saw a man take a girl into the dark shadows of his gang's turf. He watched as the man transformed into a striped beast and devoured her on the spot. It laughed as it walked from the shadows, exposing itself to Perryn's eyes. It changed into a nobleman and blended into the crowds. Perryn swore he'd make the monster pay and began his career as a vigilante.

With a little coercion, he found the name the beast used and began to scour the city for him. Each time he did find the beast, he narrowly survived the battle that ensued. For each of those times, he found out a little more about his quarry. After facing this monster more than once and living to tell the tale, he is prepared. He carries the weapons to ensure its name is wiped from the world: for his minions a giant's greatsword to sweep them away, and for their foul master a barrage of bullets from his trusty twin dwarven pistols. He engraves each bullet with the name of their target--Ashram Singh--so that they may never miss.