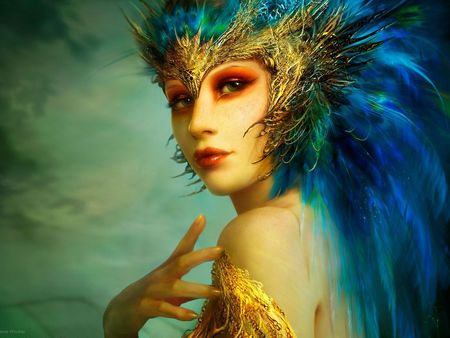 Mother Nature's secrets are seldom unraveled easily, but for those persistent enough to seek the font of beauty incarnate, the results can be extraordinary.

Arcane spellcasters who become peacock sages are almost invariably looking for power. An expanded knowledge and an expanded set of abilities is a logical way to increase one's own power, but there are other reasons, too. Some become peacock sages out of vanity. Others do the same in search of enlightenment, although the former is more common. Most of those who become peacock sages are sorcerers, although the occasional wizard, often an enchanter, will delve down this road as well. The primary attribute for a peacock mage depends on her class background; for sorcerers it is Charisma; for wizards it is Intelligence.

All of the following are class features of the peacock sage.

Spellcasting: At second level and each level thereafter except tenth, the peacock sage gain new spells per day and an increase in caster level (and spells known, if applicable) as if she had also gained a level in a spellcasting class to which she belonged before adding the prestige class levels. She does not, however, gain any other benefit a character of that class would have gained. If she had more than one arcane spellcasting class before becoming a peacock sage, she must decide to which class to add each level for the purpose of determining spells per day, caster level, and spells known.

Favored Spells: To spontaneously cast a favored spell, the peacock sage must have a Charisma or Intelligence score of at least 10 + the spell's level, as well as having a peacock sage level equal to the spell's level. Once these prerequisites are met, a peacock sage may spontaneous cast any favored spell she knows as a standard action by expending a spell slot of equal value. Metamagic feats can be applied to favored spells without increasing their casting times beyond their normal values. Furthermore, the peacock mage casts all favored spells with a +2 bonus to caster level, as well as a +2 boost to save DCs. Note that a sorcerer adds these spells to her spells known list (where they do not count against the sorcerer's normal number of spells known), whereas the wizard gains the ability to case them spontaneously, like a good-aligned cleric with cure spells.

Iridescence (Su): Beginning at first level, when the peacock sage's plumage is active, she is constantly under the effects of a blur spell. This ability may be repressed and reactivated as a free action, separate from the peacock sage's control of her plumage.

Piercing Stare (Su): At third level, the peacock sage's plumage gains darkvision and the ability to see invisible and ethereal within a range of 20 feet, plus an additional 10 feet per class level.

Hera's Favored (Su): When her plumage is manifested, a fourth level peacock sage gains a Charisma bonus equal to half her peacock sage class level rounded down.

Panoramic Sight (Su): Starting at seventh level, a peacock sage's can no longer be flanked when her plumage is manifested.

Quetzalcoatl (Su): An eighth level peacock sage may rip one of the feathers from her plumage in order to summon a couatl, as per summon monster ix. Using this ability causes the peacock sage's plumage to be treated as the plumage of a peacock sage one level below her own. Removed feathers regenerate at a rate of one per twenty four period.

Occam's Razor (Su): The plumage of a ninth level peacock sage discerns truth where falsehoods lie. The peacock sage's plumage grants her true seeing, as per the spell, within a range of a 60 feet.

Combat: A peacock sage usually specializes in monster removal or battlefield control, and can frequently do a bit of both.

Advancement: Becoming a peacock sage is an attractive option for sorcerer's and other Charisma-based spellcasters due to the boosts it can give, and it is also a logical step for many an enchanter. Because of it's relatively steep entry requirements (and therefore late entry), it is more of a complementary class than a class that is complemented by others, although anything that helps a wizard or sorcerer survive is likely to prove useful to a peacock sage. Still, since caster level (and the implications therein) is the primary goal of most spellcasters, sorcerer (or wizard )10/peacock sage 10 (or perhaps 9) is typically what is considered optimal, although other spellcasting-enhancing prestige classes are viable alternatives to more levels of sorcerer/wizard.

Peacock Sages in the World[edit]

NPC Reactions: Peacock sages tend to provoke feelings of awe, often accompanied by feelings of inferiority, jealously, or lust, depending on the exact nature of the NPC.

Characters with ranks in Knowledge (Arcana) can research peacock sages to learn more about them. When a character makes a skill check, read or paraphrase the following, including information from lower DCs.

Peacock Sages in the Game[edit]

Adaptation: Any suitably flashy animal can take the place of a peacock, although it might be difficult to replicate both the flashiness and the eye motif that comprise the core of the peacock sage's class abilities. It might also be possible to adjust the class to the point where it is a viable option for bards as well, perhaps by treating favored spells of seventh level and above as sixth level bard spells. The same could be doable for clerics as well.

Sample Encounter: Josette Laren, a self-absorbed, hubristic peacock sage, plans to seduce the kings of two rivalrous countries and manipulate them into fighting a war over her, all so she can see how many men will die in the pair's attempts to possess her.