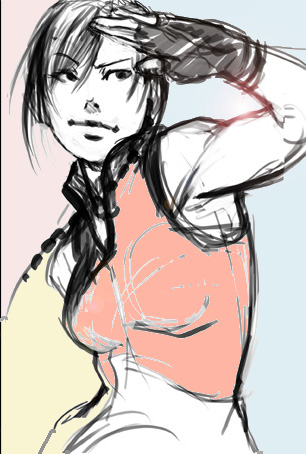 A real animal knows the party doesn't stop til' the sun comes up.

A natural brawler who deals out status conditions with every attack. They are also dedicated party animals and love a good bar-fight. They master the art of the charge and can smack you silly. Of course, most of the victims just say that because they happened to be drunk at the time. This class is pursued strongly by college-age, female babes.

All of the following are class features of the Party Animal.

Weapon and Armor Proficiency: Proficient with the Simple weapons and Light armor.

Personality: Level 1. You gain a +2 bonus to Charisma based checks against members of your own race.

Condition: Anytime a party animal makes a successful melee attack against an opponent she can attempt to apply one condition to her target. She can only apply a maximum of two conditions a round.

A party animal cannot apply a condition which is already affecting the target and cannot lengthen the duration of her effects. The Difficulty Class for a saving throw against a party animal’s attack is 10 + 1/2 class level + the party animals Strength modifier.

Uncanny Dodge: Level 2. A party animal retains her Dexterity bonus to AC (if any) even if she is caught flat-footed or struck by an invisible attacker. However, she still loses her Dexterity bonus to AC if immobilized. If a party animal already has uncanny dodge from a different class, she automatically gains improved uncanny dodge (see below) instead.

Difficult Charge: Level 4. Whenever you Charge you can ignore any difficult terrain.

Improved Uncanny Dodge: Level 6. A party animal can no longer be flanked. This defense denies a rogue the ability to sneak attack the party animal by flanking her, unless the attacker has at least four more rogue levels than the target has party levels. If a character already has uncanny dodge (see above) from a second class, the character automatically gains improved uncanny dodge instead, and the levels from the classes that grant uncanny dodge stack to determine the minimum level a rogue must be to flank the character.

Fascinate: Level 7. You begin to dance, sing, recite, or tell jokes. All desired creatures within 60 feet must succeed a Will save, DC 15+level, or become Fascinated for as long as you continue your action. This ability cannot be used during stressful situations such as combat.

Freedom: Level 9. You can always move and act as if under the Freedom of Movement spell. This effect is always active.

Evasion: Level 10. A party animal can avoid even magical and unusual attacks with great agility. If she makes a successful Reflex saving throw against an attack that normally deals half damage on a successful save, she instead takes no damage. Evasion can be used only if the party animal is wearing light armor or no armor. A helpless party animal does not gain the benefit of evasion.

Drunken Charge: Level 12. You gain a +4 to confirm critical hits whenever you Charge. In addition, you no longer need to Charge in a straight line.

Pounce: Level 16. You can make a full attack on a Charge.

The Personality ability can only be gained at 1st level.

Fist Fighter: If you want to be a fist fighter then your going to need a pair of leather gloves, spiked gauntlets, or metal knuckles. Something you can enchant just like a magic weapon. This will enable you to deal more damage, be more accurate, overcome magic damage reduction, and strike ghastly opponents.

Other Classes: Empathy with all classes.

Party Animal's in the World[edit]

Characters with ranks in Knowledge(local) can research Party Animal's to learn more about them. When a character makes a skill check, read or paraphrase the following, including information from lower DCs.