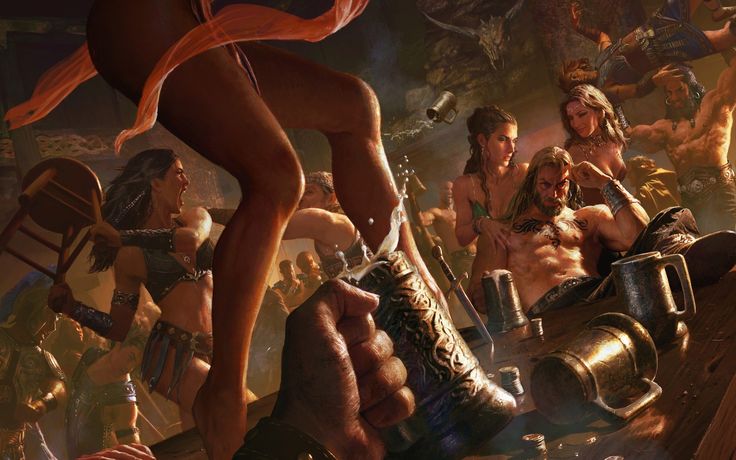 A Party-Animal in his natural habitat

A Party Animal is exactly what it sounds like, they are the life of the party keeping it rowdy and making sure everyone is in good spirits, all the while busting out some sick moves and belting out lines from everyone's favorite songs.

Party Animals are a great support character, they are a well rounded mismatch of fighter, rogue and bard-like qualities boosting the party up, meanwhile doing their own thing and having fun with it be it fighting a big bad, or negotiating their way out of a sticky situation they may or may not have gotten themselves into.

Abilities: The most important ability for a party animal is Charisma.

Races: A party-animal can emerge from any race that enjoys celebrating and partying.

All of the following are class features of the Party-Animal.

Weapon and Armor Proficiency: The Party-Animal is proficient with all simple light weapons, nunchaku, unarmed combat, and improvised weapons, as well as light armor, but not sheilds.

AC Bonus: A Party Animal has an erratic, almost hypnotising style of combat called Dance Battle. At first level they add Cha modifier, at level five and every fifth level after that add an additional +1. This bonus is lost if you are carrying a medium to heavy load, wearing medium to heavy armor, or carrying a sheild.

Improvised Weapon Proficiency: The Party Animal is proficient in any kind of improvised weapon, i.e. anything that can be used to hit people even though this is not the original purpose of the item. Examples are empty or broken bottles, chairs, tables, pool cues, plates... The DM should use common sense to attribute size (light, one-handed or two-handed) and damage type (piercing, slashing or bludgeoning) to an improvised weapon. As for damage, refer to the table below. For example, a broken bottle would be a light piercing weapon, a chair would be a two-handed bludgeoning weapon.

Improvised thrown weapons: The party animal can use any light or one handed improvised weapon as a thrown weapon with a range increment of 10 ft.

Unarmed Strike: At 1st level, a party animal gains Improved Unarmed Strike as a bonus feat. Their attacks may be with either fist interchangeably or even from elbows, knees, and feet. This means that they may even make unarmed strikes with their hands full. There is no such thing as an off-hand attack for a barebones fighter striking unarmed. A barebones fighter may thus apply their full Strength bonus on damage rolls for all their unarmed strikes.

A party animal also deals more damage with their unarmed strikes than a normal person would, as shown on Table: Unarmed Damage by Size.

Life of the Party: Once per day per level, a party animal can use his moves to produce magical effects on those around him (usually including himself, if desired). Each ability requires both a minimum level and a minimum number of ranks in the Perform skill to qualify; if a party animal does not have the required number of ranks in the skill, he does not gain the ability until he acquires the needed ranks. Starting these effects is a standard action.

Distraction: A Party Animal with 3 or more ranks in a Perform skill can use their sick moves to cause one or more creatures to become fascinated with him. Each creature to be fascinated must be within 90 feet, able to see and hear the party animal, and able to pay attention to him. The party animal must also be able to see the creature. The distraction of a nearby combat or other dangers prevents the ability from working. For every three levels attained beyond 1st, he can target one additional creature with a single use of this ability. To use the ability, make a Perform check. His check result is the DC for each affected creature’s Will save against the effect. If a creature’s saving throw succeeds, the party animal cannot attempt to fascinate that creature again for 24 hours. If its saving throw fails, the creature sits quietly and watches the dance, taking no other actions, for as long as you continue to cance and concentrate (up to a maximum of 1 round per level). While fascinated, a target takes a –4 penalty on skill checks made as reactions, such as Listen and Spot checks. Any potential threat requires the you to make another Perform check and allows the creature a new saving throw against a DC equal to the new Perform check result. Any obvious threat, such as someone drawing a weapon, casting a spell, or aiming a ranged weapon at the target, automatically breaks the effect. Fascinate is an enchantment (compulsion), mind-affecting ability.

Egg On: A bard with 3 or more ranks in a Perform skill can egg on in his allies (including himself), bolstering them against fear and improving their combat abilities. To be affected, an ally must be able to hear the party animal. The effect lasts for as long as the ally hears you and for 5 rounds thereafter. An affected ally receives a +1 morale bonus on saving throws against charm and fear effects and a +1 morale bonus on attack and weapon damage rolls. At 8th level, and every six bard levels thereafter, this bonus increases by 1 (+2 at 8th, +3 at 14th, and +4 at 20th). Inspire courage is a mind-affecting ability.

Intoxicant Tolerance: A party animal is used to ingesting intoxicating substances and thus their body processes them differently at level 1 any negative effects that come from ingesting an intoxicant or potion are reduced by 25%, this is increased by 25% per every 5 levels.

Intoxicant Boost: At level 20 a party animal’s body is fine tuned to handle any intoxicating substance ingested, on top of having an immunity to any negative effects of intoxicants or potions, the positive effects are doubled.

Shotgun: The Party Animal can drink a potion as a move action that does not provoke an attack of opportunity. To do that, he must have the potion ready in a belt or a similar, easy to reach place.

Evasion: On a successful Reflex save vs. damage e.g. Breath Weapon, you will take no damage instead of half. Improved Evasion makes it so you will only take half damage on a failed save.

Hype: A party animal of 3rd level or higher with 6 or more ranks in a Perform skill can hype up poetics to help an ally succeed at a task. The ally must be within 30 feet and able to see and hear you. You must also be able to see the ally. The ally gets a +2 competence bonus on skill checks with a particular skill as long as he or she continues to hear the hype. Certain uses of this ability are infeasible. The effect lasts as long as the bard concentrates, up to a maximum of 2 minutes. A bard can’t inspire competence in himself. Inspire competence is a mind-affecting ability.

Improved Uncanny Dodge: At 7th level and higher, you can no longer be flanked. This defense denies a rogue the ability to sneak attack by flanking, unless the attacker has at least four more rogue levels than the target has barbarian levels. If a character already has uncanny dodge (see above) from a second class, the character automatically gains improved uncanny dodge instead, and the levels from the classes that grant uncanny dodge stack to determine the minimum level a rogue must be to flank the character.

Inspire Greatness: At 9th level or higher with 12 or more ranks in a Perform skill you can to inspire greatness in yourself or a single willing ally within 30 feet, granting them extra fighting capability. For every three levels attained beyond 9th, you can target one additional ally with a single use of this ability (two at 12th level, three at 15th, four at 18th). To inspire greatness, you must perform and an ally see or hear you perform. The effect lasts for as long as the ally perceives the performance and for 5 rounds thereafter. A creature inspired with greatness gains 2 bonus Hit Dice (d10s), the commensurate number of temporary hit points (apply the target’s Consitution modifier, if any, to these bonus Hit Dice), a +2 competence bonus on attack rolls, and a +1 competence bonus on Fortitude saves. The bonus Hit Dice count as regular Hit Dice for determining the effect of spells that are Hit Dice dependant. Inspire greatness is a mind-affecting ability.

Inspire Heroics: At 15th level or higher with 18 or more ranks in a Perform skill you can inspire tremendous heroism in yourself or a single willing ally within 30 feet. For every three levels the character attains beyond 15th, he can inspire heroics in one additional creature. To inspire heroics, you must perform and an ally must see or hear the performance for a full round. A creature so inspired gains a +4 morale bonus on saving throws and a +4 dodge bonus to AC. The effect lasts for as long as the ally hears the bard sing and for up to 5 rounds thereafter. Inspire heroics is a mind-affecting ability.

A Party Animal who's alignment changes to any non-chaotic alignment temporarily loses all Charisma bonuses to AC, as well as losing their Life of the party abilities, uncanny and improved uncanny dodge and evasion, and is prevented from taking any further levels in the party animal class until alignment is returned.