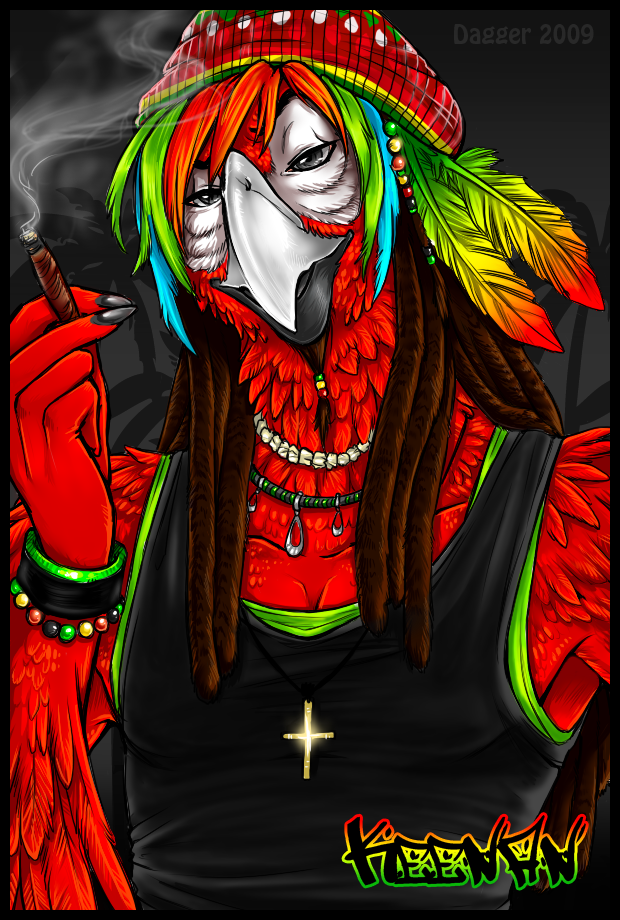 Papago are a race of brilliantly-plumed avians from a small, tropical island in the southern portion of Arcas. The papago were designed off the basic structure of the raptorans to tend the island and maintain the tropical paradise the island’s shaper had built. However, the papago were not as successful as their relatives, and saw only limited use among the southern islands. When the shapers left, the papago were mostly unchanged, though perhaps they took longer naps. However, only 20 years ago, the Papago were displaced from their original island home by a fierce, sudden attack by an army of kuo-toa and a terrible storm giant warlord. Displaced, the papago are trying to put down new roots and muster the forces to retake their home.

The papago are a friendly, likeable, and extremely laid back race of hedonists and pleasure-seekers. They enjoy good food, long naps, and smoking. They particularly enjoy smoking ghostleaf, an herb from their homeland known for it’s relaxing and euphoric effects. Papago are generally considered to be lazy, but they can be quite capable in and out of combat when the need arises. Since their displacement, the papago have become somewhat more driven.

Papago stand between 5’6” and 6’0”, with slight, lightweight builds. They generally weigh between 100 and 120 pounds. They have thick, hooked beaks designed for crushing. Their bodies are covered head to toe with brightly colored feathers. Their feathers can be blue, green, bright red, purple, and gold, in all sorts of patterns and combinations. They don’t have hair so much as a number of long, flexible feathers emerging from the tops of their heads. These long feathers are particularly colorful. When fully outstretched, their wings span 10 to 12 feet, although papago (when not flying) are more comfortable with them folded behind their backs. An interlocking series of ligaments allows papago to lock their wings in the outstretched position, enabling them to glide for long periods without tiring Papago hands are much like human hands, but with thick, pointed, almost clawlike fingernails. Papago legs bend both ways, usually bending forward for normal walking, and bending backward when climbing and flying. Their legs below the knee are usually yellow, with scale-like skin and ending in four-toed talons, with three forward claws and a toe claw that can fold against the side of the foot for normal walking or shift around to the back to perch and grasp. Each toe ends in a short black claw, designed for gripping.

Papago are extremely friendly. They make friends quickly and travel easily among the common races. They get along on a personal level with goliaths, but they can rarely physically perform to the standards set by the hulking brutes. Dwarves and raptorans find their laid-back attitude distasteful, and elves kill them on sight. The halflings get along with them quite well, and many caravans include a papago.

Papago are almost entirely chaotic, with only a rare few showing lawful traits. Most papago are neutral, but the good papago drastically outweigh the evil.

Papago have no true homeland anymore. They originated on a Paradise Island in the southern area of Arcas, an island where the resident shaper eliminated predators and pests, filling it with brilliantly colored flora and fauna. However, this changed when a kuo-toa army led by a titanic storm giant emerged from the water, and, in a matter of days, had slain, captured or driven off all the papago. The papago now make themselves at home on a great many islands in the southern end of Arcas, and have even spread to more distant lands.

Papago speak a heavily modified dialect of Tuilvilanuue known as Paradiso. The langauges are similar on the surface, with both sharing a musical structure, a love of long, complex words, and a simplistic grammar. However, the two share very little vocabulary, with paradiso often inventing entirely new words for things. Paradiso is written with halfling annotations attached to elven shorthand.

Papago names are usually simple, with a personal name and a clutch name, which is shared among all the children born from a single nesting.

Papago adventurers were extremely rare before the invasion of their homeland, though there was a healthy tradition of bards. However, the papago displaced by the kuo-toa invasion are much more likely to take up the mantle of adventurer.

•Medium: As Medium creatures, papago have no special bonuses or penalties due to their size

If a papago becomes unconscious or helpless while in midair, their wings naturally unfurl and powerful ligaments stiffen the wings. The papago descends in a tight corkscrew and takes only 1d6 points of falling damage, no matter what the actual distance of the fall.

papago can safely fly for a number of rounds equal to their Constitution modifier (minimum 1 round). They can exert themselves to fly for up to twice as long, but then they’re fatigued at the end of the flight. Papago are likewise fatigued after spending a total of more than 10 minutes per day flying. Because papago can glide before, after, and between rounds of actual flight, they can remain aloft for extended periods (even if they can only use flight for 1 round at a time without becoming fatigued). When they reach 10 Hit Dice, papago have enough stamina and prowess to fly for longer periods. They can fly at a speed of 40 feet (average maneuverability), and flying requires no more exertion than walking or running. A papago with flight can make a dive attack. A dive attack works like a charge, but the papago must move a minimum of 30 feet and descend at least 10 feet. A raptor an can make a dive attack only when wielding a piercing weapon; if the attack hits, it deals double damage. A papago with flight can use the run action while flying, provided she flies in a straight line.