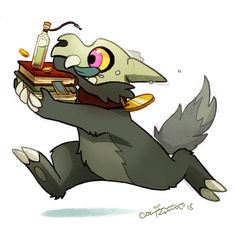 Extremely prideful and full of energy. Often a provoker in conversations though loyal to friends. Paolumus love to be around company and see them selfs as "better" than others. Often favored by witches and warlocks as amusing and useful companions. Often the pride a Paolumus has is the main reason they find them selfs in tricky situations.

Paolumus both male and female have the same appearance in size and shape. They are small and fluffy, with black fur and a half the head being covered in bone. Despite the cute appearance of the Paolumu they have an innate connection to infernal magic allowing them to make pacts with other creatures in exchange for loyalty, gifts or warship.

Paolumus get along with most races though they tend to be hated by some churches for being a demon.

Tend to lean towards neutral.

Paolumus tend to not warship gods/goddesses. They tend to see them selfs as similar creatures.